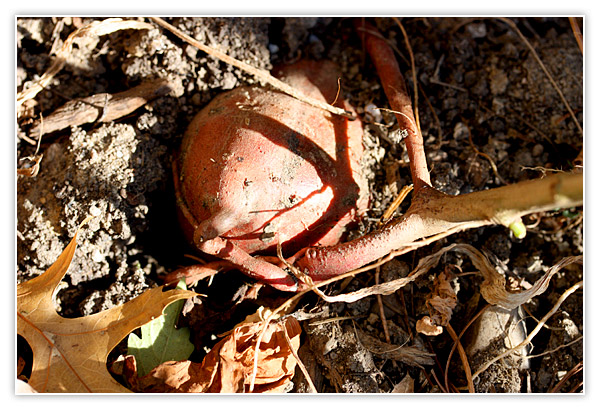 SoupAddict looked at the calendar Sunday morning and, realizing it was 10/10/10, decided she could no longer put off addressing her gardens. September was more or less an idle gardening month, spent wishing for rain, wishing for temperatures below 90°, and putting up every fresh vegetable and herb she could get her mitts on.

But now it’s October, and it’s time to start reversing the process started in May, back when the sun was bright and not so painfully low in the sky at rush hour, and the days were getting longer rather than shorter. Booooo.

After a disappointing but somewhat comical potato harvest, SoupAddict has been dreading pulling up her sweet potatoes. It should be noted, however, that sweet potatoes and white potatoes are only very distantly related, so her comparison of one crop’s success to the other is fairly ridiculous. But you’ve come to expect such things of SoupAddict, so ridiculous conclusions should not be a surprise.

After pulling up yards and yards and yards of vines out the sweet potato bed in the side yard, as well as out of the tomato gardens in the backyard … has SoupAddict successfully conveyed that sweet potato vines are looooooong? … SoupAddict grabbed her pitchfork and, looking very unfarmer-like in her pale pink Crocs, proceeded to unearth potato after potato.

A sweet potato and gruyere souffle is in SoupAddict’s future, yesssireee.

Sweet potato trivia: sweet potatoes are vining, flowering plants related to the Morning Glory. SoupAddict can attest to this relationship, as she once left a sweet potato forgotten on the window sill, where it sprouted and bloomed before it met its fate. 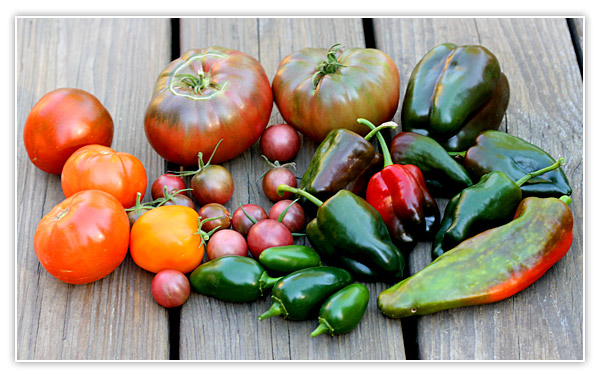 Most of SoupAddict’s gardens are still producing, and this is a typical October day’s harvest, which is somewhat of a bummer, because SoupAddict’s freezer is already completely stuffed with preserved food to the point where she’s pricing out standalone freezers. SoupAddict’s philosophy is, you can never have too much homemade tomato sauce. 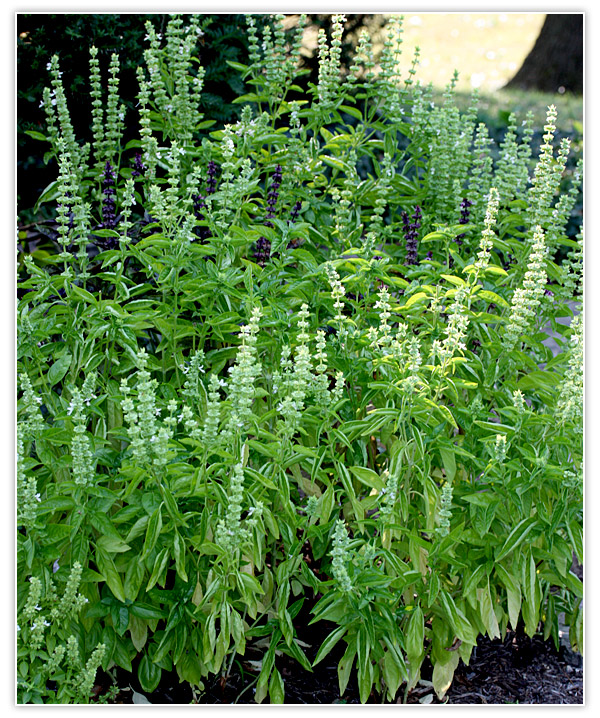 SoupAddict’s basil garden did surprisingly well this year, considering the heat and the drought. There is much pesto still to be made and frozen, but in the meantime …

SoupAddict is usually indifferent to storage products and brands, but she does love the Press’n Seal wrap by Glad, if for no other reason than it allows her to conduct her harebrained food preservation experiments. (Although quite honestly, the average hare might just applaud such an effort to save greens for the winter, making “harebrained” a compliment. So. There.)

SoupAddict was positively tomatoed under this year. She started out canning tomatoes but grew quickly tired of having her weekend afternoons consumed by the waves of hot fog rolling out of the kitchen into a house straining to stay cool in the face of 90° weather. Eventually, she switched over to freezing tomato sauce, which allowed her to introduce all manner of fancy-pants sauce preparations, like roasting the tomatoes first, or seasoning them in olive oil and white balsamic vinegar, without having to worry about upsetting the botulism-prevention formula required by canning.

A jar of Flamme tomato sauce that will one day grace some dish or other.

SoupAddict has also been freezing peppers like there’s no tomorrow. She uses an awful lot of peppers in her soups and is always shell-shocked by the price of winter peppers. As in, $2.00 each for a sweet red bell pepper. Now, everytime SoupAddict opens her overloaded freezer, little bags of frozen, matchstick-sliced peppers leap to the floor.

(As SoupAddict proofreads this post before publishing it, she finds herself giggling at the paradoxical first sentence above: “… freezing peppers like there’s no tomorrow.” Take a moment to enjoy the futility implied in the effort of preserving peppers.)

Sweet bells (above), poblanos, holy molés, peperoncinis, jalapeños and serranos. No pepper was safe from SoupAddict’s knife this summer. 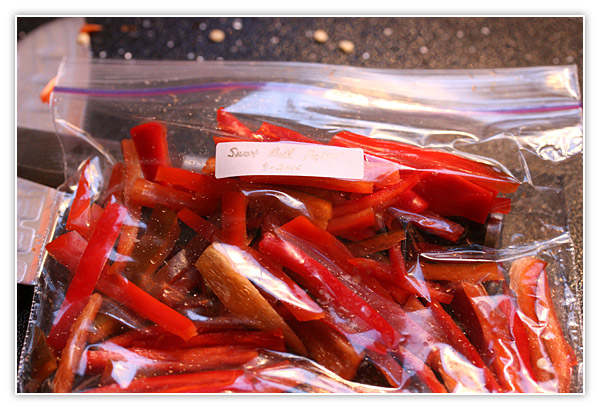 The only problem with freezing peppers was that the stickers SoupAddict used as labels did not actually remain adhered to any of the bags once they were frozen.

And, as she discovered after the first time that several bags of green sliced peppers leapt out of the freezer with their detached labels flittering to and fro around the kitchen, some peppers look an awful lot alike when they’ve been cut into short, thin strips. Mystery Pepper Soup might land on the menu sometime this winter….

[...] I not only grow them myself, but I also prepare them in all sorts of savory ways: baked chips topped with salt and [...]

Soup Addict... Try putting labels inside the bag when freezing vegetables... I'm a newbie to your site and love it.

I still laugh to myself, remembering the sight of those labels fluttering to the floor. Some lessons are learned the hard way!

Don't you DARE change your blog in any way! I love it just the way it is. Someone needs to go on with their bad self. :)

SoupAddict, I love your website and third-person voice just as they are. It is your voice, as a matter of fact, that makes me laugh so frequently (my favorite so far was the Chocolate Pecan Caramel Tart recipe). The Hot Crash Potatoes were a huge hit and I look forward to more great dishes and information. Thank you!

Aw, thanks, Darlynne - what nice things to say! But, the fact is, I can be annoying, so the only flaw I can find in that criticism is that it's a statement of the obvious. Otherwise, I have no defense against it. Except maybe, "Nuh uh!" Which really isn't much of a defense. So I'm both lame and annoying.

I just adore looking at your photos. After a very poor gardening year here, it's a treat to see such beautiful produce. We had our first hard frost on 10/10, so Fall really is here. At least the weather is just perfect for baking now. Yippeee!

Hard frost on the 10th? It was 87 degrees here! I'll tell you what I adore: a King Arthur Flour email (or better yet, the catalog) landing in my box with photos of your cookies. The cookie cutter email? Fuhgetabowdit. (I cracked up in your blog post at Frank's tip to remember to breathe ... it's so true!).