SoupAddict was feeling goofy this week and wanting to make decorated cookies. Which she never does because she definitely lacks the decorated-cookies-talent gene. Which you will soon see. 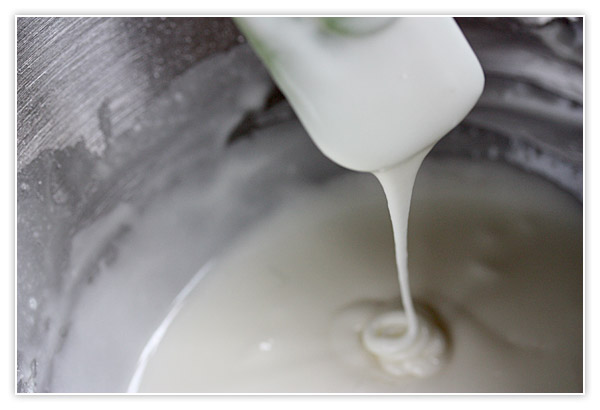 First up were the eyes. SoupAddict wanted her mummy to have eyes. The only thing creepier than a mummy is a mummy looking at you. Or maybe a zombie looking at you.

It’s a toss-up, really. Either way, it’s a dead thing coming at you with its eyeballs hanging out.

SoupAddict was extremely disappointed that neither Michael’s nor Hobby Lobby carry sugar eyes. So she had to make her own. Bring in the royal icing. Very easy to make (thank you, KAF), and the eyeball bases turned out perfectly. 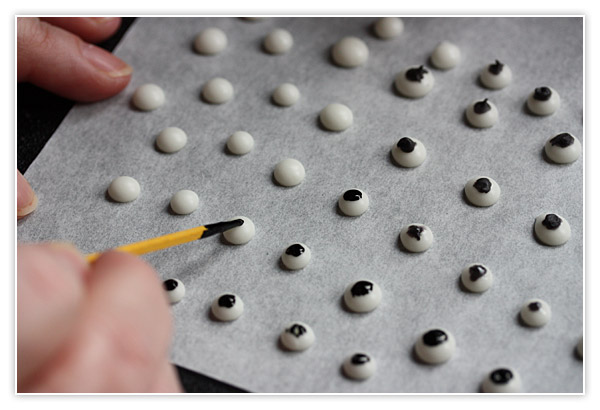 But here’s where it went wrong. If SoupAddict had not been so pouty over the absence of sugar eyes at Michaels, she would’ve remembered the edible food markers. Which would’ve made painting on pupils a snap.

Instead, she tried two different things: black royal icing pupils (which were impossible to pipe cleanly) and smearing on black food color gel. Which seemed like a terrific idea, until SoupAddict discovered that, three days later, the gel still hadn’t dried. Which makes no sense because SoupAddict is a long-time [former] user of gel food colors and it is her experience that those containers dry out quickly even when tightly sealed. So, she just doesn’t understand how gel that has been exposed to the air for three solid days could still be wet.

Make sure you use a cookie dough recipe that doesn’t spread during baking, like this one. Otherwise, your mummies will look like snowmen. SoupAddict loves this cookie’s sandy texture, and with a few drops fiori di sicilia, it’s just delicious. 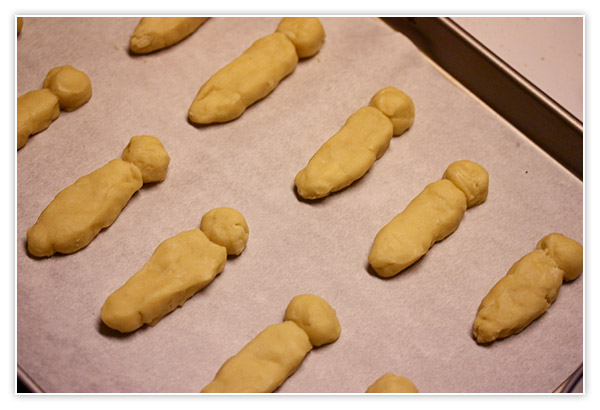 Form the cookies in two parts: first, use a small ball of dough for the head, then, take a larger glob of dough to form the body.

Word to yo mumma: do not overheat and do not stir white chocolate ganache. This is the lumpy mess you get. Heat gently (microwave’s okay, just go low and slow with it). And then whisk it with a whisk. Word. 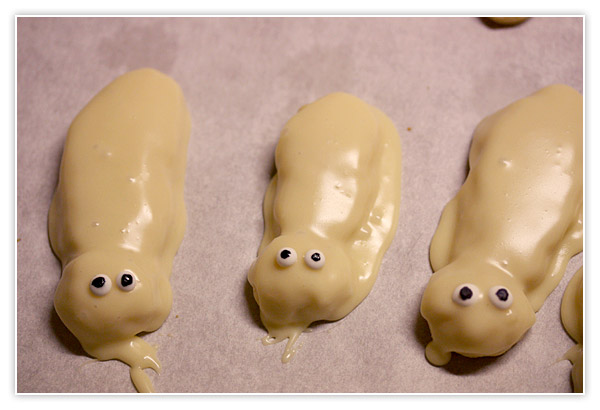 AAaaack! It’s the attack of the albino tadpoles – Everybody rrrruuuuun!

The smooth ganache is self-correcting, so lumps will smooth out and flow neatly into any craters in the cookie.

Professional cookie decorators have nothing to fear. SoupAddict will not be stealing their jobs any time soon. It is kinda cute, though. And totally yummy.

5shares
Did you make this recipe? Take a photo, post it on social media and tag me, @soupaddict. I'd love to see how you made it your own!