The humble soba noodle is the perfect carrier for a homemade, quick and easy, extra peanutty Thai-inspired peanut sauce. So simple to pull together, peanut soba noodles are a tasty lunch or weeknight meal. 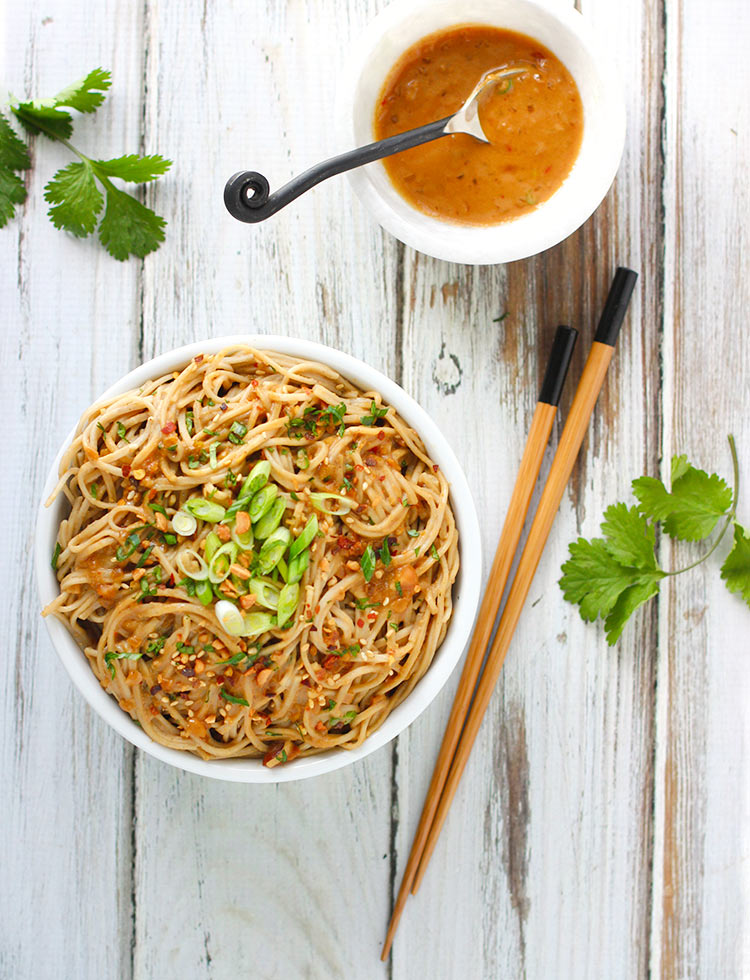 Isn’t amazing how much memory power food holds with us? Smells from the kitchen can bring back happy times. (And if you have strong food aversions, like I do — shredded coconut! — certain textures can bring back, uh, let’s just say, not so happy times.) But peanuts, at least, have always held great nostalgic value for me. Hope you don’t mind a way-back-when story that involves baseball (pitchers and catchers report in two weeks! A sure sign of spring…).

In my junior high days, straight-A students were rewarded with two tickets to a Reds baseball game at the old Riverfront Stadium. They were nose-bleed seats, for sure, but it didn’t matter. My dad would buy a bag of roasted peanuts-in-the-shell from the guy walking up and down the stairs yelling “PeaaaNUUTS!” and we’d sit there in the steamy summer twilight, cracking open the shells one by one (shells with three peanuts were the best!), sipping Coke — Coke on a school night, I doubt my mom ever knew that! — eyeballing the game now and then, but mostly watching the people in the crowd.

This was the era of the Big Red Machine, so whenever we heard the unmistakable “!crack!” of ball-meeting-bat in a serious way, it was always worth looking up to see what section of seats the homerun ball was screaming towards. And if the game finished early enough, we’d stop for a quick snack at Arby’s (back when the Arby’s street sign was a biiiiig brown cowboy hat with lights blinking all around the edges).

I’m about the same age now as my dad was then, I have to tell ya, I’m so amazed and grateful that he would cart me downtown for such a random thing as free baseball tickets. I’ve become a heavy duty introvert in adulthood — or come to realize that I have, is more like it, thanks to the interwebs and its recent fascination with this topic — just like my dad was. The thought of getting off work and hauling stakes across town, dealing with parking and all those cars, and walking to the stadium and the crowds, and standing in line at the concession stand and all.the.crowds … holy moly, that’s just too much for me. I can only imagine the mental energy it must’ve taken for my dad to do that.

So, me and Reds games and Dad. That’s all mixed up with my love of the peanut, and it’s impossible to think about the one without remembering all the others. Anything I make with peanuts in it is automatically going to be a-okay in my book. 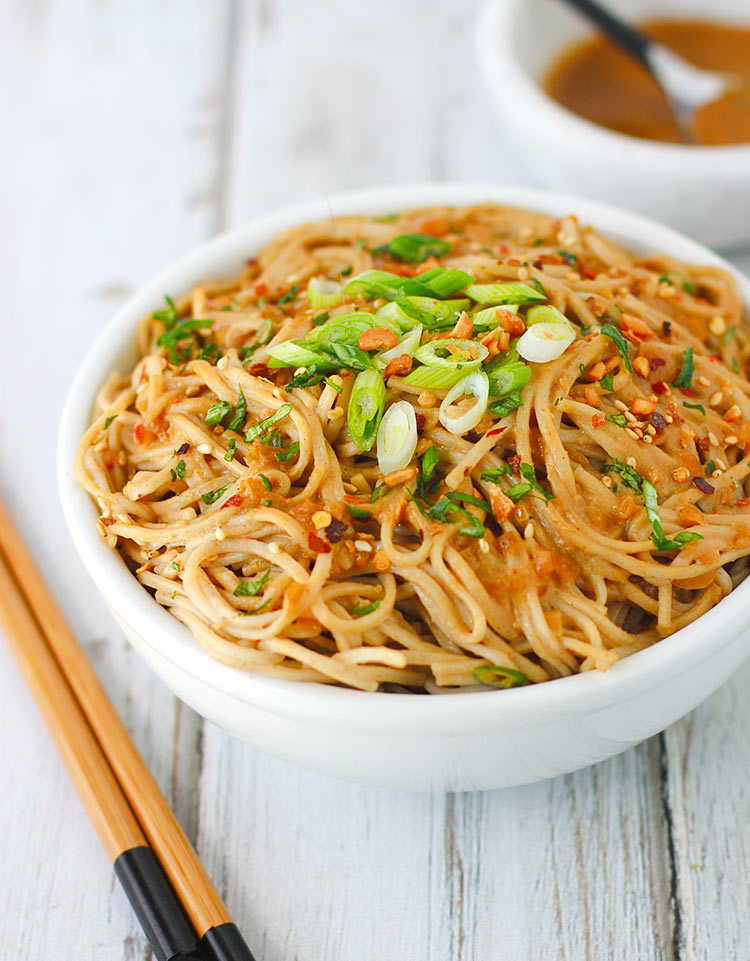 And doubly a-o-dokey-kay when that peanutty thing is a sauce.

For all of you crunchy-peanut-lovin’, noodle-eatin’, food-in-bowls appreciatin’ foodies, I hope you’ll enjoy this homemade version of peanut soba noodles!

for the peanut sauce

for the noodle bowls

for the peanut sauce

for the noodle bowl

*If your grocery store is anything like mine, you'll be confronted with several different types of "chili sauce" in the Asian/Thai section. If you already have a favorite (such as sriracha or Tobasco), go with it! My suggestion is to choose either the chili garlic sauce, which is hot, or the milder sweet chili sauce. Also, if you're a big fan of heat, don't hesitate to double or triple the quantity. My goal here was gently spicy, but do make it your own!
Nutritional information, if shown, is provided as a courtesy only, and is not to be taken as medical information or advice. The nutritional values of your preparation of this recipe are impacted by several factors, including, but not limited to, the ingredient brands you use, any substitutions or measurement changes you make, and measuring accuracy.
820 shares
Click here to cancel reply.

These noodles are wonderfully presented. Searching for Thai peanut noodle recipes online, these are some of the best looking out there.