A long, slow simmer of mushrooms and vegetables, with select herbs and spices, creates a deeply flavorful soup base while you’re off doing other things. Use rotisserie chicken to keep prep and clean-up to a minimum, without skimping on taste. Slow Cooker Chicken Chili Soup is the perfect chilly weather dinner!

For a soup blog, it surprises some peeps that this site is not dripping with slow cooker soup recipes. It’s not that I’m not a fan of the slow cooker (I have three of them, after all), but at Casa SoupAddict, it’s a tool with a specific use … and that use is not always best for soups.

In fact, in some cooking circles, the slow cooker is viewed as a cheat, a silly device that produces substandard meals and has warped an entire generation of home cooks who grew too attached to their cans of cream of mushroom soup. I remember one phone conversation with a local cooking school instructor, who asked how I make soup stock. My answer — “with a slow cooker” — was met with a chilly, judgmental silence, and I think we both left the conversation giving each other mental eyerolls, lol.

The truth is, a slow cooker is an awesome tool for making soup stock (and in a blog post coming soon, I will share my secrets for making the best stock, ever). The slow simmer draws out the flavors of the vegetables and herbs into the soup broth, softening the vegetables in the process, which is usually what you want in a soup. 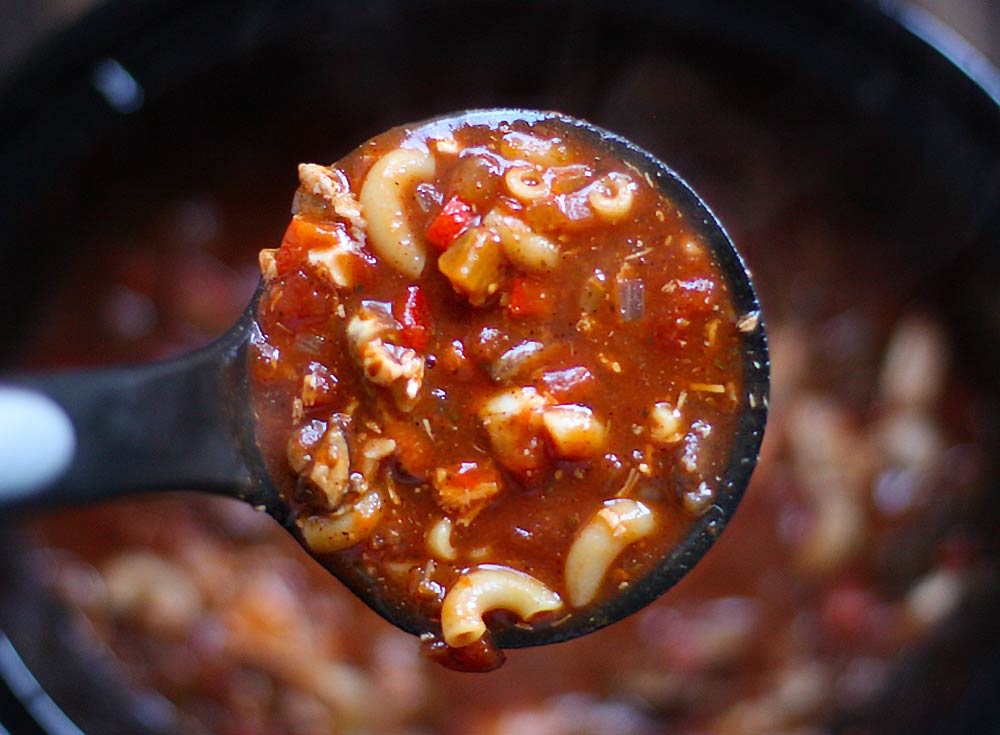 So that’s what we’re doing today with my slow cooker chicken chili soup: we’re using the slow cooker to create a highly flavorful soup base, with lots of veggies, mushrooms, herbs, and spices.

But I will quickly address one of the naysayers’ objections about the slow cooker: chicken. From a strictly depth-of-flavor perspective, it’s true that the slow cooker is not a BFF to chicken. Chicken, in general, does not do terribly well with a long stretch of braising or boiling. Oh, the flavor is definitely drawn out, but it is literally extracted, leaving behind dull, chewy, and — counter-intuitively — dry meat.

That’s a topic for another day, though. For this recipe, we sidestep the issue entirely and use rotisserie chicken, commonly available today at grocery stores, and add it at the end, which means that we can leave the soup base to simmer for as long we want, while adding a chicken flavor boost via leftover chicken bones from the rotisserie chicken. 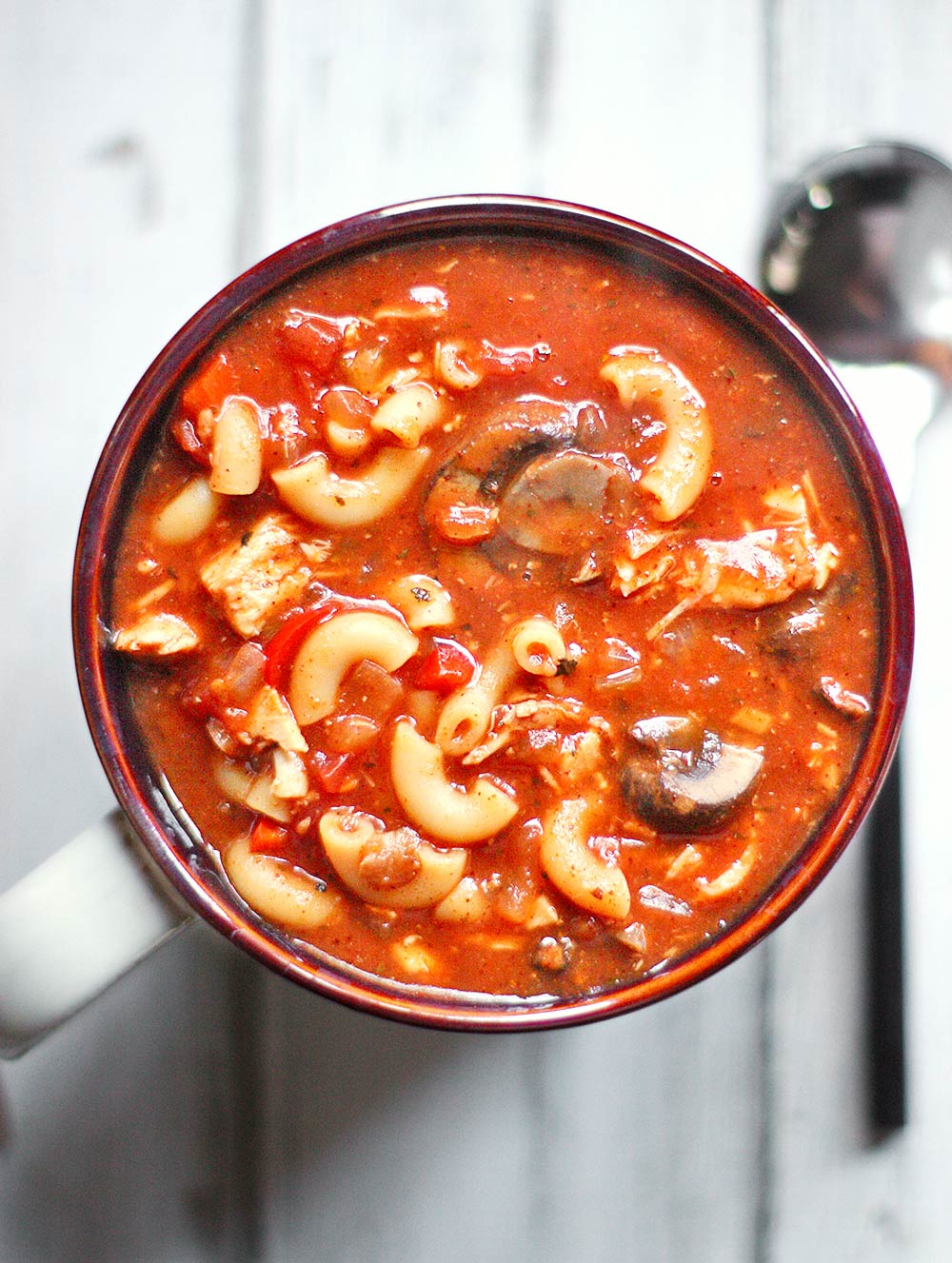 Speaking of flavor boosts, another technique that’s key to many soups is what’s known as blooming the spices. Dried spices such as cumin, paprika, chili powder, and curry powder, get a kick-in-the-pants revival when they’re sizzled in hot liquid for a few minutes. No need to turn to the stovetop, however: by preheating your slow cooker while you prep all the ingredients, it will be hot enough to bloom the spices in a bit of the chicken broth. See my video at the top of the post for the quick how-to. 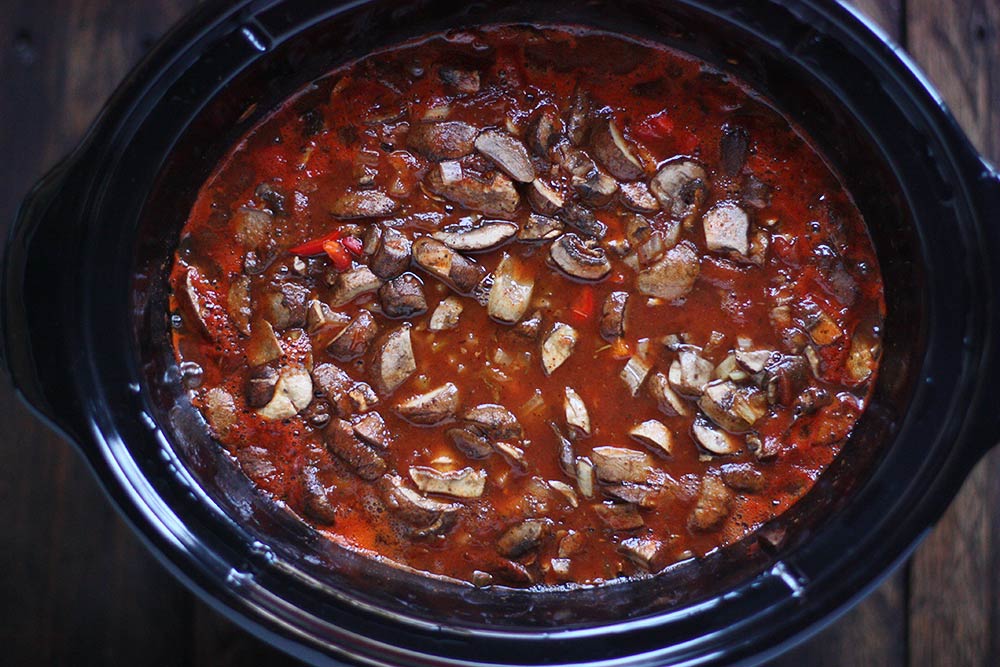 Finally, to guild the lily, I always add pasta to my slow cooker chicken chili soup because = filling meal in itself. Although highly recommended, consider it optional if you need a meal that’s gluten-free.

Oh, and if you don’t have a slow cooker, enjoy my stovetop version, which inspired today’s recipe.

Calories: 367kcal
Nutritional information, if shown, is provided as a courtesy only, and is not to be taken as medical information or advice. The nutritional values of your preparation of this recipe are impacted by several factors, including, but not limited to, the ingredient brands you use, any substitutions or measurement changes you make, and measuring accuracy.

The best soups I've made were cooked in my electric pressure cooker. Chicken gives up its favor without drying out, and stock becomes so flavorful in such a sort time. I'm using chicken feet to make the stock like my grandmother used to make, and it's amazing. I now can buy really cheap cuts to make my own stocks in less than an hour. I just can't use boxed or canned stock any more, because they just taste so salty. I think you'd like it.