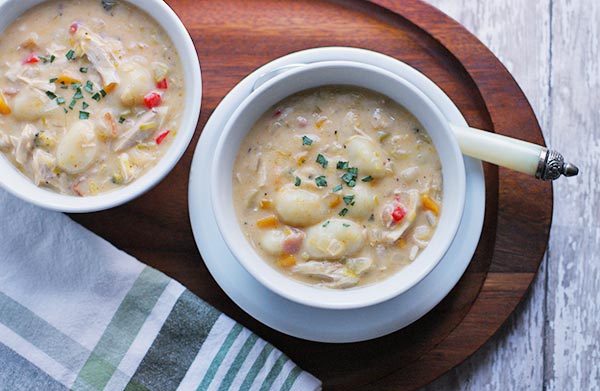 The first official crazy shopping weekend of the holiday season is officially behind us. Know what I did?

Except for a few trips to the grocery store — always safe from Black Friday crowds — I hunkered down in my home as though the White Death itself were barreling down I-75, threatening to cover the world in a blanket of winter puff.

I’m not so much with the crowds these days. The last Black Friday I participated in, not only did I come home with no packages, but also with fewer clothes on my person than when I left the house (true story). All of which goes against the general goals of Black Friday, I think. Part me from my money, yes. Part me from layers of my personal, poly-cotton-fiber-blend exoskeleton, probably not.

But, no complaints here, with all the hiding. I love these little planned exiles. I cooked. I worked on freelance projects. I watched some Dexter and Walking Dead reruns (the holiday spirit abounds. 🙂 ).

I ate in the living room in front of the TV. I didn’t use coasters.

Pajamas were the uniform (although my pajamas are yoga-ish leggings and a super snuggly thick long-sleeved Henley). I briefly considered going all twenty-something and wearing my jammies to Kroger, but I have neither Uggs nor long hair to wrap into a sloppy up-do. Both essential for the “look.” (Oh, and actually being twenty-something, which I am not.) All-in-all, it was better for the world that I pulled on jeans first. 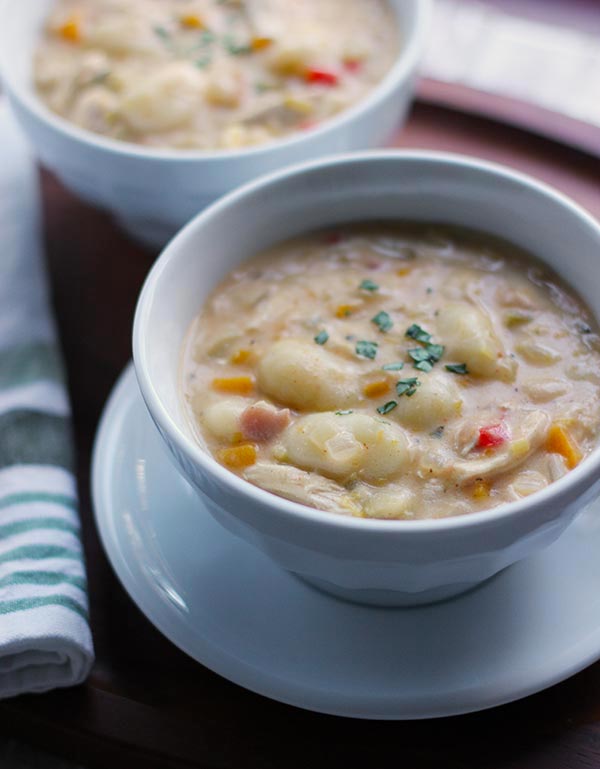 And like I said, I cooked. A lot. Super delicious salads and vegetable roasts, which will eventually make their way here to SoupAddict. I know it’s only December 1st, but I’m already starting to crave greens. Big time. I’ve noticed it happens earlier and earlier every year. If you have a heavy-food foodie hangover every January like I do, stay tuned to this blog: I will have the cure.

But in the meantime, there’s lots of Christmas baking to do, and New Year’s party appetizers to plan (New Year’s Eve is fast becoming one of my favorite celebration days — small group of besties; home field advantage; unapologetic booze and appetizers). 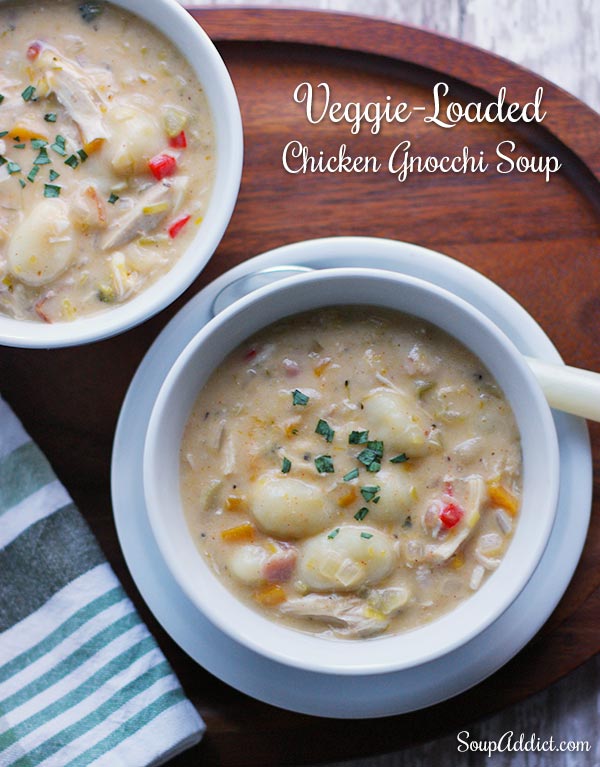 Regardless of the month, there’s always soup. As long as there’s any kind of chill in the air, hot and hearty soup will always be tops in my book.

Today’s recipe, vegetable chicken gnocchi soup, is one of those lovely meals where the prep is a light exercise in familiar, repetitive movements, with time to stare off into the middle distance while stirring, deep in thought.

I personally like knife work — chopping vegetables is relaxing to me. If for you, not so much, feel free to use frozen. Three of the five veggies in this recipe came from my freezer (preserved from my garden loot). Frozen veggies sometimes get turned-up noses from the locavores, but they’re often far superior to salt-laden canned vegetables from the store. (Check the labels on your favorite brand and compare it to its frozen twin.) Frozen vegetables are usually flash-frozen very soon after harvest, with no additives or preservatives needed.

If you have leftover cooked chicken (as I did) — or even turkey! — toss it in. The gnocchi and vegetables create a filling soup on their own, but your carnivore peeps will like the added hit of protein.

Was a huge fan of your couscous chicken soup but in the mood for a change tonight so I tried out this recipe... well oh my God this is so delicious! Substituted carrots as well for the squash and they were great. A really hearty soup that the whole family loved. Thank you!

Just made this soup tonight for dinner... Yummy! Substituted carrots for the squash and added a bit of dried basil. Wish I had some fresh or frozen spinach... Next time for sure. My kids loved this and thought potatoes would be a good substitute for the gnocchi for a change of pace... Soup has great flavor, just be sure to adjust the seasoning to your taste. Paprika makes this soup such a beautiful color. If you have a choice, choose smaller gnocchi rather than large ones... It's just easier to eat in a soup. Thanks for the recipe!

Can you make this without the dairy? Maybe soy milk instead? Or how would it be without any dairy substitute?

How about coconut milk? It's one of my fave substitutes in soups.

Very rich dish with a lot of healthy and different ingredients. Right stuff for these cold days. I will definitely tray to cook it this weekend. Thank you for great idea.