You are here: French Fridays with Dorie » Beef Daube, or, Fancy Pants Stew

In a month when food positively shines, SoupAddict has had real difficulty getting anything done behind the stove.

Her visions of an army of cookies turned into a mere few dozen, plus some very meh brownie buttons that she didn’t even bothering sharing. It’s Christmas Eve Eve and she still doesn’t have any sweets prepared for the Big Day. (She also doesn’t have her grocery shopping finished. Ask her how thrilled she is at the prospect of going to Kroger on Christmas Eve.)

She wanted to distribute her signature sweet — loaves of Chocolate Babka — as gifts. Not one was made. Not even the dough.

SoupAddict spent some time this morning trying to scrub the “L” off her forehead, but it’s still there, big and bright. And accusing. Sometimes the universe is not very subtle with its messages.

Universe: “What did you bake this holiday season, SoupAddict?”

Universe [slaps them out of her hand]: “Unacceptable! What else?”

SoupAddict: “Oh, I made chocolate truffles. Those were good.”

SoupAddict: “Nothing! Nothing nothing thing! I suck, okay? Leeeme alone!”

Guilt is in plentiful supply this holiday season.

Dinner, however, still miraculously makes it to the table. And this recipe from Dorie Greenspan seemed just the thing to do on a Sunday afternoon: slice the veggies, brown the meat, then settle it all in the oven for a long winter’s roast. 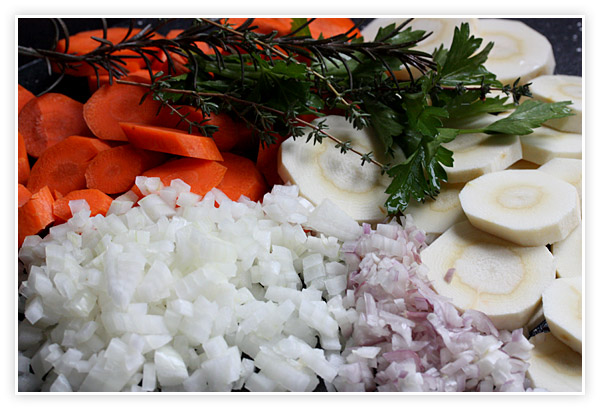 The recipe calls for the carrots and parsnips to remain almost whole, but I like my veggies sliced into thick disks.

This recipe also uses a bouquet garni, which made SoupAddict sigh heavily.

Straight ahead is my rosemary bush, and in front of that is the thyme, buried in the snow.

The things foodies do for fresh ingredients…. 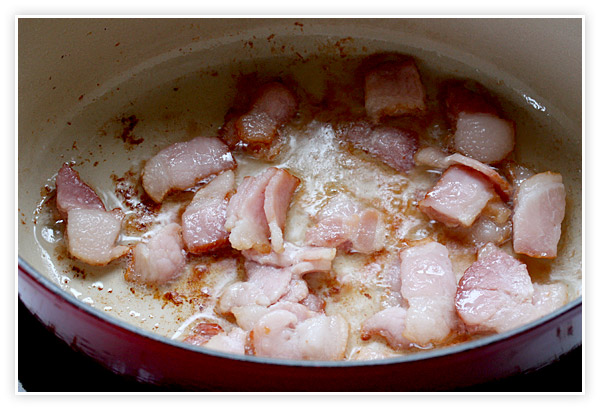 But bacon makes it all better. Bacon makes everything better. 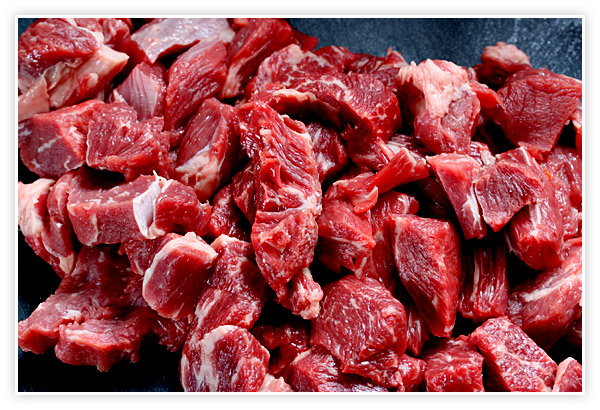 Chuck is a lovely cut of meat for stew. Its connective tissues break down nicely during cooking to produce a fork-tender dish. 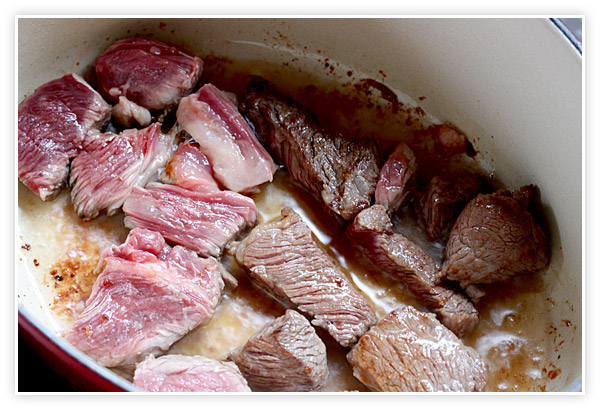 Brown the beef thoroughly. Note that this is the most hands-on part of the recipe: make sure you add enough time if you’re on a schedule. Browning is deceptively time-consuming.

This stew’s delicious sauce is magically created from cognac and red wine. Not a single ounce of beef broth. The goodness is all in the booze, bay-bee. I also added a generous tablespoon each of tomato paste and fish sauce after the onions finished simmering, for an extra savory kick.

Halfway through cooking time, the meat is tenderizing nicely and the liquid is starting to reduce.

All done – glossy and gorgeous.

SoupAddict is generally not a big fan of stew, but this was absolutely delicious and satisfying. Next time, I’ll cut the meat into smaller, 1-inch cubes. This is purely a personal texture preference — it will go better over egg noodles.

Center a rack in the oven and preheat the oven to 350°F.

Put a Dutch oven over medium heat and toss in the bacon. Cook, stirring, just until the bacon browns, then transfer to a bowl.

Dry the beef between sheets of paper towels. Add 1 tablespoon of the oil to the bacon fat in the pot and warm it over medium-high heat, then brown the beef, in batches, on all sides. Don’t crowd the pot—if you try to cook too many pieces at once, you’ll steam the meat rather than brown it—and make sure that each piece gets good color. Transfer the browned meat to the bowl with the bacon and season lightly with salt and pepper.

Pour off the oil in the pot (don’t remove any browned bits stuck to the bottom), add the remaining tablespoon of oil, and warm it over medium heat. Add the onions and shallots, season lightly with salt and pepper, and cook, stirring, until the onions soften, about 8 minutes. Toss in the garlic, carrots, and parsnips, if you’re using them, and give everything a few good turns to cover all the ingredients with a little oil. Pour in the brandy, turn up the heat, and stir well so that the brandy loosens whatever may be clinging to the bottom of the pot. Let the brandy boil for a minute, then return the beef and bacon to the pot, pour in the wine, and toss in the bouquet garni. Once again, give everything a good stir.

When the wine comes to a boil, cover the pot tightly with a piece of aluminum foil and the lid. Slide the daube into the oven and allow it to braise undisturbed for 1 hour.

Pull the pot out of the oven, remove the lid and foil, and stir everything up once. If it looks as if the liquid is reducing by a great deal (unlikely), add just enough water to cover the ingredients. Recover the pot with the foil and lid, slip it back into the oven, and cook for another 1 1/2 hours (total time is 2 1/2 hours). At this point the meat should be fork-tender—if it’s not, give it another 30 minutes or so in the oven.

Taste the sauce. If you’d like it a little more concentrated (usually I think it’s just fine as is), pour the sauce into a saucepan, put it over high heat, and boil it down until it’s just the way you like it. When the sauce meets your approval, taste it for salt and pepper. (If you’re going to reduce the sauce, make certain not to salt it until it’s reduced.) Fish out the bouquet garni and using a large serving spoon, skim off the surface fat.

Serve the beef and vegetables moistened with sauce. SoupAddict likes it over mashed potatoes or egg noodles.

Storing: Like all stews, this can be kept in the refrigerator for about 3 days or frozen for up to 2 months. If you are preparing the daube ahead, don’t reduce the sauce, just cool the daube and chill it. Then, at serving time, lift off the fat (an easy job when the daube’s been chilled), reduce the sauce, and season it one last time.

This post is participating in French Fridays with Dorie, a blogging project where we cook our way each week through the recipes in Dorie Greenspan’s new cookbook, Around My French Table

. Given the book’s newborn status, we’ve been requested to not post the recipe (although SoupAddict will post it if she finds it elsewhere on the web). SoupAddict hopes that you’ll understand and will perhaps be inspired to either buy the book or seek out a recipe of a similar nature to try on your own. Or better yet, join us on French Fridays with Dorie!
23shares
Did you make this recipe? Take a photo, post it on social media and tag me, @soupaddict. I'd love to see how you made it your own!