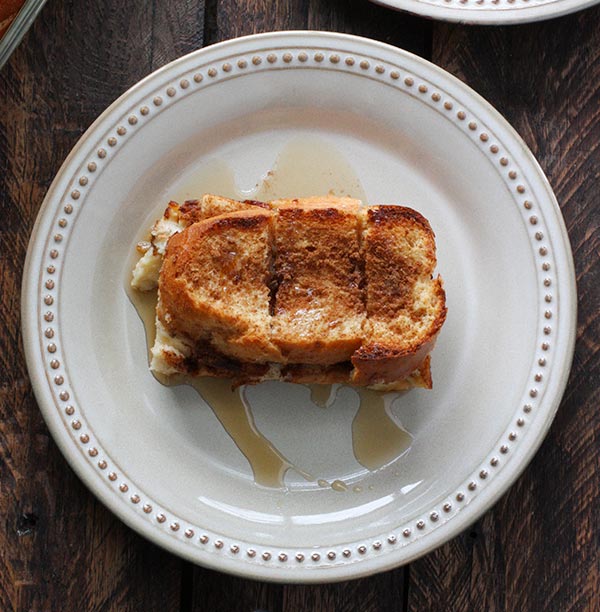 Apologies in advance to the folks who don’t like bread puddings, because I seem to be on some kind of bread pudding tear this autumn. Just one more, and that’s it, I promise! Today’s recipe is a Casa SoupAddict tradition: baked French Toast on New’s Years morning, prepared the night before.

In case you hadn’t made the connection, French toast is just pan-fried bread pudding: bread, custard, spices, heat. Traditional French toast — seared up on a hot griddle — is a bear of a dish. For two people, no prob. For a family … pans, everywhere. And somehow I always run out of custard before bread slices.

I don’t know who first thought to shove the whole thing into the oven, but they should be food-sainted. Seriously. It’s just brilliant. Breakfast for 8, assembled the night before, practically hands-off the morning of the bake. 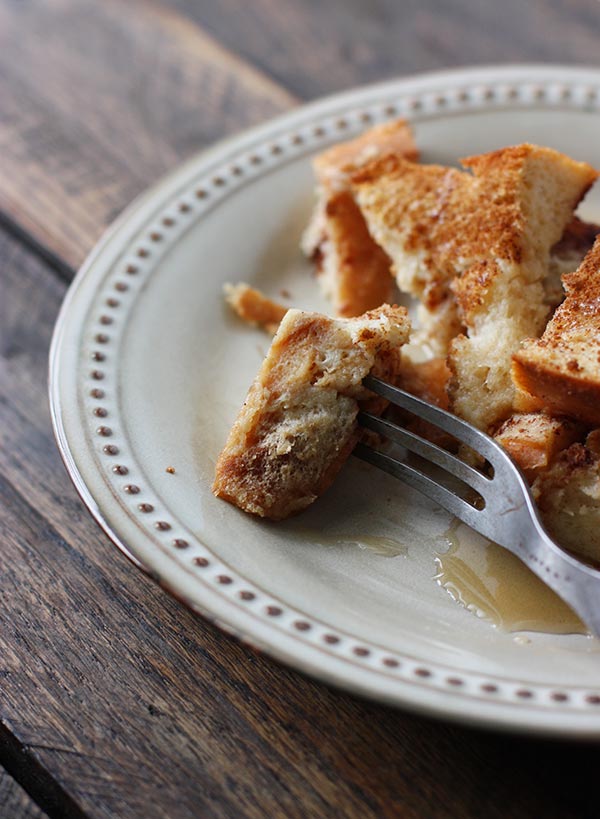 Judging by the glut of eggnog-in-food recipes on the interwebs right now that are all intro’d with some variation of “I don’t like to drink eggnog straight-up, but I love it in desserts,” I’m not alone in my general indifference to the classic holiday drink. But, when you think about it, it’s the perfect ingredient for baking: it contains milk, eggs, sugar, and sometimes alcohol. 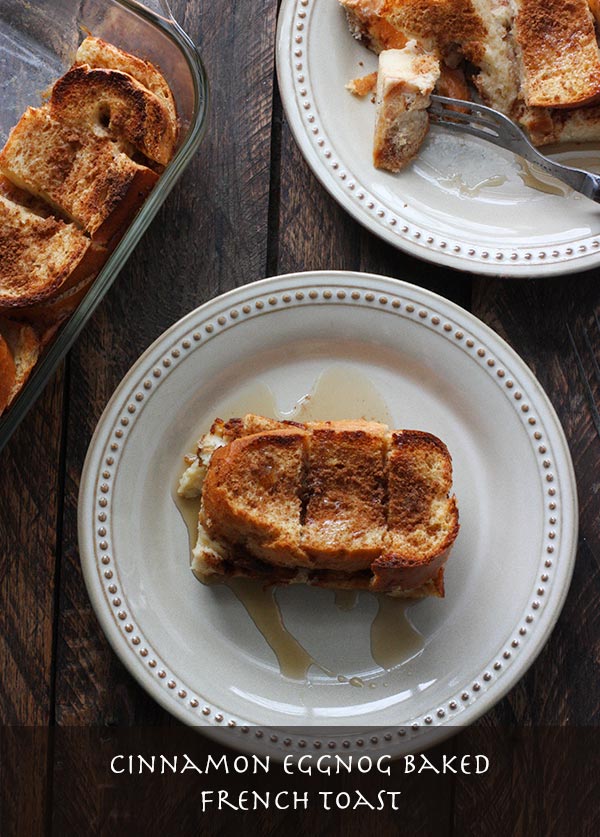 And it works perfectly for baked French toast custard. Not overly-eggnoggy, but definitely a hint of holiday spirit. Especially when you add, uh, holiday spirits. Brandy is my favorite hair-of-the-dog flavoring, but I’ve also done variations with Grand Marnier (orange!), rum, Baileys, and even Kahlua. And the smell of cinnamon permeating your home as it bakes will wake up even groggiest of sleepyheads.

Or, if you’ve got kids in the house, skip the booze, and add more vanilla extract (or some almond extract). Or orange zest. Or blueberries. It’s all good. And totally make-ahead easy. Perfect for entertaining a house full of hungry guests.

Over the years, I’ve changed up the recipe a bit to refine the texture. Originally, the bread was completely immersed in the custard. To introduce a bit of the pan-seared texture, I reduced the amount of custard so that the top layer of bread cubes are exposed. They crisp up a bit in the oven, adding a nice little crunch to the works.

for the bread pudding and custard

Karen, I'm very happy to bake with eggnog--especially when I see it marked down and we buy a bunch of it (too much to drink). This looks especially yummy and festive for Christmas morning. Thanks!

Yes! A version of this has been our Christmas morning lunch for the past several years. I knew there was a reason I liked you!

I keep seeing recipes for some version of eggnog French toast coming across my reader, and I really love the idea. Guess I'll just have to try it! :) I agree with you, baking with eggnog is so fantastic. Though I do enjoy drinking it, IF the store has my preferred brand (Jim Beam). Otherwise, I feel rather "meh" towards it too.

That looks perfect! I've got a bunch of people staying overnight in a few weeks and this is breakfast!