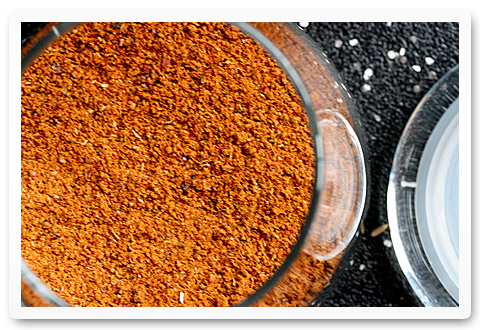 You know how lovely it is reach in your jeans pocket—the ones you haven’t worn in a while—and pull out a forgotten $10 bill? And you get that shiver of excitement over found money?

That’s kind of what it’s like for SoupAddict when she finds a blog post she started long ago but never finished. And then forgot about. But found again.

(Okay, it’s not exactly like finding money, because Starbucks won’t accept a partially finished blog post in exchange for a peppermint white chocolate mocha. But, it still made SoupAddict happy.)

SoupAddict can’t begin to remember why this post was left unfinished, other than perhaps she couldn’t bear to look at even one more picture with snow in it.

But now that it’s firmly Springtime, and snow won’t be coming anywhere near this region for at least 6 months, she feels safe and secure enough to reminisce about the day she made this chili powder.

Now, why would anyone make their own spice blends when you can’t turn around in a store without knocking over some rack or other of “gourmet” blends? The answer is simple: time.

Go to your spice rack and grab the first store-bought bottle you come to. When was that particular spice ground from its whole form and packaged in that bottle? It doesn’t say, does it? Was it three months ago? Six? Two years ago? Ground herbs and spices begin to lose their potency immediately. By the time 12 months pass, they are mere shadows of their former selves.

SoupAddict made the recent mistake of sticking her nose into a bottle of Herbes de Provence at her mother’s house. (This is the same bottle that was around in SoupAddict’s childhood, memorable by its flowery label.) Epic fail. You know that burnt dust smell that comes out of your furnace the first time you turn it on for the winter? Better than this. SoupAddict was traumatized the remainder of the day, and had fits of psychosomatic sneezing at unfortunate moments.

It’s fresh or bust, is SoupAddict’s philosophy on spices.

Grinding your own spices also has the advantage of price: it’s much cheaper to buy bulk spices in their whole form. And some are really easy to grow on your own. In this picture, the oregano and coriander seeds come from SoupAddict’s own gardens. 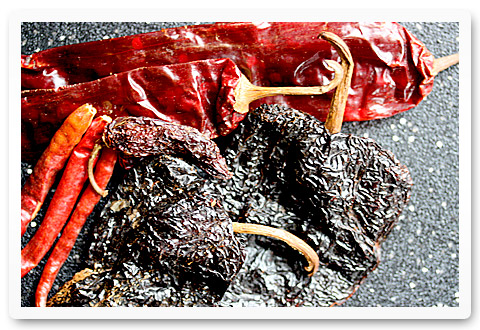 Dried chilies are ever so nice. You can purchase them in big bag, and they last for a long time. SoupAddict grows and dries her own cayenne and poblano peppers (which are renamed “ancho” peppers when dried). If you can’t find the peppers listed in this recipe in your area, try Penzeys.com, or substitute with other peppers of similar heat. It’ll work out fine.

Ah, you devilishly hot little rascals. Much of the heat in a pepper is housed in its seeds and ribs. SoupAddict cuts open the pepper pods and shakes out the seeds. She’s wimpy that way.

Place all of the chili pods, coriander and cumin seeds into a large flame-proof frying pan. 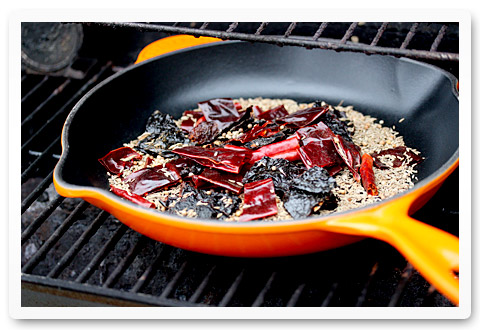 And do this next part … outside … on your grill. Pepper fumes are not to be taken lightly. Invisible though they are, they’re still vicious.

See what SoupAddict means about the snow? [shudder] This is what was left of SoupAddict’s 2009 garden – leeks – which wintered over just lovely and lasted well into Spring. 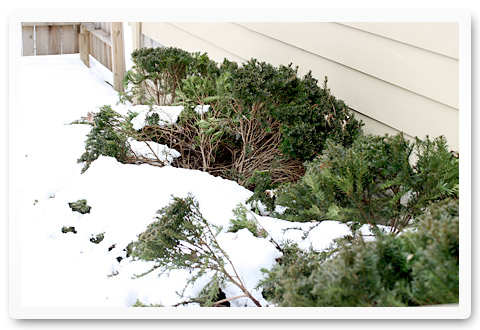 The wet snowfall on this particular day wreaked havoc on all sorts of shrubbery. These did recover, though. Which was kind of a bummer, because SoupAddict really does not like these bushes, but can’t bring herself to kill living things for no reason. She was hoping Mother Nature had taken matters into her own hands.

Okay, back to the subject at hand. Grill the peppers and spices over medium-high heat, stirring frequently. When it becomes fragrant – and you’ll know it when it does – remove from the heat.

And allow to cool completely. Here, freezing cold concrete does the trick quite nicely. 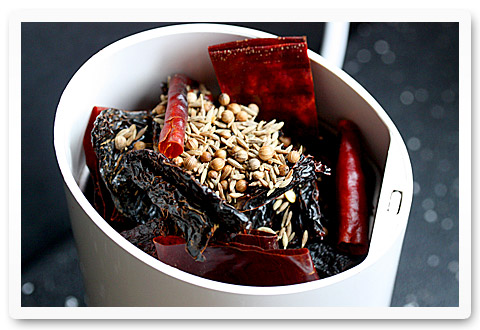 Load the peppers and seeds into your spice grinder, and pulse until a coarse powder. You’ll probably have to do in batches.

After the last batch, add back the ground peppers and seeds, plus the garlic, oregano and paprika. Pulse to mix everything well.

Store in an airtight jar in a dark, cool place. (SoupAddict redid her spice rack last winter, and she absolutely adores these glass jars from Libbey

. They come in different sizes, and the small ones (like the jar on the right and in the photos at the top) are perfect for herbs and spices. The seal is tight, and measuring spoons fit right in.)

Instructions:
Slice each of the dried chili open and remove the seeds (or, if you’re a glutton for punishment, leave them in. Seeds are the primary source of heat in a pepper). Use gloves and be careful not to rub your eyes before you thoroughly wash your hands. Cut the larger peppers into smaller pieces.

On an outdoor grill pre-heated to medium-high, toast all of the chilis, plus the coriander and cumin seeds in a large skillet. Stir occasionally. When the mixture becomes fragrant, heat for a minute or two more, then remove from the grill and set aside to cool. (You want to do this outside, as pepper fumes are a thing to be reckoned with. If you don’t have a grill, open your kitchen windows and set up a fan. But don’t stand downwind of the fan and the skillet!)

When the mixture has cooled thoroughly, place the chilis and whole seeds in a spice grinder or blender and pulse until the large pieces are broken up in much smaller pieces (about the size of flakes). Then add all of the remaining ingredients and grind until it reaches powder form.

107shares
Did you make this recipe? Take a photo, post it on social media and tag me, @soupaddict. I'd love to see how you made it your own!