Over the [carrot] top

Wild and crazy carrots (and this was in July, with yet another month's worth of growth left to go before harvest) (click photo to enlarge)

Sometimes, the oddest things just bug me. In the garden this year, it was the carrots. It was a great crop, no complaints there. But, it was an unruly crop. Carrot seeds are maddening to direct sow. I don’t know what it is — maybe they stick together more than other seeds and make careful plant separation and placement impossible. Once they sprouted, en mass, one practically on top of the next, it was clear I had completely dropped the ball in terms of clean carrot sowing.

Now, the average person would just shrug their shoulders, grab some sheers and do some thinning. Me, I have this irrational thing about not killing living plants. Can’t do it. No, sir. Even when there’s an obvious benefit. (I have a Ming Aralia going on 20 years old that grew so tall and unkempt it could no longer support its own weight under its wild branches — I had to anchor it upright from the ceiling under a skylight in the attic. Anyone else would’ve tossed the thing long ago, but I kept it, unable to part with it, until, in a fit of desperation, I severely and wincefully whacked the thing back, crossing my fingers and hoping for the best. Fortunately, it worked out, as the lone remaining trunk has sprouted new growth. But, I wouldn’t have had to resort to such drastic measures if I trimmed and trained it properly to begin with.)

Despite incompetent sowing, the carrots are lovely (upper left) (click photo to enlarge)

Anyway, the whole unruly carrot mess grew unchecked by me throughout the summer. Really, no harm was done, as even the crowded carrots came out of the ground looking very pert and pretty.

But, the sight of that wild, tangled crop of otherwise lovely, fern-y carrot tops, signifying my inadequacy in carrot management, still bugged me. So, for the fall crop, I decided to try something crazy.

Every gardening book I read warns, “Don’t transplant carrot seedlings. They don’t like it!” Makes sense. Carrots are root crops, and the plant physiology that is most disturbed by transplanting is the roots, so, critical disturbation is kind of built right in where carrots are concerned. Still, I had no reason to believe that my carrot seed sowing skills had suddenly taken a leap forward since the previous efforts.

In shuffling through my gardening supplies, looking for some seed packet or other, I uncovered a leftover package of 1-3/4" Jiffy Peat Strips that I had used to start my marigolds last winter. Hm. Seems like just the perfect size for the carrot transplants I hadn’t been able to erase from my mind, despite all advice to the contrary.

So, I grabbed my carrot seed packets (Purple Dragon and Sweet Treats), some starter soil, and planted 40 seeds, 2 per cell in 20 cells (10 cells of each carrot). The first thing I noticed was how much easier it was to control the environment of the Jiffy Strips vs. the environment in the garden. Yeah, obvious, but it made so much of a difference that the seeds were sprouting in a matter of days, not a week or more like usual. Plus, I have a slug problem in my yard, which took out more than one carrot seedling from the spring crop (although, alas, not enough to replace the thinning I should’ve done). I don’t, however, have a slug problem on my deck railing, where the trays spent all their time. Squirrels like to plant nuts in my begonia pots perched on said railing, but, they ignored the Jiffy Strips, and the carrot seedlings remained critter unfettered.

When roots starting poking out of the hole in the bottom of the cells, it was time to plant them in the ground. I was sort of dreading this part, but, it went really fast. I used a bulb planter to dig 20 holes, spacing them carefully. A delicious brew of compost tea and worm castings went into the holes. The Jiffy Strips were very pliable from consistent moisture levels, and the cells easily pulled apart without any mess. I peeled off the entire bottoms of the peat cells so the carrots will have plenty of comfy wiggle room to grow (without having to push through the peat wall, which sometimes doesn’t disintegrate as promised). 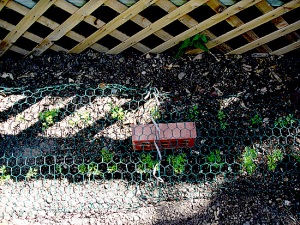 Not the best photo, but you can still pick out the green tops in the shady areas (click photo to enlarge)

Into the holes each cell went, tucked in with fresh loamy soil and another drink of tea. It took me about a 1/2 hour to plant everything, and I was being pokey, picking rocks out of the bed that had nothing to do with getting the carrots settled. The seedlings have really taken off — they’re very strong and upright with lots of leafing. Best of all, the airy spacing makes me happy, like I actually accomplished something good on behalf of these baby carrot plants. I’ll post again with notes and pictures of the harvest (good or bad). I’m excited about the implications for next year. If it works, I can start the carrots indoors, early, and by the time the soil is warm enough to support seedlings, they should (theoretically) be strong and ready to rumble.

Now for the real kicker: all this fuss, and I don’t really even use many carrots. I like growing them more than anything. Go figure.

Heirloom Tomatoes 2008
← Previous
How to Peel an Onion, How to Slice an Onion
Next →
0shares
Click here to cancel reply.

Oh my goodness! I'm so glad there's someone else who just can't thin seedlings! I can't do it either! I think I'll try this with my paper pots & just open their bottoms. Thanks so much for giving me hope for my carrots! I hate sowing them outdoors & thinning. It just seems cruel to decide that just because one plant is growing a little too close to another that it has to be ripped up. Always seems like such a waste.

Awesome! My 2nd round of Jiffy carrots are doing great so far. With the really mild Spring we're having here in Ohio, USA the ground is already workable, and the carrots should be ready to go in the ground in the next week or two. Here's to happy, healthy, spaced-out ( :) ) carrots!

I too had a problem last year in that I could not kill/thin healthy little carrots. Having read your Jiffy tip I hope to Steal your genius and grow the Best Carrots in Ireland!!!!!