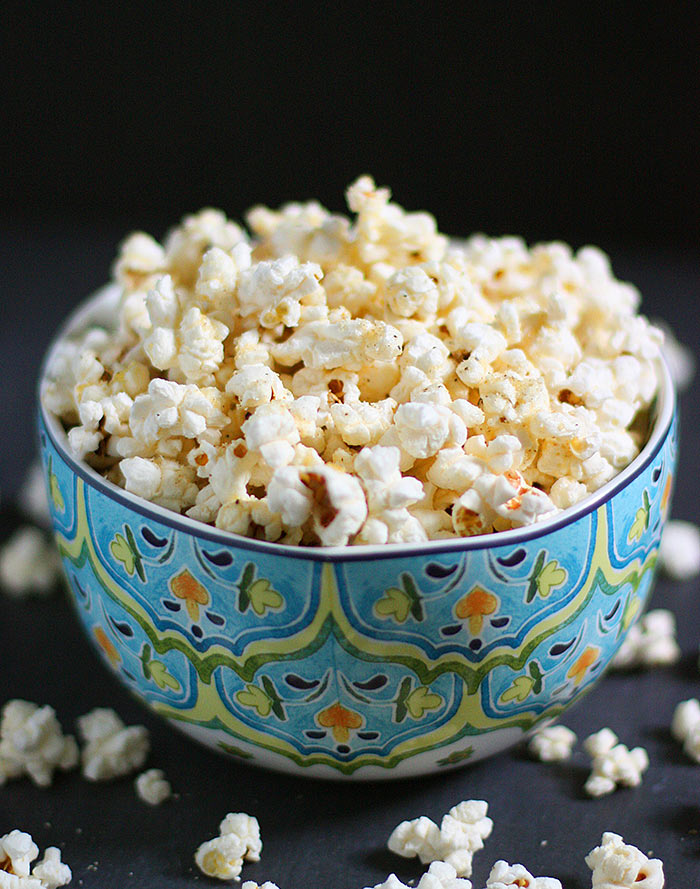 Popcorn has been part of the human diet for thousands of years, and it’s believed that the first use of wild, cultivated corn was, indeed, popcorn, not corn nibbled or scraped from the cob (those early varieties contained hard-shelled kernels that would crack your teeth if you tried to take a bite). There’s much evidence that the Aztecs chowed down on the crunchy goodness. Ancient cobs have been found preserved in caves in New Mexico. And they all enjoyed popcorn as it was meant to be prepared: simply, over a hot fire.

Of all the over-processed snack foods that evolved [or is it devolved?] from technological innovation, it’s popcorn that most easily returns to its healthy, home cooked roots: all you need is a pot with a lid, some oil, and five minutes. Seriously, it’s so easy. Top your popcorn with some insanely delicious seasonings — like fresh (fresh!) parmigiano reggiano and black pepper and other spices — and you have the best homemade popcorn you’ve ever tasted.

When I was a wee sprout, my mom made popcorn on the stove using a Jiffy Pop pan. Remember those? A round, silver aluminum pan with a wire handle and a foil cover pleated in a circle, sealing popcorn kernels and oil within. As the kernels heat up and pop, the pleated foil unfurls into a huge balloon. Rip open the top of the balloon and dig in.

Most of the enjoyment came from watching the bubble of foil grow and grow alarmingly large with the noisy popping inside reaching a firework’s crescendo. The popcorn itself was sometimes burnt, with lots of dead soldiers (unpopped kernels) left behind. Still, it was a good night when we spotted Mom taking the little gizmo out of the cabinet. 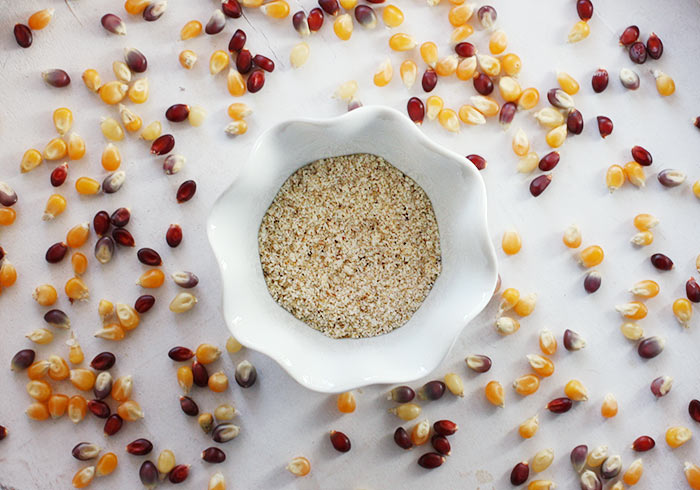 Some years later, Mom bought an air popper, and instead of waiting for the silver balloon to expand, we peered through the clear plastic dome and watching the kernels jump about in the heated cylinder before flying out the shoot, fully popped.

Looking back, it’s amazing how something so flawed in construct took over our popcorn-making consciousness. The artificial ingredients in those little folded rectangles give an unnatural flavor to the popcorn (not to mention popcorn lung to frequent eaters), and more often than not, the kernels sticking to the bottom of the bag end up burnt, despite one’s best efforts to grab the bag before the popping stops.

One company I worked for absolutely prohibited microwave popcorn. The ban was a personal crusade of the HR director herself, who loathed the smell of burnt popcorn. We were located in a repurposed, depression-era (and now officially historic) Coca Cola bottling plant with fascinating architecture and curious murals, and even though the cafeteria was in the basement, aromas had a way of permeating the entire building. My lasting memory of Kathy was witnessing a voice-raised, hands-on-hips (and overwrought) scolding she gave to a surprised, wide-eyed newbie, caught holding the bag, so to speak.

The smell of burnt popcorn is a force of nature. 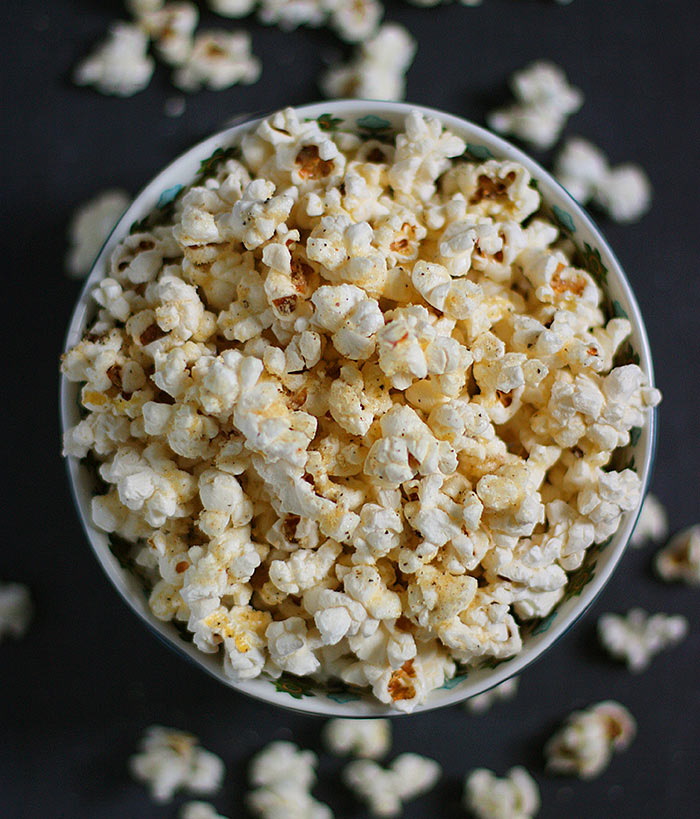 So, if there’s one thing I’d love to accomplish with this post, it would be to convince you popcorn lovers to try homemade popcorn the old fashioned way.

First, it’s economical. Popcorn kernels are inexpensive, and further, it’s worth scouring your local farmers’ market to learn if the corn growers also grow popcorn varieties. I discovered a fun little trick a few years ago from a local farmer: place a whole popcorn ear in a paper bag, fold the end over, and microwave it until popping slows. The kernels pop right on the cob in a big, bumpy mass — kids love it.

Second, you control what goes into homemade popcorn. No weird chemicals. In my case, it’s Parmageddon seasoning, all the way. The name is borrowed from a spice blend I spied at my favorite local spice shop, and the freshly grated parmigiano reggiano cheese, lots of black pepper, plus salt, and mustard, garlic, and onion powders make an over-the-top fragrant and savory blend that perfectly — and naturally — flavors the popcorn. It’s my favorite seasoning invention for homemade popcorn. 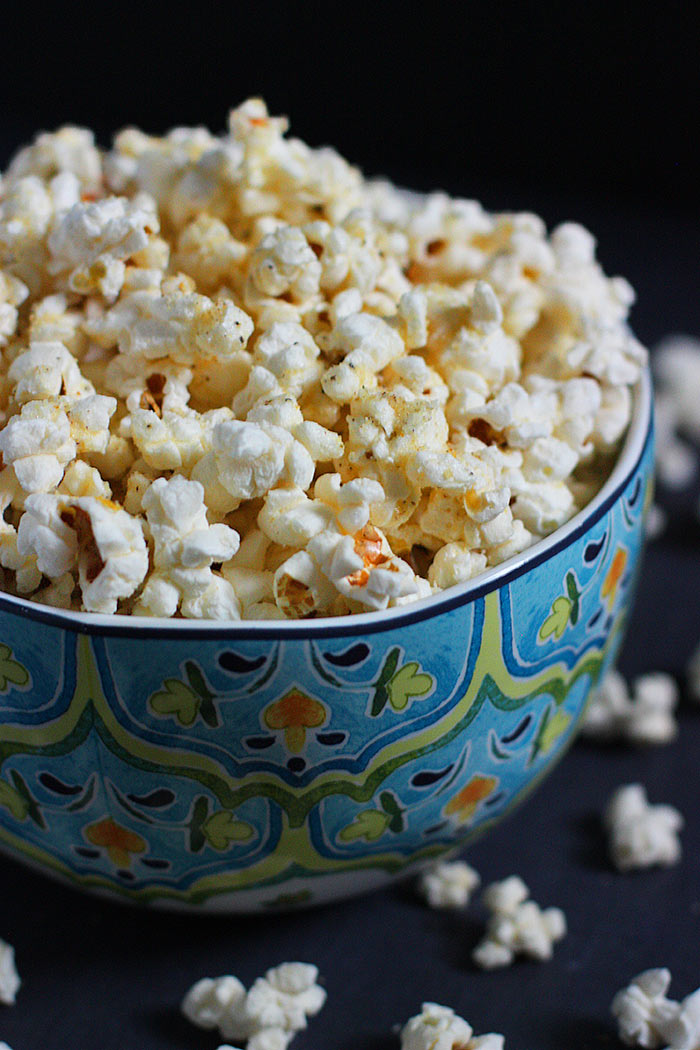 The process is so simple, I hope you’ll immediately toss those nasty microwave bags: heat the oil over medium in a roomy pot, add the kernels and cover with a lid. Give the pot an occasional shake until the popping starts. Remove from heat when the popping slows and dump your marvelous homemade popcorn into a bowl.

Drizzle with a quality melted butter if that’s your thing (and it’s definitely mine), sprinkle with Parmageddon seasoning, and fire up the Netflix. Winter binge-watching was never so good.

Vegan option:  Equally delicious dairy-free! Here's what you do: For the spice blend, replace the parmigiano with the same amount of nutritional yeast. Also, replace with the butter with a quality buttery spread, such Miyoko's Eurpean Style Cultured Vegan Butter. Delish!
Nutritional information, if shown, is provided as a courtesy only, and is not to be taken as medical information or advice. The nutritional values of your preparation of this recipe are impacted by several factors, including, but not limited to, the ingredient brands you use, any substitutions or measurement changes you make, and measuring accuracy.
498 shares
Click here to cancel reply.

Used your recipe to make a yummy at home date night snack. Only thing I did differently was I used refrigerated grated Parm, and probably more than the recipe called for. My hubby was impressed - this seasoning was so good!! I loved the addition of ground mustard. Thank you!

So glad you enjoyed it! And you can never have too much cheese! :D

Okay did this recipe times by 4 except used 1 tablespoon of avocado oil2 1/2 tablespoons of coconut oil 1/2 tablespoon of olive oil. Beautiful popped kernels seasoned to perfection added a little brown sugar and cinnamon. My family attacked it! They don't even really like popcorn! Thank you for a great recipe!

We LOVE coconut oil. Our popcorn (in an air popper) gets a good coating of melted coconut oil (I love those little melting trays on top of the popper), some sea salt and then a good dose of powdered chili and dill! I absolutely love the idea of your parmageddon seasoning... next movie night's menu for sure! Thanks again for the fun post!

I knew about corn, but had forgotten. Fun post and I love the bowl you put the popcorn in. I am a colorist! I am back into popcorn, because I can nibble it or pig out without guilt.

I love that popcorn can be a guilt-free mindless eating thing, which is so easy for me to do with potato chips (bad girl!) If I'm in one of those moods, I leave off the butter and have it!

I just happen to have a jar of cocoanut oil in my cupboard. Now to get the corn kernels and start popping. I understand the aversion to microwave, as the smell seems to linger in the house for days.

I hope you love it Phyllis - once I tried it, I no longer want my popcorn popped in anything but coconut oil!