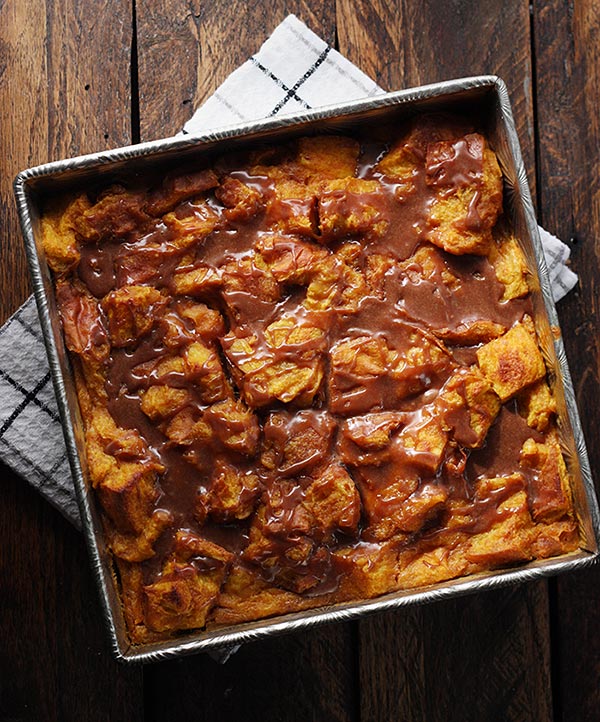 I’ve become a big fan of the bread puddings this season. I don’t know what took me so long.

Or actually, I do know: I thought I had a food aversion to anything called “pudding” that wasn’t, you know, jiggly in a bowl and chocolate flavored, preferrably topped with whipped cream.

It all started with Yorkshire Pudding. A youthful misunderstanding of exactly what it was burned a ridiculous thought into my brain: chocolate pudding served with meat. Which immediately sent me reeling into a meat-pie-similar defensive posture, ready to karate chop anyone coming at me with a forkful of pudding and meat (meat pies … another severe food aversion that persists to this day: Shepherd’s Pie [shivermetimbers]). 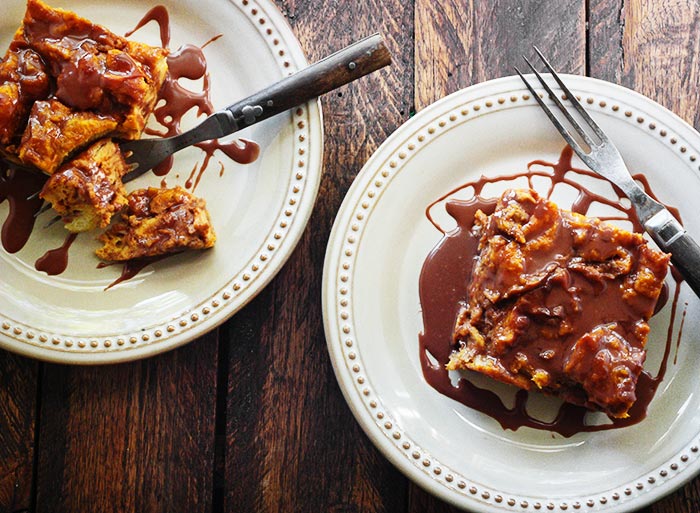 Happily, I’ve resolved my various pudding issues [although meat pies of any kind are still firmly boycotted, thank you very much] and have enjoyed the custardy bread pudding goodness on a number of occasions (including this recipe for baked French Toast, which, I came to realize while working through my Yorkshire Pudding misinformation, is actually just cinnamon-spiced bread pudding with booze.)

Bread pudding anything is so easy to pull together that it should definitely be a part of every baker’s repertoire. Whisk up some eggs and cream, add some flavorings, pour over bread cubes. Bake. Done. 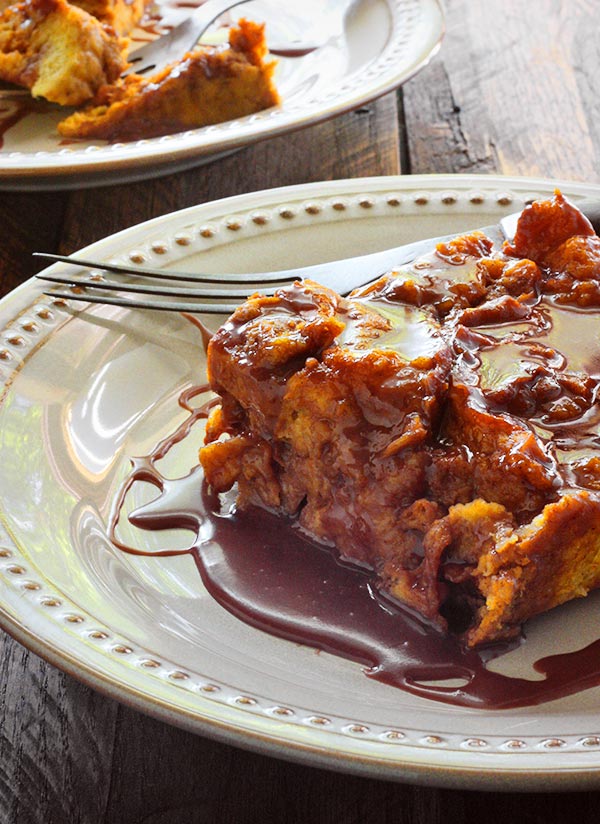 So, when autumn rolled around, pumpkin bread pudding made my must-make list right away. I had visions of a tender, custardy pumpkin crumb flavored deeply with pumpkin pie spices, and a decadent chocolate drizzle.

Which immediately switched over to a decadent Nutella drizzle when I spied the jar in my cabinet.

Recently on Facebook, I saw an informal poll in my news stream: what food do you absolutely refuse to eat? There was a lot of the expected “mayonnaise” and “mushrooms” (both texture problem children. I can relate: I can’t stand the texture of shredded coconut. Unlike meat pies, it’s not the flavor — it’s the dry, papery, slivery chew — like thick hairs in your mouth. (Gah! My tummy flippity-flops just thinking about it.)).

I was deeply disappointed that no one in the poll listed “meat pies” (and so few listed shredded coconut) but I was not expecting to see “Nutella.” And I was floored to see Nutella paired so frequently with the word “loathe.” (The tone of some of the replies was almost confessional, as if folks were relieved to finally admit their Nutella hang-ups in the presence of like-minded people.)

Loathe. That’s some deep-seated disliking of Nutella right there. 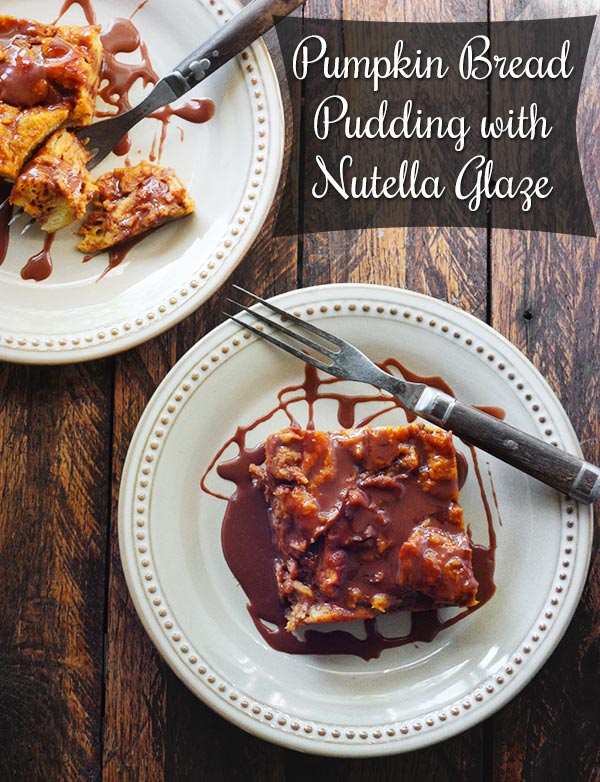 I don’t have issues with Nutella (obvs), but if you do, first take comfort that you’re not alone, and second, use a chocolate drizzle instead (or, if it’s Nutella in particular, but not hazelnut flavor in general, melt some Gianduja in a bit of heavy cream, and thicken it with confectioners’ sugar until it reaches the drizzling stage).

Either way, I really recommend some kind of chocolate-y drizzle on the pumpkin bread pudding. It’s the cat’s meow.

for the bread pudding

Nutritional information, if shown, is provided as a courtesy only, and is not to be taken as medical information or advice. The nutritional values of your preparation of this recipe are impacted by several factors, including, but not limited to, the ingredient brands you use, any substitutions or measurement changes you make, and measuring accuracy.
722 shares
Click here to cancel reply.

Great to have all of these recipes in one place. it is a fabulous squash, especially on a weeknight, somehow, when time is of the essence. thank you for sharing

This recipe sounds great! I've seen Michael Symon's recipe before, and thought it sounded delicious. One question - he uses a stick of butter in his (something I hadn't seen before in bread pudding recipes), and I noticed that was something you omitted. Do you think it needed any butter? Did you try it his way before settling on making the recipe without it? Thanks!

I'm sorry I didn't let you know I shared this recipe sooner -- I had computer issues for a few weeks, and I'm just getting back to normal. The speculoos spread is not as readily available as Nutella, but the results are awesome!

Karen, I have one food aversion--the "cheese" sauce that comes in a shiny silver bag and sits in the concession stand, ready to be poured over nachos or chili cheese dogs or marching tacos (concession stand is run by Band Parents, we don't do walking tacos). That stuff is just unnatural, and keeps forever.

But the pumpkin bread pudding? Looks very yummy, and I'd love to eat it!

I don't know how cheese got to be so suspect in some cases (and so amazing at the opposite end), but it sure has its issues. I worked at an Orange Julius in high school, and they served the nastiest nacho cheese. It was the bane of the dishwasher who had to scrape the gloopy, burned on slop from the double broiler bucket. I can still see it when I close my eyes....

I have no food aversions. none, nada, nothing...and it is unfortunate for my waistline I'm afraid. Can't wait to try this! Nutella is one of my food "obsessions" of which I have many....

Sadly, my food aversions don't deter me one little bit. A woman can live a marvelous culinary life without meat pies and shredded coconut. ;)