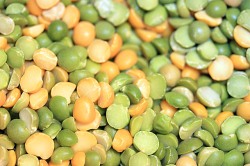 For someone with a blog named “SoupAddict”, I sure haven’t been talking about soup much lately, have I? The reasons are lame, I assure you. It’s definitely not that I haven’t been making soup, because I have. (Are you kidding? I eat soup every week [sometimes every day] year ’round. How can you not? I mean, it’s soup. I feel about soup the way some feel about chocolate. Of course, I feel that way about chocolate, too, so, all my bases are covered.)

No, I think it’s that, blogwise, I have to hold myself back from waxing too philosophical about soup and its relationship to things that grow. See, I’m also a passionate vegetable gardener, so, the vegetables in my soups aren’t just the result of a simple trip to the grocery store’s produce aisle, each picked as almost an afterthought in the scheme of the entire shopping list. No, they represent months and months and months of planning and hovering and fretting and digging and kneeling and plucking and watering and sunburning.

It’s very difficult for me to look at the first two pictures below and simply skim right over them without commenting on their history. The leeks, the carrots, the rosemary all came out of my garden the day I made the soup (December 20). I realize I’m alone in being amazed at that. I realize you are rolling your eyes this very second and scrambling for the scrollbar to find the point of this post (which, believe it or not, is the split pea soup).

That’s why I don’t post about soup so often. It’s where my tendency to ramble runs wild. But, now that I’m here, I’ll take the chance that you’ve followed me this far and are ready for the goods.

Split pea soup is one of those dependably plucky soups that can be tossed into a crock pot and slow-cooked all day, or tweaked and picked at to suit your cravings du jour. While this version is not vegetarian, you can easily make it so by eliminating the prosciutto and replacing the chicken stock with vegetable. (Oh, speaking of vegetables … ha ha, just kidding. Had you reaching for the scrollbar again, didn’t I?)

Melt butter in a dutch oven or stock pot over medium heat. Add prosciutto and cook until meat begins to let off some of its fat. Stir in onion, leek, carrot, and garlic; cook until the vegetables are soft, about 8 minutes.

Add chicken broth. Stir in split peas, bay leaves, and rosemary. Bring to a boil. Reduce heat to low; cover, and simmer until peas are cooked and “mushy,” about 1 hour, stirring occasionally.