Of all the soups in the world, French Onion soup is the one brilliant invention that SoupAddict would totally lie and take credit for, if it were possible to connect all the dots back to SoupAddict’s kitchen.

But it’s just not possible.

Hmm, what would I have to do to make French Onion Soup mine, all mine?

Let’s see, one two three four … okay! I think I can get all of this done while watching the National Dog Show on Thanksgiving Day.

By Black Friday, French Onion Soup will belong to SoupAddict, and will hereafter, throughout the world, be known as SoupAddict’s Onion Soup.

Sorry, France. This is what happens when you don’t stay on top of these ownership things.

So what is it about French Onion Soup that sends SoupAddict completely off her rocker?

It’s the onions. Caramelized onions. Rich, tangy sweet onions cooked in a rich, savory broth for longer than your will power can stand.

SoupAddict once had a friend who was allergic to onions and therefore could not eat them under any circumstances. This was a friendship doomed to failure. SoupAddict eventually unfriended her.

But you already figured that out, right? And you’re cool with caramelized onions, okay? Because SoupAddict would be very upset if you’re not.

Two to three medium onions is the minimum; three large, even better.

Now, there’s no crying in cooking, so, if you have trouble slicing onions without getting all teary-eyed, take a read through SoupAddict’s onion slicing primer.

You’ll want to slice the onions into half moons, and halve the half moons (if you’re using SoupAddict’s slicing technique, make one vertical cut down the middle of each half of the onion (up to but not through the root end) before slicing. This will produce the quarter moons.

You can do half moons if you want. Your house, your rules. SoupAddict finds the onion strands stay on the spoon better when quartered.

Rehydrate the mushrooms for about a half an hour in one cup of boiling water with a glug of sherry.

And then add a glug of sherry to the soaking mushrooms, too.

[Ba-dum-bump-chiiiiing!] I’ll be here all week, folks! Tip your waitresses!

SoupAddict uses 2 cups of chicken stock, one cup of beef stock and one cup of mushroom stock, producing a deep, earthy flavor that makes you just want to wrap yourself around your soup mug.

SoupAddict was very busy this year in September, canning, freezing … and making lots of homemade stock.

Fun SoupAddict fact: SoupAddict crosses her z’s, because she has a degree in math, and math students are forced to cross their z’s so their professors can tell them apart from 2’s. After four years of crossing z’s, the habit stuck. 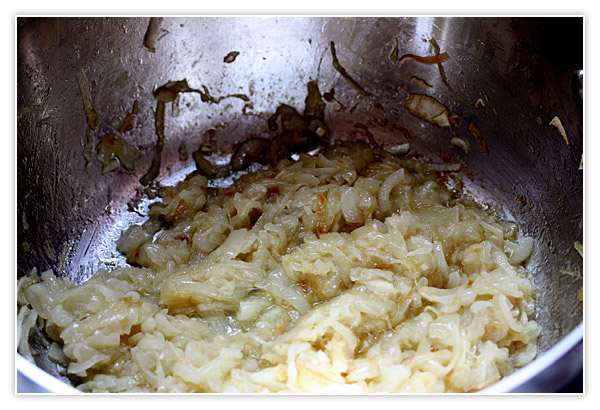 Here are the onions about halfway through the total cooking time. They’re starting to caramelize here and there, taking on a lovely golden hue. 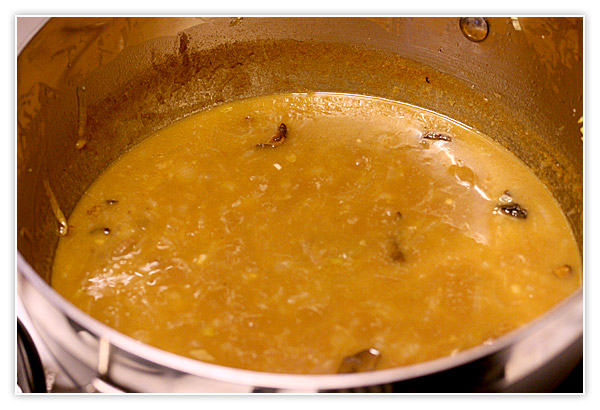 It’s not exactly traditional, but SoupAddict tosses the mushrooms from the stock-making efforts into the soup, too. SoupAddict loves mushrooms. And bacon.

But there’s no bacon in this soup. She’s just sayin’.

Now for the topping. The cheesy topping. Take a few slices of bread and cut them into smaller pieces. You can do croutons if want, but you don’t have to go that small. Layer the bread on the soup surface. Cover with grated cheese.

Broil until the cheese is bubbly and melty and irresistable.

Now you can cry. With happiness.

Prep and cooking time: about 2 1/2 hours

2-3 medium to large onions
1 tablespoon olive oil
1 tablespoon butter
2 cloves of garlic, minced
4 cups stock (any kind, or a combo of your favorites. SoupAddict uses a combo of chicken, mushroom and beef, but you can use whatever flavor you prefer.)
1 tablespoon all-purpose flour
1/2 cup white wine
Salt and pepper to taste
4 teaspoons Brandy or Cognac
4 slices hearty bread (a French or Italian loaf is particularly nice), cut into smaller pieces
1 1/2 cups Gruyere or Comte cheese, grated

Slice the onions into half moons, or halved half moons. Meanwhile, heat the olive oil and butter in a large stock pot over medium heat (do not use a non-stick pot).

Add the onions and garlic and cook for several minutes, stirring frequently, until the garlic softens, then turn down the heat to medium-low.

The onions will need to cook a long time, about an hour and a half, to properly caramelize. At the end of cooking they should be a deep golden brown, but not burned. Don’t try to rush it by turning up the heat. Stir the onions frequently, scraping up any browned bits that form on the bottom of the pan along the way. Use a bit of the wine to help with the deglazing, if you’d like.

When the onions are finished, push them aside to clear a space, and add the flour and two tablespoons of the stock to the cleared space. Stir well to make a paste, add the wine, and incorporate into the onions. Add the remaining stock and combine well. Taste, and add salt and pepper as necessary.

Increase the heat and bring the soup to a boil, then reduce heat to simmer. Partially cover the stock pot with a lid or foil, and allow to simmer for 20 minutes. Taste again, and add salt and pepper as necessary.

Adjust one oven rack to the upper 1/3rd position in the oven and set the broiler to High. To each of 4 oven-proof soup bowls, add one teaspoon of Brandy. Ladle the soup into the bowls. Place the bread pieces in a single layer over the surface of the soup. Layer the cheese thickly over the bread.

Set the bowls on a baking sheet and place in oven. Broil until the cheese is well-melted and bubbly, starting to brown.

Serve piping hot. (Be careful! The bowls will be piping hot, too! If safety is a concern, nest each bowl in a towel when serving.)

[...] Week 27 of 52: French Onion Soup Posted in 52-Week Challenge 2011 by baonkobento on July 12, 2011 Tags: cooking trials, postaweek2011, soup Oh yes, you read that right. I have finally achieved the craving I’ve been having for the longest time: French Onion Soup! I think I started craving for it around February or March, and I have been looking for restaurants that serve it but it has all been in vain. I didn’t really dare try it at home because of the length of time the onions will spend sweating and cooking, and that’d produce a lot of smoke. Finally today, I was able to try it at my mom’s place (which has better ventilation). The recipe comes from one of the funniest food bloggers I follow, SoupAddict. [...]

Thanks alot mate, this is a really nice French Onion Soup recipe :) I’m bookmarking this page!!

Oh my! Look at that perfect cheesy crust! French onion is by far my favorite soup!

Your pictures are making me cry with happiness. And sadness because I can't have your French Onion Soup. I also cross my z's, and I think anything less than 3 LARGE onions in this soup is just sinful. =)