How to clean leeks

Much to my surprise and chagrin, Fall is fast approaching. I love Fall — everyone loves Fall: if you were to take a poll, each pollee’s face would scrunch with happiness, and they would hold their arms tight like they were wrapped in a fuzzy blanket, while using words like “football” and “pumpkins” and “jeans-and-hoodies” — but … I’m not finished with summer yet. Where did August go? Where did June go? My gardens are still busting out, and I’m sooo not done with tomato salads.

Fall is fast approaching anyway, rudely shoving beloved Summer out of the way. And bringing with it winter vegetables. And soup. Hm. Well, now, that’s news I can bear. Soup. Mmmm. (Have you heard, I’m addicted to soup?)

One of my favorite ingredients is the lovely leek. A member of the onion family, leeks lend a sweet, delicious pungency to many types of soups, including the ubiquitous potato and leek.

Their unique physiology, however, requires special cleaning considerations. Like onions, leeks are layered, with each layer representing a leaf that grows above ground to nourish that layer within the bulb. Unlike onions, though, the leek is not wrapped in a solid outer layer that turns into a protective papery skin after curing and keeps out dirt and debris.

Dirt can easily seep down along the length of the beautiful tall leaves (or “flags”), directly into the bulbs. And pretty much guaranteeing that this will happen is the fact that farmers (and home gardeners like myself) mound up dirt around the stalk to help blanch and lengthen the bulbs during growth.

It’s not uncommon at all to slice a leek and find mud seeping out between the layers. It’s also nothing to be alarmed about, but you do need to clean the mud away before you use the leeks. 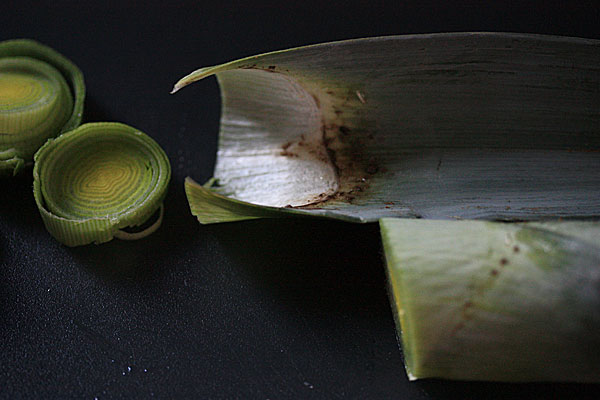 This leek was not terribly dirty at all — just a few smudges here and there — but let’s take no chances and give it a thorough cleaning anyway. 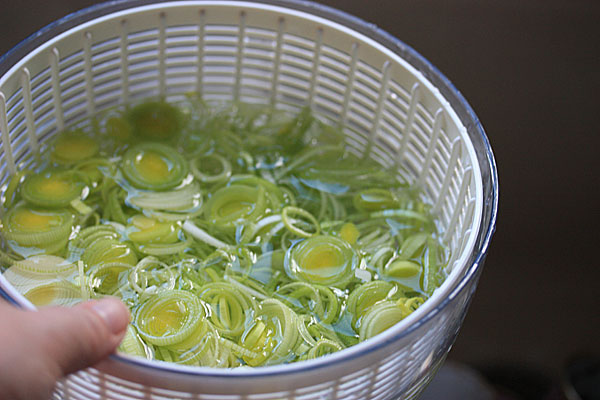 Break out your handy-dandy mini salad spinner and get to work. Slice the leeks (do not dice) and place them in the basket. Give them an initial rinse under the faucet. Fill the bowl with cool water and submerge the basket into it. Let sit for a minute or two.

Feel free to swish the leeks while you’re standing there. It’ll help loosen the dirt and make you feel as though you’re accomplishing something other than just standing there.

Lift the basket from the bowl and rinse the leeks briefly under the faucet. Dump the water from the bowl, refill with clean water, and submerge the basket again. Repeat a few times, until the leeks are squeaky clean.

After the final soaking, give the leeks a whirl in the spinner to remove the excess liquid. If you need to dice the leeks for your recipe, now’s the time to do it. They’re ready to go!