3 Turmeric Drinks to Try This Year

You are here: Drinks » 3 Turmeric Drinks to Try This Year

Three turmeric drinks that are healthy, delicious, and will give you great reasons to use more of this super spice. 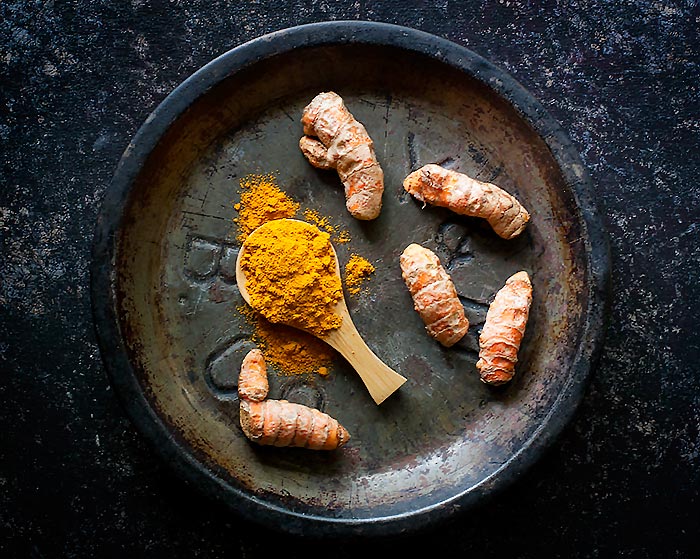 I’m a turmeric convert. I say that with loads of caution, however, because I came from the era of the whole “fat is evil” disaster, where low-fat (but sugar- and additive-filled) eats became all the rage. So I’m cautious, but optimistic, too, that that this wormy-looking, crazy-staining orange tuber has all the right stuff.

Rather than me blathering on about the promises of turmeric, check out this site, which does a good job of describing turmeric’s good works (think big-time anti-inflammatory with possible cancer fighting agents). Do your research, too. I did, and found a benefit not mentioned in the article above that has helped me tremendously (I won’t go into the deets since this is just a humble food blog, but, ladies, if your monthlies are monstrous, do investigate turmeric.)

If you’ve never seen fresh turmeric (the tubey things above), it’s an odd discovery. Short and ridged with a bright orange interior, they grow underground, like ginger root. When grated, dried, and pulverized to a powder, you get the sunshine-colored powder that tints everything it touches.

Unless you’re a seriously devoted fan of prepared yellow mustard (which gets its neon yellow color from turmeric), the American diet doesn’t really use turmeric. Not like, say, Indian curries, which are chock full of the good stuff. So, we have to stretch to find ways to get turmeric into our diet.

In the summer, though, I just don’t turn on the stove all that often, and while I love curries, they seem too heavy and warming when the outside thermometer tops 90°. So, I’ve turned to beverages: specifically, turmeric drinks. 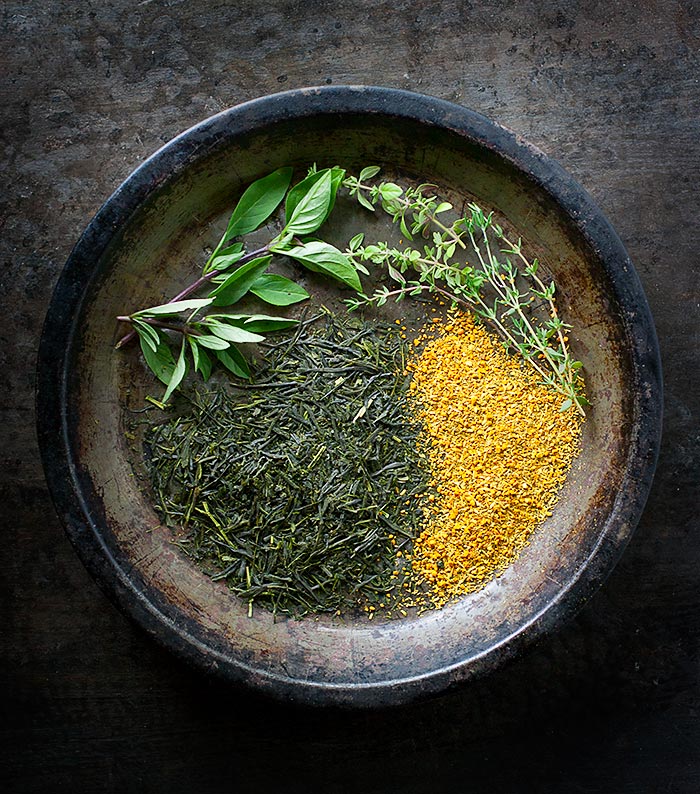 Although round, earthy, and slightly peppery, turmeric makes for a surprisingly companionable additive to liquid refreshments. Iced tea — as you’ll notice here by the sheer number of photos — is my favorite.

Along with the turmeric, I’ve begun cold-brewing my green tea, which has been a happy, eye-opening revelation. Although I love iced tea, I’m not a big fan of the tannins therein (and therefore, most definitely not a fan of tannin-saturated wine). Tannins add that bitterish snap that folks love in their beverages, but they also dry out the tongue, which, to me, is an unappealing sensation. 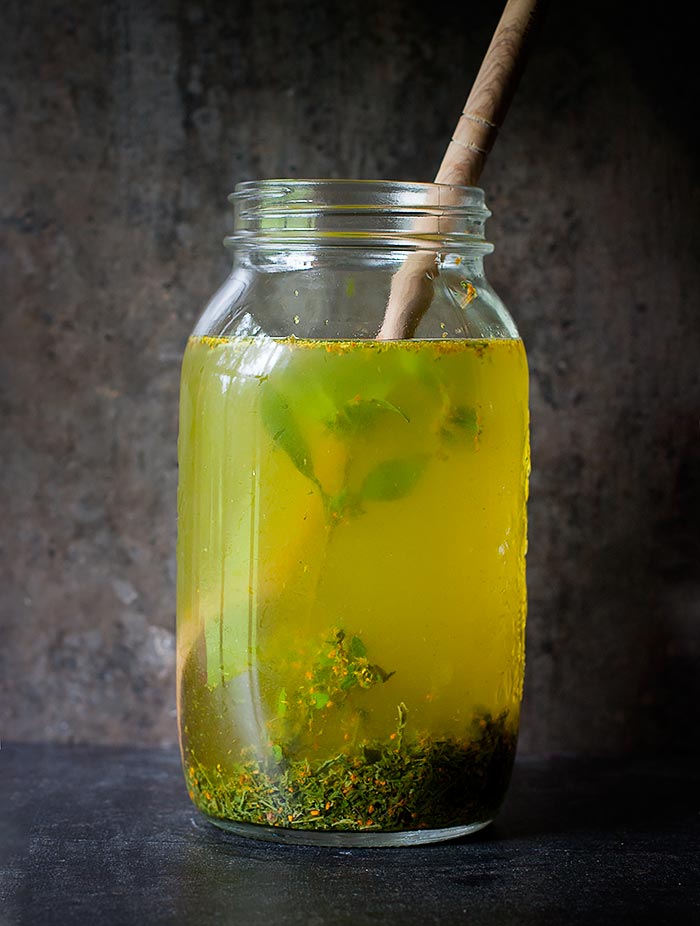 Tannins develop in tea when the leaves are heated in boiling water. Along with tannins, this heating process essentially “cooks” the tea leaves. Cold-brewing avoids that altogether, yet still extracts the flavor and compounds from the tea leaves.

My first sip of cold-brewed green tea was a joy – no bitterness, completely thirst quenching, and full-flavored as though the tea had been steeped in steamy water, although with a fresher edge. 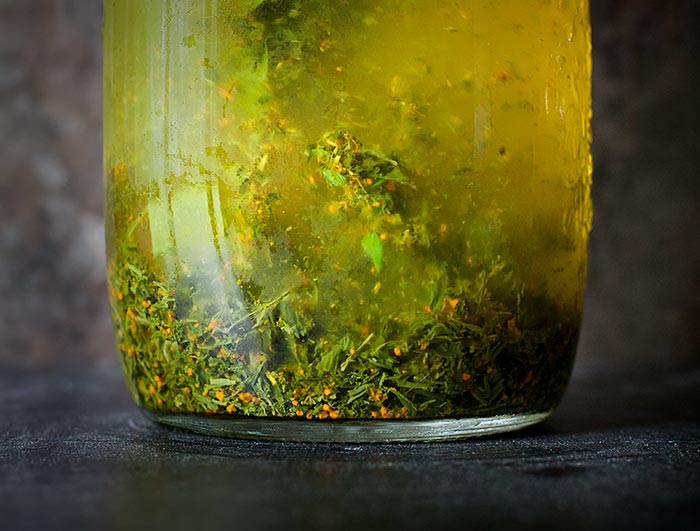 I use a hybrid method between boiling and pure cold-brew: I give the tea leaves a very quick zap of near-boiling water in a small sauce pan, followed by a plunge into cold water. The effect is to awaken the leaves and begin the extraction process, but stops it short before cooking occurs. Then a nice long cold bath in the fridge brings the tea to smooth perfection. If you’re a green iced tea fan, I highly recommend giving it a try. 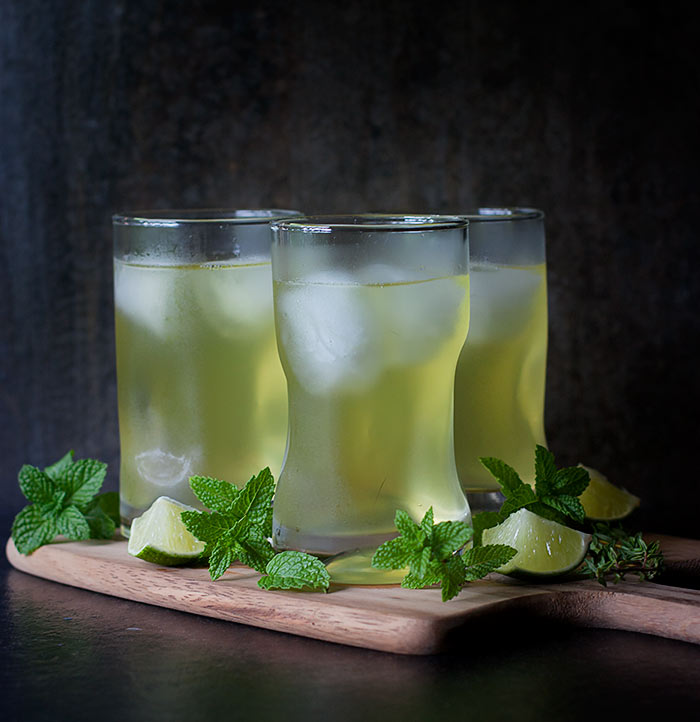 As for turmeric in tea, I use a turmeric tea blend from the brand, Numi. Although I prefer to use loose sencha and green gunpowder tea leaves, the turmeric blend I buy comes in bags. I simply slit open the bags and dump the contents into the pot along with the loose tea. If you’d prefer, you can also add straight turmeric powder or finely grated turmeric root to the pot, along with a big pinch of freshly ground black pepper. Turmeric’s benefits are jumped-started by heating, and studies have shown that black pepper increases the bioavailability of the active compound in turmeric, curcumin. Which is a science-fancy way of saying that black pepper helps the body absorb the curcumin. 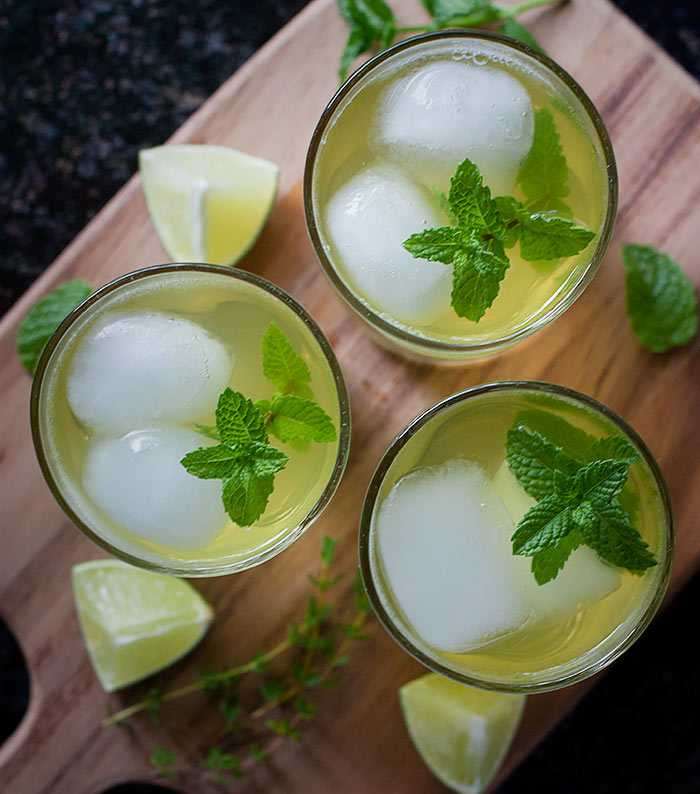 Finally, strain the tea through a fine sieve to remove the leaves and residues. Serve over ice, and enjoy the refreshing goodness. (I’m sipping the batch above as I type. Delish.) (Jump to Cold-brewed Tea recipe.) 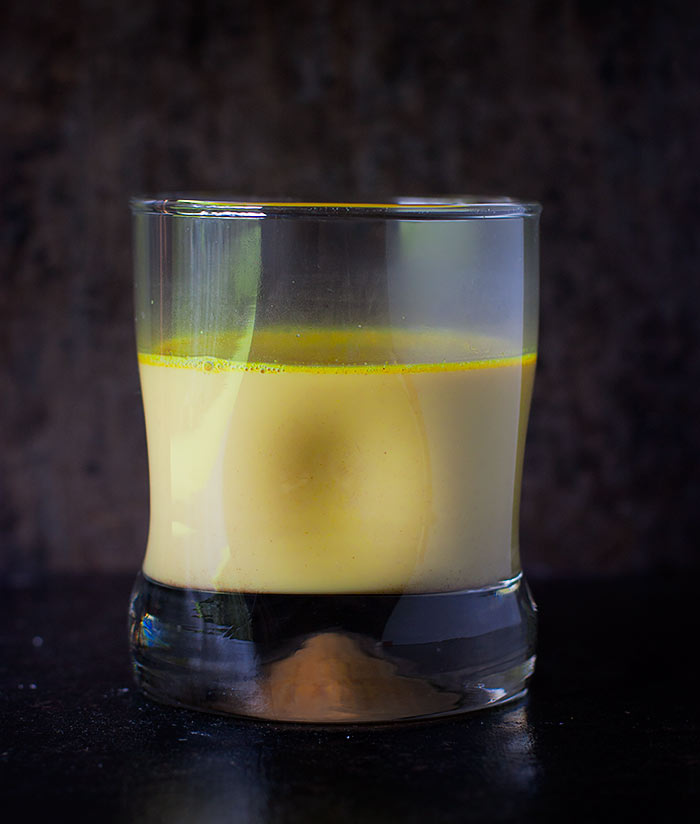 I stumbled upon this drink over the winter, when chilly temps meant lots of warming beverages and blanket-draped shoulders. My version is a cinnamon-ginger-heavy brew that I enjoy either hot or cold, even poured into red rooibos iced tea, as a sort of variation on chai. (And honestly, I think the milk would be delicious made with chai spices.) The cinnamon is not just for great flavor, but also for its own considerable health benefits.

The star, of course, is turmeric, which tints the milk a lovely golden color. I make a paste of the spices and store in the fridge for quick preparation, and use a coconut/almond blend milk instead of dairy. It’s a lovely, mild drink that’s perfect for breakfast (and, indeed, I’ve cooked oatmeal in this recipe, months back when a steaming bowl of golden oatmeal was the only way to start a cold winter’s morning). (Jump to Golden Milk recipe.) 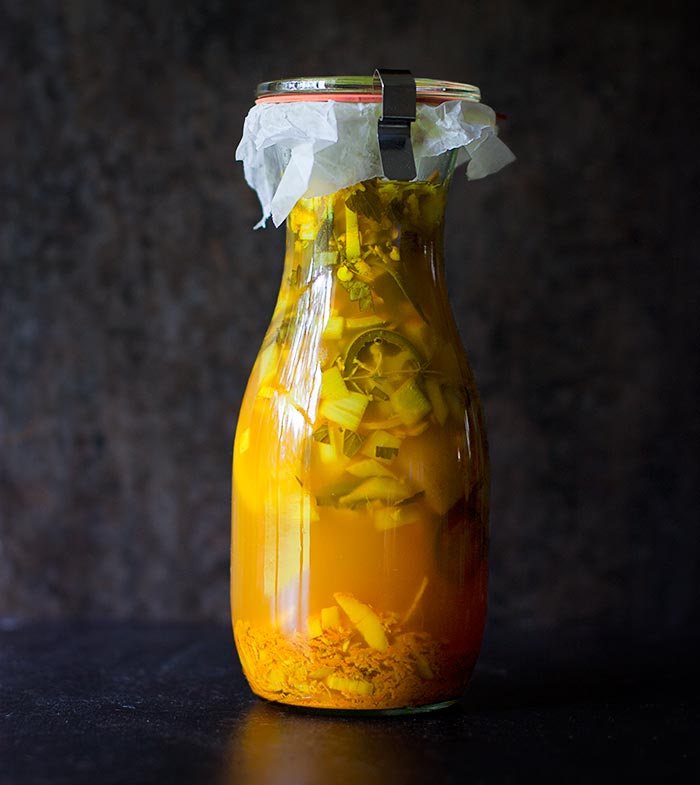 Finally, I’d like to introduce you to a most interesting tonic that’s helped me through a number of weird stuff, particularly bronchial and sinus related. Fire cider is not new, and has been around long enough [decades – as in, grandma-made-this decades] that it’s seeped into our subconsciousness, until some dudes thought, “Hmm, I wonder if anyone’s thought to grab the name, fire cider” and then successfully trademarked that term for their young business, sending the herbalist community into an uproar, who could no longer call grandma’s fire cider, Fire Cider, at the small markets where they sold it.

Anyway, this concoction contains a stunning array of health-promoting ingredients, including onions, garlic, lemons, hot peppers, ginger, horseradish, herbs of all sorts, and, of course, turmeric. Topped off with raw apple cider vinegar (tamed later with agave or honey, if you want), it packs one heck of a powerful punch.

And to gild the lily, the mixture is fermented for several weeks, extracting every bit of goodness from its ingredients.

Many of you are probably cringing right now —— all those super strong tasting and smelling ingredients, topped with ultra puckery apple cider vinegar? “Will anyone ever love me again if I drink this??”

I understand. And no worries, they will: it’s not like chewing on a raw garlic clove. You strain the solids before consuming, and the dose is only 1 to 2 tablespoons (which you can mix with agave or honey). 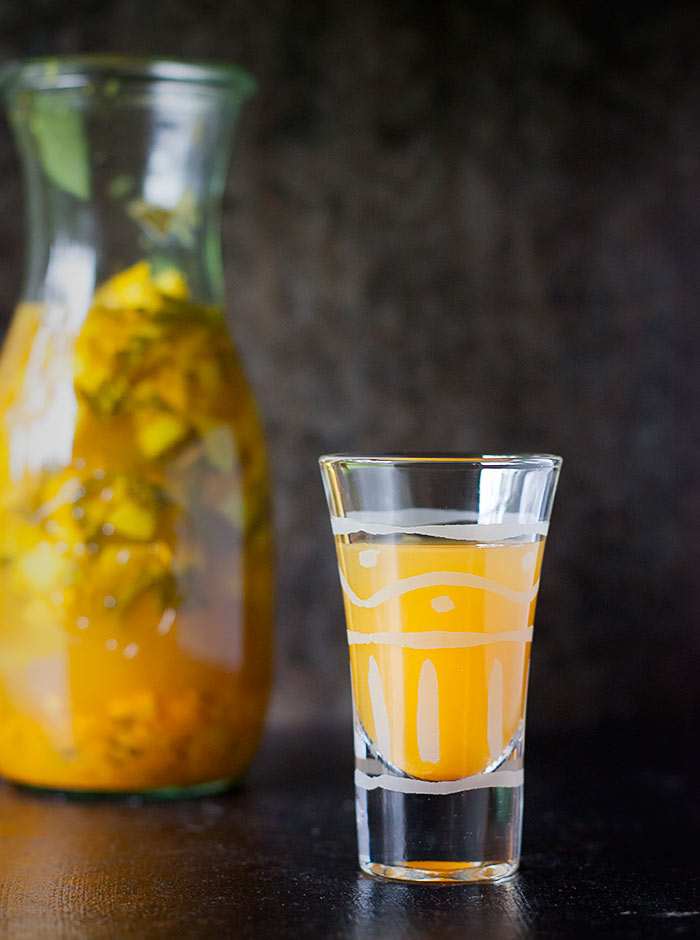 It’s definitely not a vanilla shake, but if you like spicy foods and vinaigrette dressings, you’ll get through it with flying colors, I promise. In fact, it smells awesome, and it’s very much like downing a spicy salad dressing.

I became a fan of ACV some years ago, when some minor problems with gallstones cropped up. After a daylong flare-up that left me in constant, fidgety discomfort, I caved and turned to the googs, expecting to be told that it’s cancer with, you know, 20 minutes to live.

Instead, I found the mostly unlikely remedy: site after site of folks swearing by a swig of ACV. It sounded highly improbable, but harmless and, frankly, I had nothing to lose. Forty minutes later, I was resting comfortably and drifting off to sleep. I have no idea why it works, but it did (and has again several times since).

So, anyway, what’s the fire cider for? I get twice-yearly colds/sinus infections — once in winter and once in the summer. The winter affliction is the sneezy, drippy, sore throat, cough, chest congestion of the typical cold that you just have to ride out. The summer variety, however, starts off cold-like, but then quickly transitions into sinus hell, with symptoms I wouldn’t dare describe on a food blog, and often slides into full-on infection territory, complete with fever.

I’m not organized enough to drink fire cider every normal day, but some folks swear by the stuff for general health purposes. (Jump to Fire Cider recipe.)

Alas. Before I release you from the grip of this impossibly long post :), I do want to remind everyone that nothing in this post is meant to serve as medical or personal health advice.

As I said at the outset, I approach these things with an abundance of caution, lots of research, and careful observation of results and effects on my person. And, of course, everything in moderation. I don’t consume mad quantities of turmeric, and you shouldn’t either (without consulting your trusted medical or nutritional professional).

I always have the low-fat fiasco firmly in mind.

Hello, the drinks look good. I would like to try a few. I have a question about 'Paste' in one of the recipes. What is that? did I read it wrong or miss the instruction? Thank you

Hi Amanda, if you're referring to the Golden Milk recipe, the paste is the first part of that recipe. It's the mixture of spices. Hope you like it!

Huh. You have given me much to think about and I am delighted the result of your search wasn't 20 minutes to live. I must check out turmeric because all three of these recipes would be really useful around here. Thanks!