Serve this loaded Skyline Chili Dip at your next party, and I guarantee no one will go home hungry. (Although they might never want to leave!) 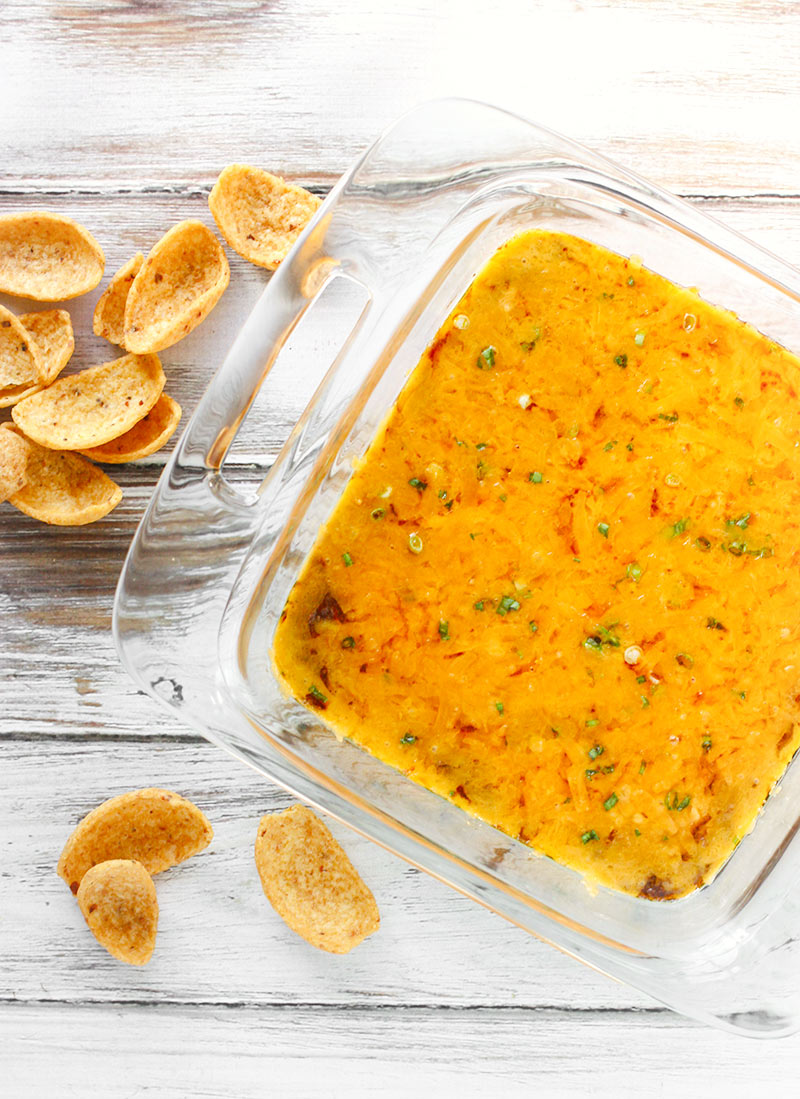 I don’t often post super-indulgy recipes, but food events like the Super Bowl mean exceptions have to be made, right? So let the indulgy dip recipes commence!

But first, I want to back up here a sec and talk about Cincinnati chili. It gets a strangely bad rap from other parts of the country — mostly, I think, because peeps can’t wrap their heads around eating a bowlful of thin, almost runny chili.

Here’s the deal: we Cincinnatians don’t actually eat our chili by the bowl. Seriously. I have a lot of Cincinnati chili fans in my life, and no one just ladles it into a bowl and goes at it with a spoon, the way you would with, say, Texas chili. 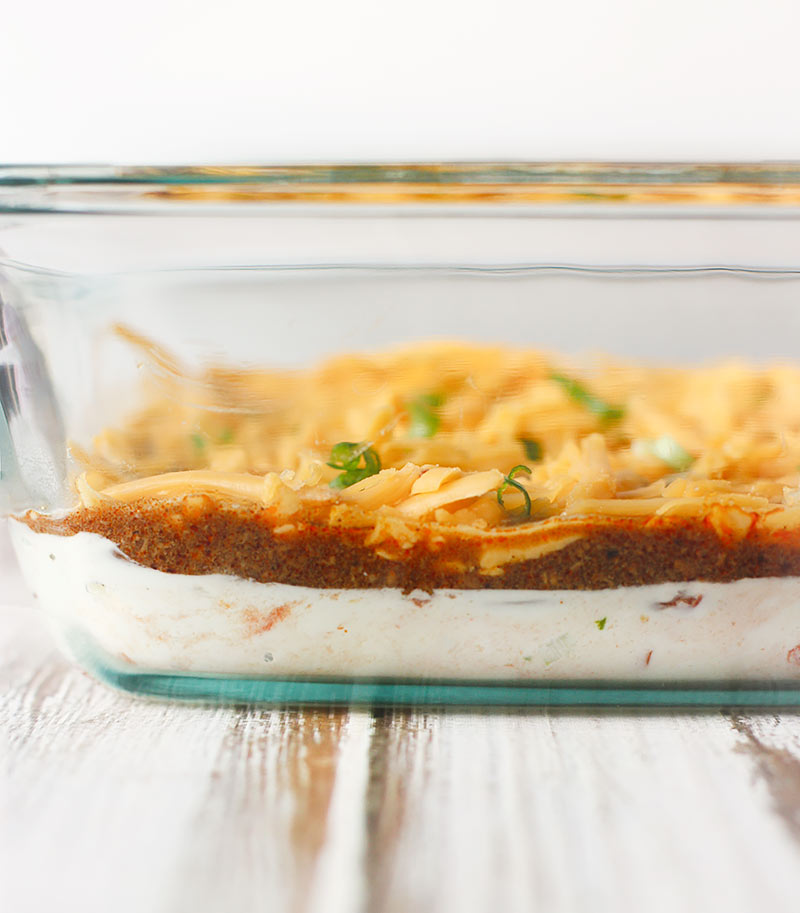 What is the “Skyline” in Skyline Chili Dip?

Skyline is the name of a restaurant (Skyline Chili, to be exact) that serves Cincinnati style chili. They’re probably the most famous, but are just one of an entire industry of Cincinnati chili restaurants, including Gold Star Chili, Empress, Dixie Chili, and Camp Washington. Although everyone’s chili have the same fundamental base — a Mediterranean spice palette seasoning a thin meat sauce, along with cinnamon and sometimes even chocolate — there are tweaks in flavor and texture that make each a unique chili experience.

You’re not a true Cincinnatian until you’ve sample the chilis from all of them. If you’re ever visiting Cincinnati and want to start a lively debate, just ask the natives who makes the best Cincinnati chili … and step back. 😀 (Learn more about the history of Cincinnati chili.)

So, now that you understand and can embrace the awesomeness of Cincinnati chili, let’s talk today’s dip. There are a lot of postings about Skyline chili dip on the interwebs, and they’re all basically the same thing: cream cheese, Cincinnati chili, cheddar cheese, with or without onions. My local Kroger even makes this stuff in-house and sells it in the deli, packaged and ready to microwave. 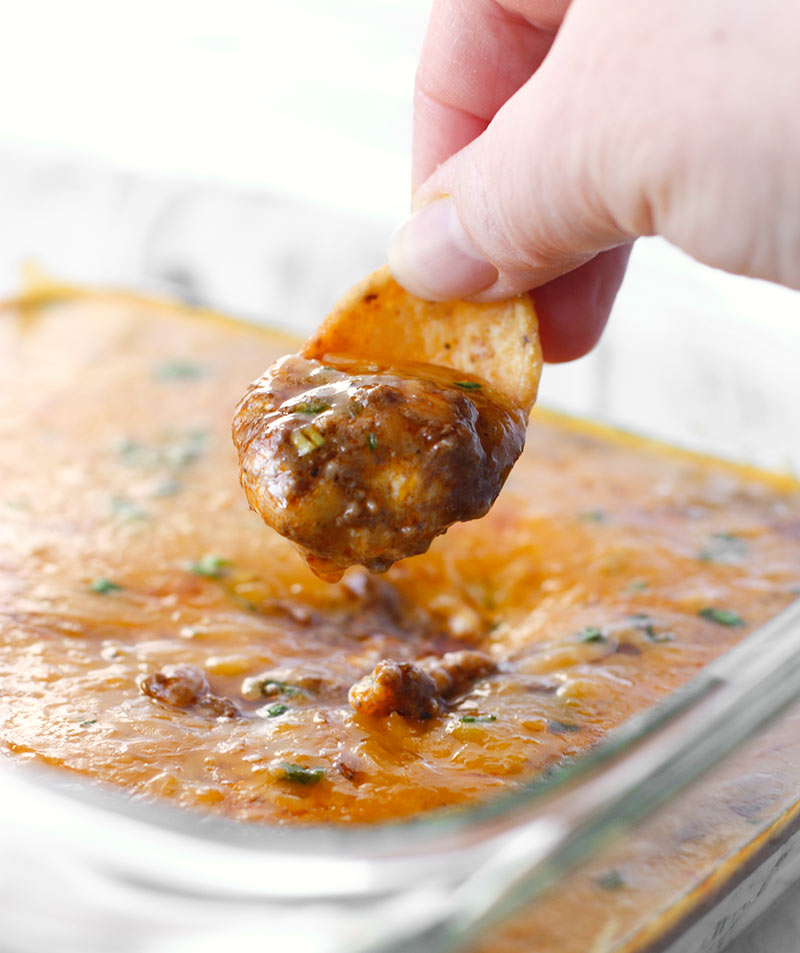 But I like to supercharge my version of Cincinnati chili dip with a few very tasty extras.

Cincinnati chili dip is the kind of guilty-pleasure appetizer that quickly draws a crowd around the bowl, and works equally well for backyard bbq’s as it does indoor board game night. But it’s February, folks, so that means one thing:

Are you ready for some football!

Nutritional information, if shown, is provided as a courtesy only, and is not to be taken as medical information or advice. The nutritional values of your preparation of this recipe are impacted by several factors, including, but not limited to, the ingredient brands you use, any substitutions or measurement changes you make, and measuring accuracy.
461 shares
Click here to cancel reply.

It's one of my favorite comfort food winter meals. :D

It's been ages since I've made "Skyline Dip" and now at 10 in the morning, my mouth is watering. Think perhaps I'll switch around our menu for the Super Bowl so thanks for this post. Never thought about adding sour cream to a 3-way (and have never seen anyone with it) but I plan to ask for it next time I'm there. Yum!

Ask for a side of sour cream - they'll give you a nice amount in one of those plastic dressing cups. That way you can test and see how you like it. (Deliiiish - now I'm wanting Skyline for lunch....)