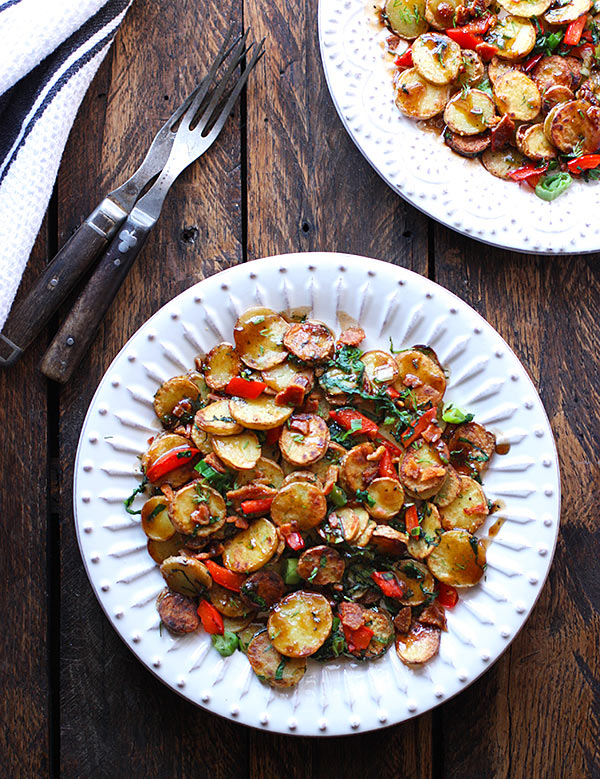 You might have noticed from this blog that I don’t post a lot of desserts here. Peeps go crazy for desserts. But, I just don’t have a sweet tooth. Baking bread, yuppers. A-okay on foccacia and flatbread and scones. Brownies and cakes and stuff. I don’t know. I take a few bites and I’m like, that was really good, but then I’m done and the whole thing just sits there. Those peanut butter chocolate oat cookie bars from the other day? They ended up going to work with me. I had wanted something peanut butter-ooey-gooey-chocolatey, and one of those squares really hit the spot. Over and out.

But that doesn’t make me a nutritional saint. Believe me. Salty snacks are my weakness. Salty potato snacks, to be specific. Potato chips. Kapow! French fries. Boom! They get me every time.

So, when the potato carby carb carb craving happens to hit at a time when I can do something productive about it, I try to be good and healthy it up. 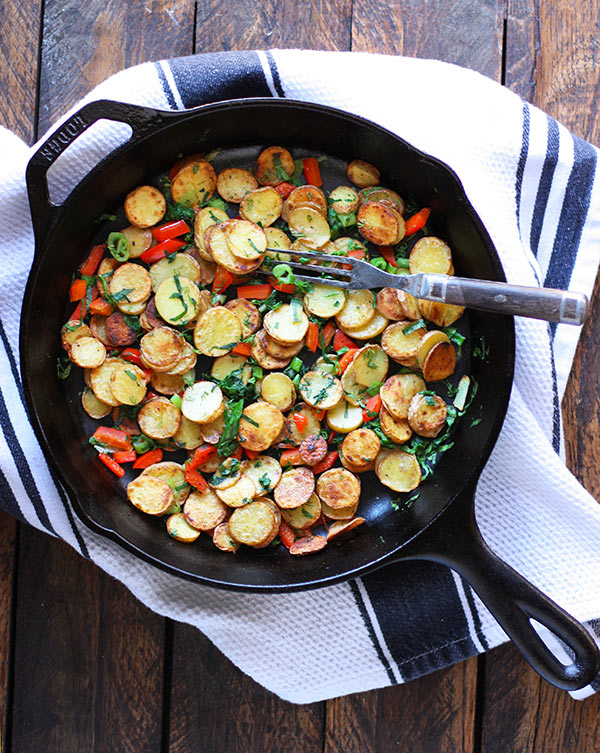 A skillet filled with sauteed potatoes, some veggies and a good helping of slivered spinach, a little bacon for extra flavor (fakin’ bacon tempeh for me), and a lovely balsamic dressing sweetened with maple syrup and kicked up with some really serious stone ground mustard. 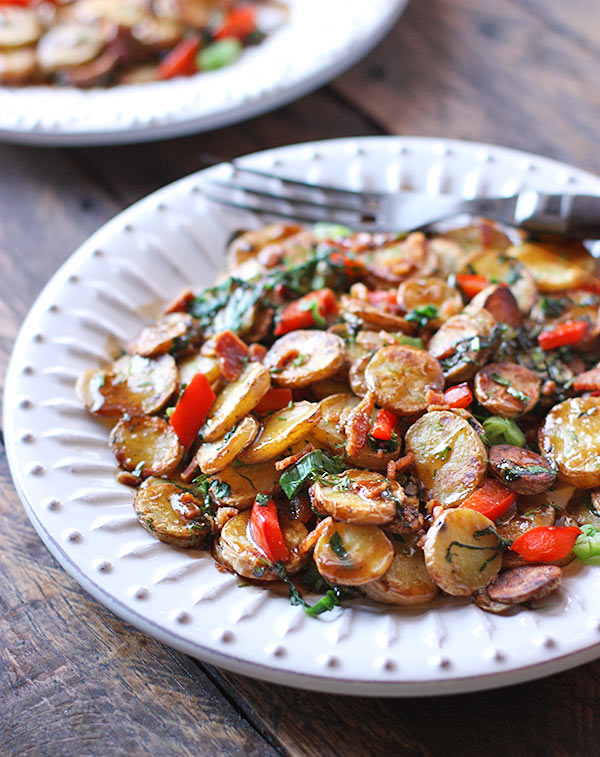 And guys, believe it or not, this recipe is vegan, gluten-free, dairy-free, and if you skip the tempeh, soy-free. I wasn’t going for any of that benefit when I was behind the stove, but as I was typing out the recipe, I realized it was so. What kicked it over into the vegan camp was that I used maple syrup instead of honey, my usual go-to sweetener. I love honey — especially local honey — but lately I’ve been using maple syrup and am really digging the little extra oomph of flavor.

It just goes to show that, no matter what your dietary requirements might be, beautiful, soul-filling food is always possible.

Very soon, I’m going to make this recipe again with sweet potatoes instead of fingerlings. Then it will be practically superfood-healthy!

Even though I’ve classified this as a side dish, I actually had it for dinner with a big green salad (and a frosty margarita, shhh), and it was just the guilt-free, salty-potato-snack meal this girl needed to curb that compulsive reach for the potato chip bag.

yum! this looks amazing! great photos and awesome recipes. found you on food gawker and cant wait to try some of these! xx. gigi. www.gigikkitchen.com

I eat fried potato mixes for dinner too. It allows me to throw in a bit or that I want to use. What is pretty cool about your recipe is the seasoning. Soooooo I am going to have to try that. Gosh when I was reading how you don't have a sweet tooth, I was getting a little worried. So thanx---laughing here---for sharing your food group that causes you to go to sideways at times. Particularly when the trickle down is this sweet---pun intended---little recipe.

Even though my blog name implies an insatiable sweet tooth (which I do indeed have), I totally know what you mean about salty potato-y carb cravings - and they hit me far more often than sweet cravings! This looks fantastic - much healthier and interesting than the typical mayo-laden potato salad. I've never tried a sauteed potato salad, but I have a feeling that's about to change very soon!

Are those red things in the picture, bell peppers? Looks yummy.

Good grief, how did I leave that out? Yes, red bell peppers (and I updated the recipe). Thanks for letting me know!