Sometimes, SoupAddict doesn’t know where her head is. If SoupAddict were smarter, she would be way too embarrassed to admit this, but since she isn’t, she will.

But, skipping to the end of that sordid story, and thusly avoiding the plot twists and tedious doings of minor characters who only serve as distractions to the real tale, SoupAddict has been set to rights. The Hot Brown, in fact, contains many of her very favorite sandwich ingredients: turkey, bacon, tomatoes, bacon, bread, bacon. Oh, and cheese sauce. Poured over bacon.

Yes, indeedy. SoupAddict is officially a reformed Hot Brown detractor. She has, in fact, served them two weekends in a row, which is unheard of, since there are many, many new sandwiches to be discovered in this crazy world. (For the full story behind the dish’s name and the original ingredient list, visit the Brown Hotel’s web site.)

SoupAddict is still happily plowing through her 2009 store of vegetables. She doesn’t have any small onions, but this shallot will be the perfect substitute.

The original recipe calls for a 1/2 tablespoon of chopped onion, whereas the shallot yielded a full tablespoon. Does this blatant doubling of ingredients worry allium-lovin’ SoupAddict? That would be no. 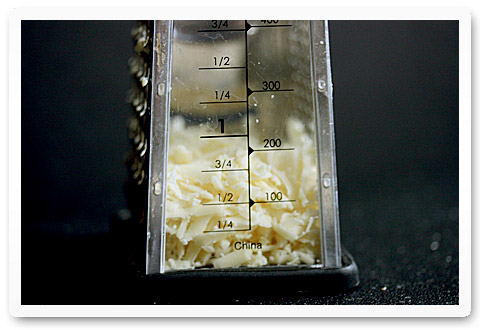 The recipe also calls for a mere 3/4 cup of shredded cheese, shown here, for the cheese sauce. Now, here’s the thing, people. The great chefs of the world know to exert ingredient self-control, because it’s the light and delicate balance of flavors that produces an elegant dish. SoupAddict, however, is not a great chef of the world, and “elegant” is not part of her repertoire. No, SoupAddict is 100% certain she will never be preparing a dish for POTUS. (That’s President of the United States, for those of you who never watched West Wing.)

And if she were tapped to prepare, say, this Hot Brown, for POTUS, she’s certain the dish would not make it past Secret Service, because they would immediately detect that she put waaaay too much cheese and shallots in the cheese sauce. Which is inelegant.

But, while you’re here, you might as well watch as SoupAddict prepares her inelegant cheese sauce. Shallots and butter go in first. Then flour. Then milk or half-and-half.

Add salt, pepper and a pinch of cayenne. Stirstirstir.

Strain the white sauce to remove the shallots and other inelegant clumps.

Now to the assembly. Toast your bread lightly and arrange the slices on a broiler-proof pan. 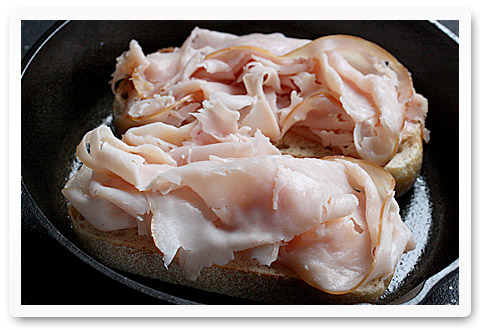 Pile on the turkey. You can use either deli turkey, shown here, or turkey leftovers. It’s all good. 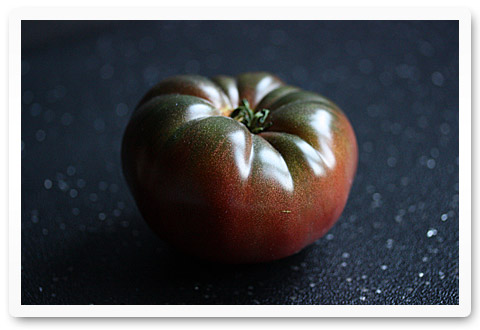 SoupAddict nearly ran over a small, besweatered child with her cart when she saw a stack of Cherokee Purple tomatoes in the produce section at Kroger. An heirloom tomato. In January.

Oh my. SoupAddict had been on the fence about including nasty winter tomatoes, but the Cherokee Purple stole her summer tomato lovin’ heart. Look how pretty and juicy. No mealy, pale pink tomatoes here, no sir. 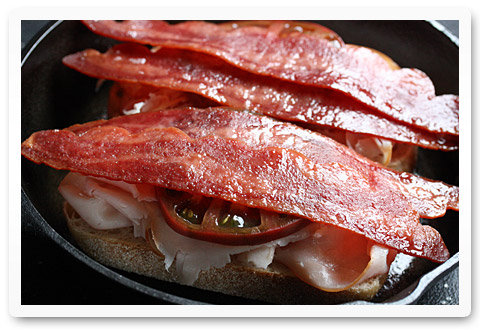 In case you haven’t figured it out yet (in which case SoupAddict must wonder where you’ve been – not on this blog, that’s for sure), SoupAddict loves bacon. This is turkey bacon, which was all she had in the fridge, but it still counts as bacon in SoupAddict’s book. Especially when there’s no other bacon of any sort to be found in the house, and she’s far too lazy to go back to the grocery store for the third time today. 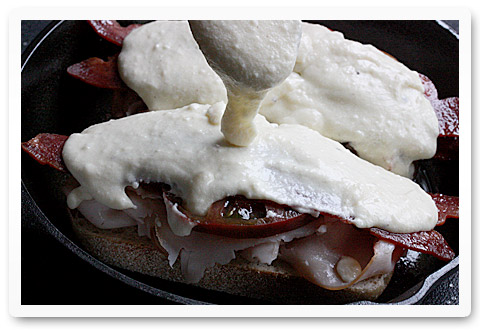 Spoon on the inelegant cheese sauce.

Then broil until hot and bubbly. 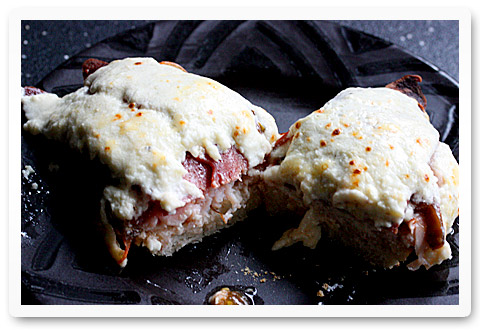 SoupAddict laments having spent all of those years Hot Brownless.

Look at all of that cheesy goodness. Far too cheesy and inelegant for discerning palates.

Yup, too cheesy. And bacony.

But no worries, SoupAddict will fall on her sword and take this rich, cheesy, bacony, inelegant sandwich off your hands. Yes [chomp] indeedy [nom nom nom]. You’re welcome.

Instructions:
In a small saucepan cook the shallots in the butter over moderately low heat, stirring, until it is softened, stir in the flour, and cook the roux, stirring, for 3 minutes. Remove the pan from the heat and add the half-and-half, scalded, in a stream, whisking vigorously until the mixture is thick and smooth. Add the cayenne and salt and pepper to taste and simmer the sauce, stirring occasionally, for 10 to 15 minutes, or until it is thickened to the desired consistency. Strain the sauce through the fine sieve into a bowl and add the Sherry and Cheddar, stirring until the mixture is smooth.

Arrange the toasts in a baking pan and divide the turkey among them. Top each sandwich with a tomato slice and 2 slices of the bacon and spoon the sauce evenly over the sandwiches. Sprinkle the sandwiches with the Parmesan and broil them under a preheated broiler about 4 inches from the heat for 5 to 7 minutes, or until the tops are brown and bubbly.

I love your blog! Your photos are making me so, so hungry! I can't wait to get into my kitchen and try out some of your recipes...thanks for the inspiration :)

Nick, truth be told, I usually don't strain it out either. For the photos above, I made the dish twice (winter's short days makes the lighting a problem). The first day, I strained the sauce - you can see how smooth and silky it is in the photo with the sauce in the pot. The rest of the photos were from the second day, when I didn't strain. See the small lumps? Those are the finely minced shallots. ;)

I just made this dish for the second time, last night. Delicious again, of course, but I wanted to add that I didn't strain the sauce this time. Why throw out the yummy shallots (and add another step to the prep)? Also, this time I used half Cabot Cheddar and have Smoked Gouda for the cheese, because, well, because I could.

I have enough sauce left over to make another one, so I think this time I'll just warm up the sauce, assemble the rest as a panini, and pour the sauce over the top...

I made these last night - delicious! My mother used to make a variation of this when I was a kid, but her sauce wasn't nearly as thick and rich.

Also, thanks for the tip in your other post about dredging the bacon in flour in. I usually bake my bacon, but never thought of the flour thingie. Good stuff!

Nick: I'm almost regretting having done this post because the sandwich is so addictive, and now I'm reminded of it all the time. (And most of those times occur when I am absolutely unable to make one.) Gah!