Vegetarian paella is a crowd-pleasin’, all-season dish that’s easy to prepare and absolutely craveable. The saffron-scented socarrat is the highlight of paella, of course, so serve with your favorite veggies and create a meal all will love! {Vegan, gluten-free} 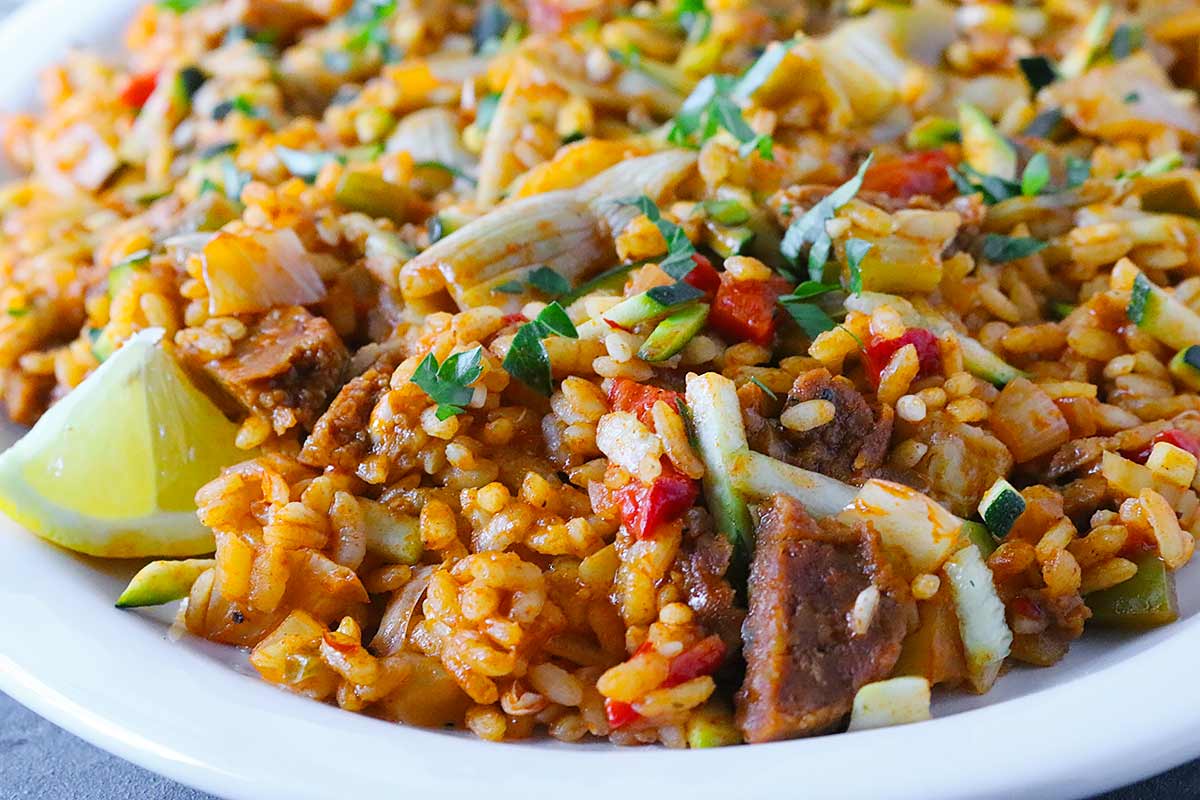 Jammin’ over a repeat of this dinner recently, I wondered, not for the first time, how a centuries’ old dish, once considered a peasant’s meal, could be so incredibly delicious by our modern standard of salt-fat-sugar overload.

Vegetarian paella is all of these things, and more. You take your favorite vegetables and combine them with plump rice and season it all in a savory saffron broth. One pan, so simple, it’s practically magic. 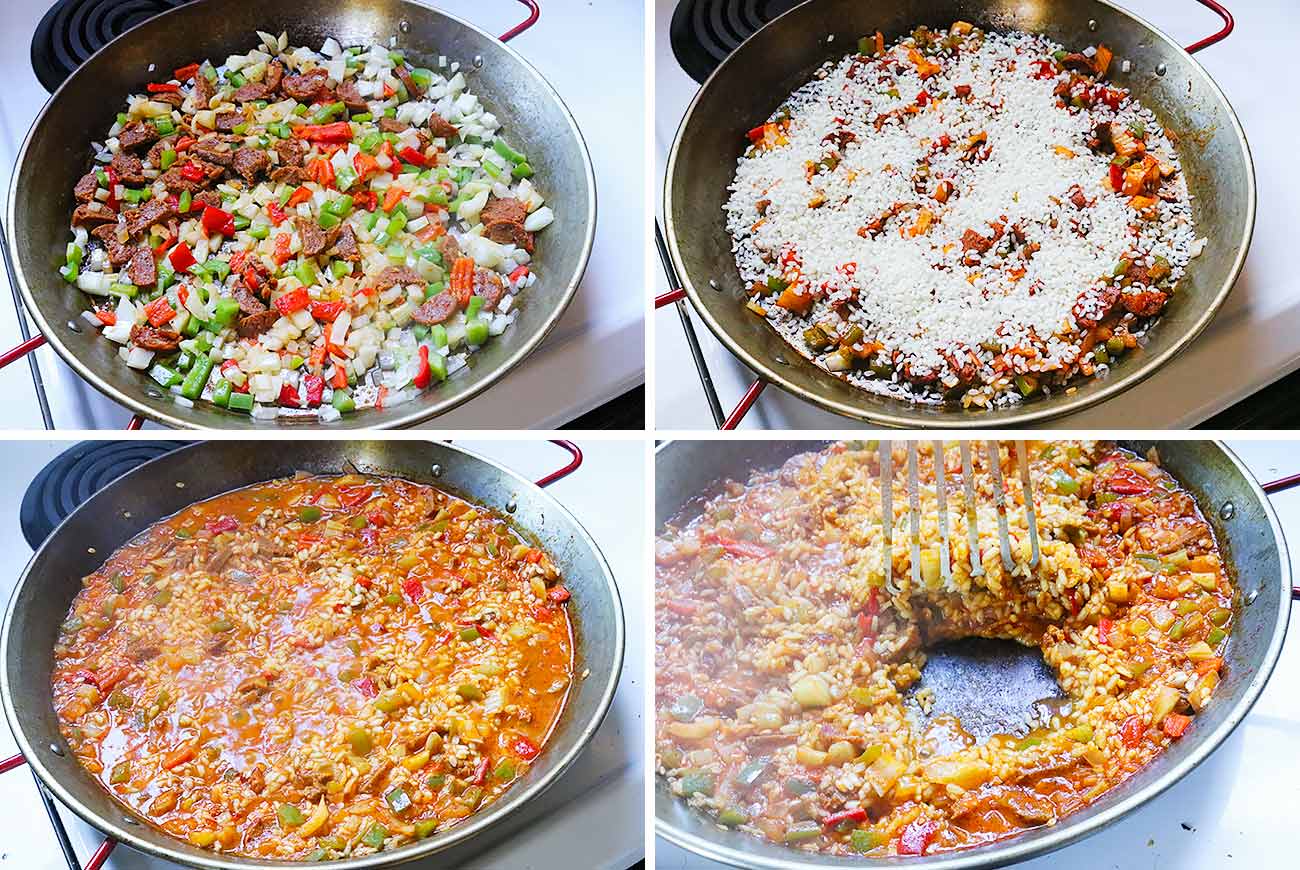 I hope you’ve all had paella at some point in your lives. 🙂 It’s my favorite food for a crowd, especially in the summer when you can cook it up on your grill, and it becomes a central gathering point as you, the clever chef, layer ingredients one after the other, in ways that seem puzzling to those not in know, and half an hour later -boom!- you’ve got the most amazing savory dish that peeps just can’t help themselves from going back and getting seconds.

Serve it up with some frosty margaritas, and you’ve got yourself a party!

It’s the opposite of risotto, in fact. With paella, you don’t. stir. the. rice. because you want it to cook to the point of almost sticking to the pan, where it forms a thin, toasty layer of golden rice. Toasty rice, people! That’s where it’s at.

In the fourth photo of the collage above, you can just make out the browned rice, scooped up just beneath the spatula. Perfection! 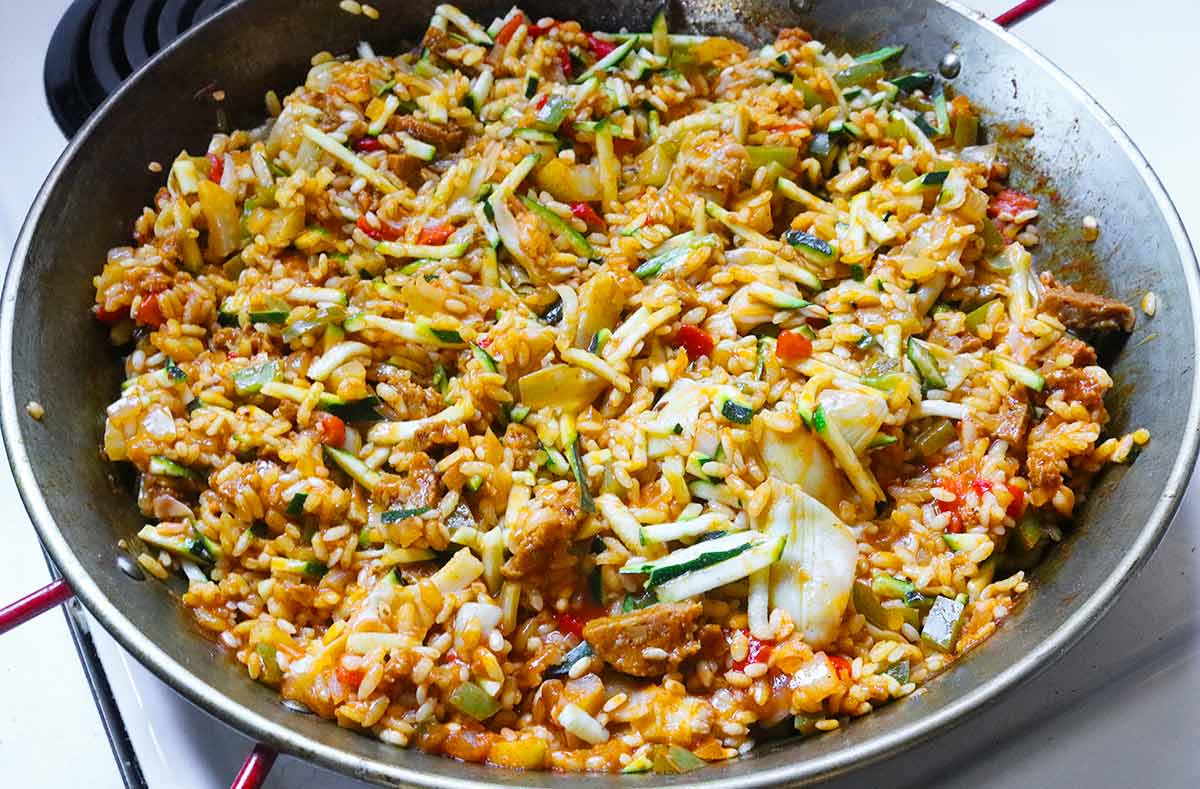 Now, today, it’s not quite summer yet #impatienttoetapping but it’s still the perfect time to talk about paella, because you can make paella outside and inside: stove top or grill grate, it’s all good.

Take a moment to dig that groove: stovetop paella! The traditional paella pans (see below) work equally well inside on the stove as they do outside on a grill. Vegan paella, all year long!

And I also want to emphasize the vegetable-strong balance of this vegetarian paella. Paella is traditionally used with whatever protein is on hand — chicken, clams, shrimp, sausage, rabbit (whut!) — but IMO paella’s delectable flavor comes from the combo of the rice, the sofrito vegetables (onions, garlic, and peppers), and the saffron and pimenton (smoked paprika).

Replacing the meat with vegetables is an awesome way to healthy up this dish, and get more of those soon-to-be-everywhere summer veggies into your grateful body.

For interesting texture and a little hit of spicy sausage flair, I’ve added vegetarian chorizo sausage, which — and I know this is being a little sneaky — should visually satisfy your skeptical carnivores that you’re not just trying to pass off something that’s less of a meal, and more of a side dish.

(But if you really need meeeaaat in your paella, see my paella recipe prepared on the grill, with step-by-step photos = baby blog flashback!) 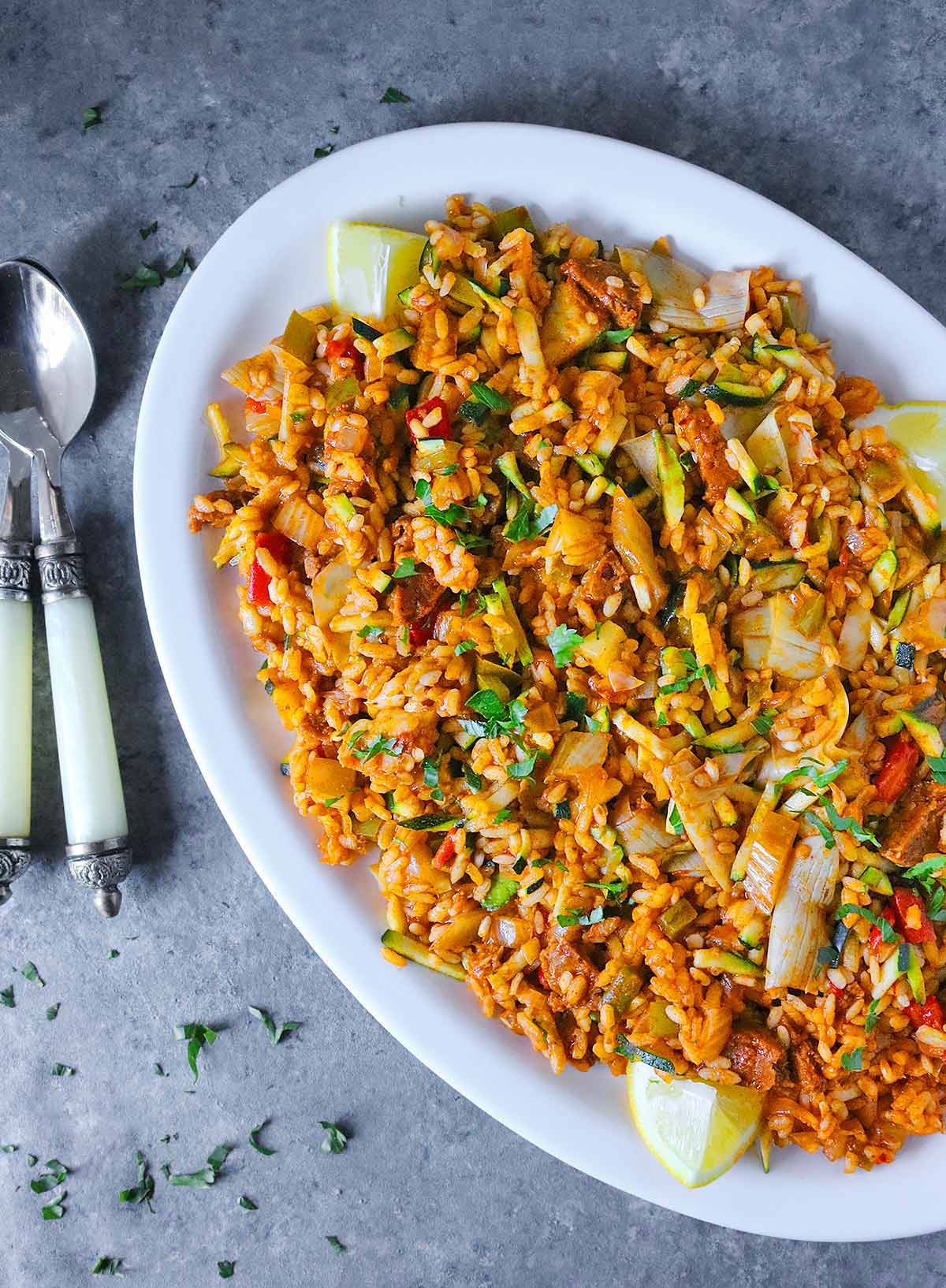 If you need more proof that paella is an awesome meal for a crowd, check out the photos from the Stone Soup party that my friends at La Soupe had last fall, featuring their ginormous paella pan. (And while you’re on the site, learn all about this amazing, award-winning non-profit that tackles both childhood hunger and food waste in one swoop, using soup as the catalyst. <<< SoupAddict loves dat!)

And speaking of paella pans … I do want to share my love of my decade+ old 15″ paella pan (affiliate link). They’re available in a staggering array of sizes (did you see the La Soupe photos, lol?), and work great on both stove top and grill, radiating heat efficiently across its carbon steel surface.

Plus, those red handles. 😀

Vegetarian paella is a crowd-pleasin', all-season dish that's easy to prepare and absolutely craveable. The saffron-scented socarrat is the highlight of paella, of course, so serve with your favorite veggies and create a meal all will love!
Prep Time15 mins
Cook Time30 mins
Total Time45 mins
Servings: 4 servings
Calories: 355kcal
Author: Karen Gibson

Calories: 355kcal
Nutritional information, if shown, is provided as a courtesy only, and is not to be taken as medical information or advice. The nutritional values of your preparation of this recipe are impacted by several factors, including, but not limited to, the ingredient brands you use, any substitutions or measurement changes you make, and measuring accuracy.

Pinterest fans, if you’d like to save this recipe for later, use these images (or any image above) to pin to your boards (they’re small here, but thanks to the magic of the interwebs, they’ll be full size when you pin them). Thanks for sharing, and most of all, thank you so much for reading this post! Blogging wouldn’t be any fun without you! 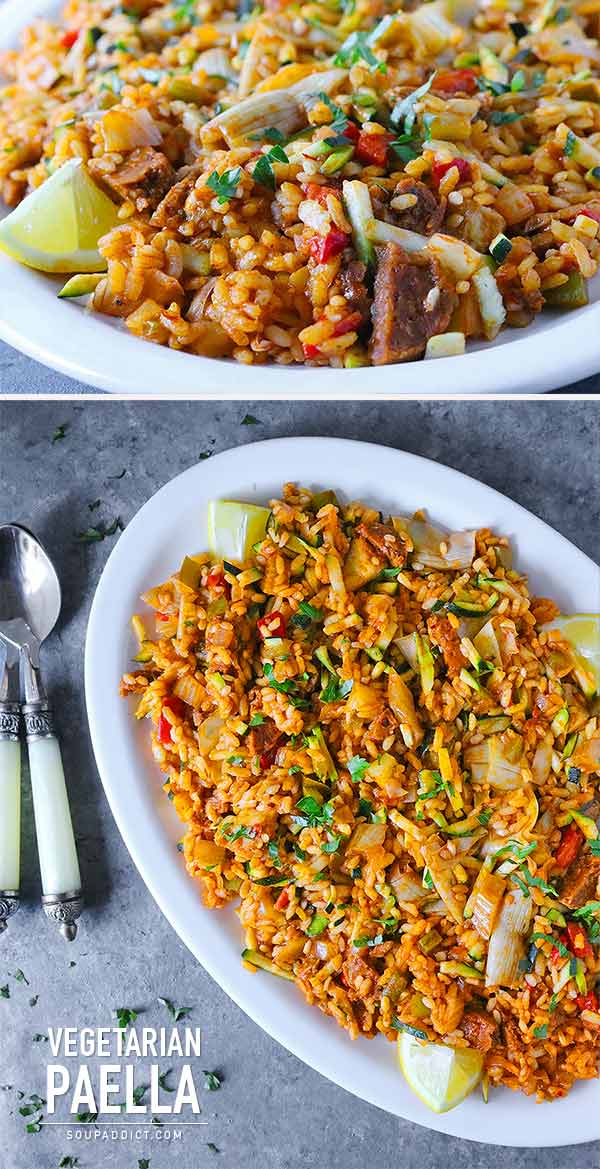 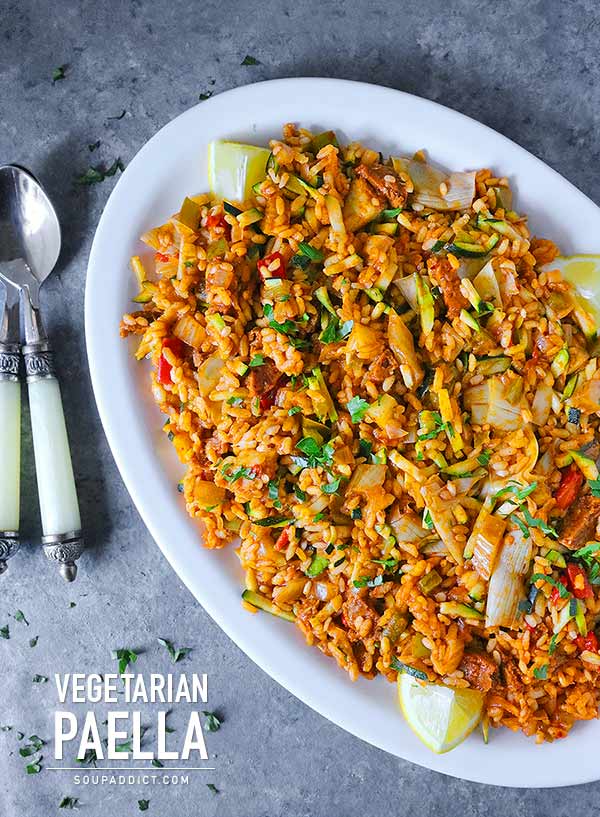 We grilled this up at a cookout recently with vegetables from our garden, and we all agreed this will be going into regular dinner rotation. I was always too intimidated by paella, but felt more confident using vegetables instead of shellfish. The saffron rice ... so good!