Preserving corn is one of the great joys of summer produce. With this easy technique, you’ll have sweet, delicious, crunchy corn all year around. 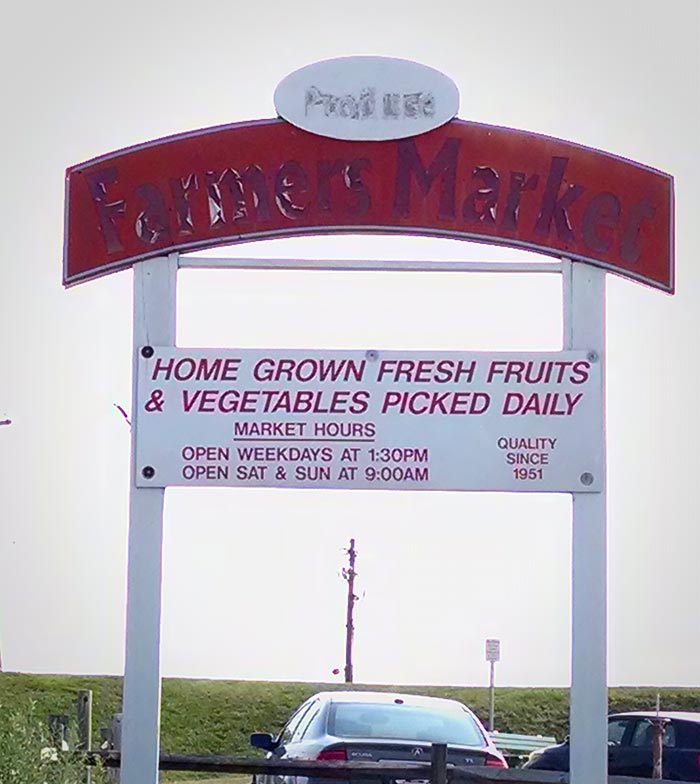 Tucked away on a corner of an active airport is one of Cincinnati’s oldest — and definitely most unassuming — open air produce markets. The sign heralding its presence is huge, but old and worn. The parking lot is plain gravel, and a low cloud of rock dust carpets the scene on dry, hot August days like fog, as a constant stream of cars come and go.

Along with my own gardens, the Lunken Farmers Market is my summer happy place. 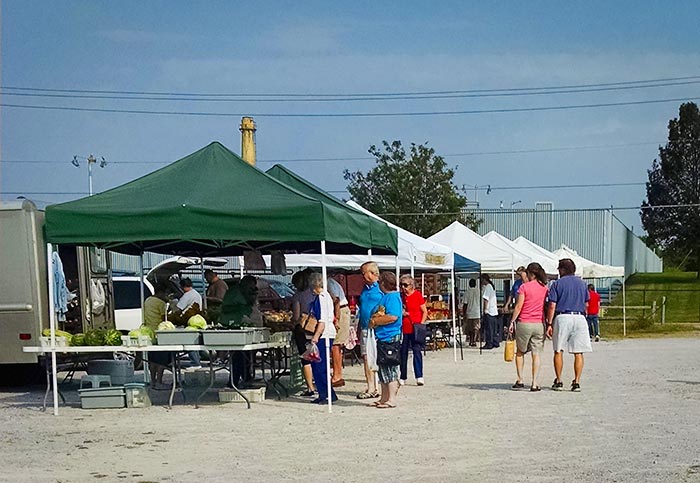 Lunken Airport is a regional hub for private corporate flights and the occasional visit from POTUS, VPOTUS, and/or FLOTUS (Air Force One lands here instead of the far busier national hub, CVG). The history of exactly how a produce market ended up sitting on a chunk of airport land next to the end of the lone runway is fuzzy in terms of official documentation. But the story goes that the first sellers who occupied the Lunken market had been forced to move from their original location downtown, along the Ohio River, when commercial construction took over, leading to what would become our professional sports stadiums for the Cincinnati Reds and Bengals.

And little has changed at the market since then. Thank heavens. 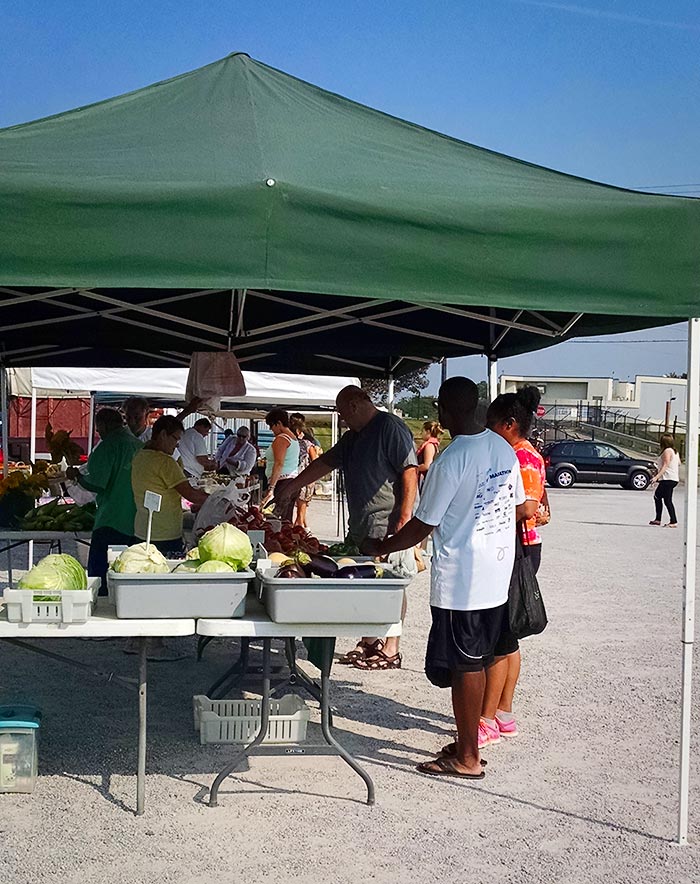 You won’t find kettle corn, or smoothies, or gluten-free snacks, or food trucks. The average age of the farmers setting up here is probably closing in on 80.

You won’t find man buns and yoga pants among this set, and no photographer from Kinfolk will be spied framing a cover shot. 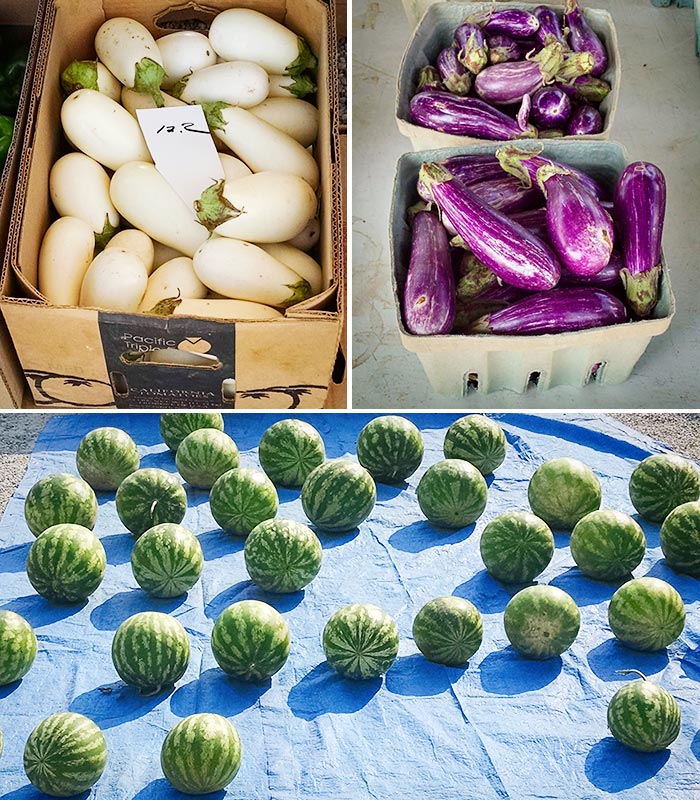 But what you will find is lots of produce, grown expertly on land that has been in the farmers’ families for generations. You’ll find friendly, soft-spoken farmers who have made this lot their summer home, not just for years, but for decades.

And you’ll be elbow-to-elbow with knowledgeable, no-nonsense customers who value quality produce over spectacle. 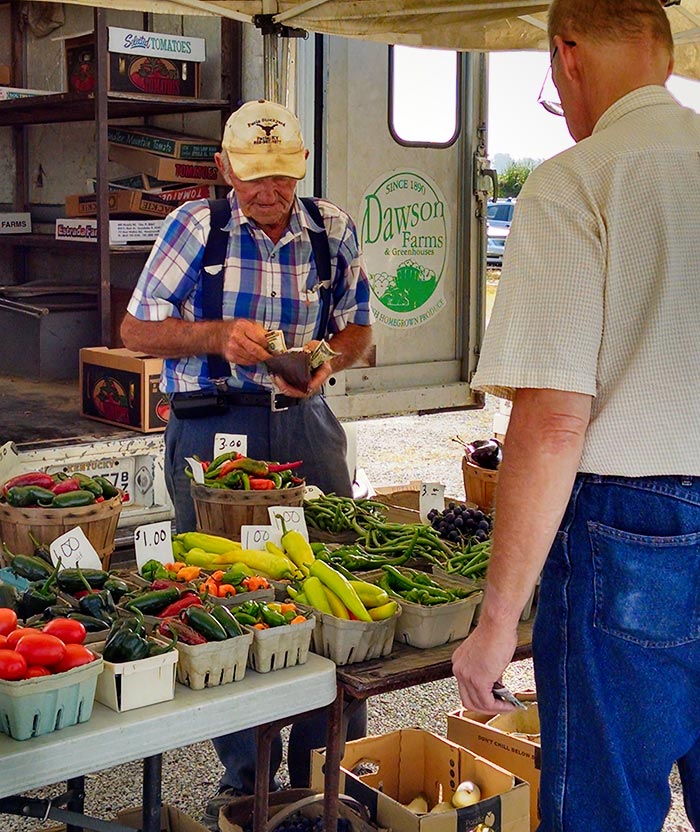 One of the [many] things I love about this market is that their goods are priced for bulk. Look at the amount of peppers that you get for a dollar (and those huge baskets at the back edge of the table for $3.00).

Customers here are different than at the modern markets. They know the vegetables by variety. There are no lines clogged by trendy-restaurant devotees asking about the flavor profiles of purple vs. white eggplants.

In fact, when you buy a basket of sweet potatoes, the farmer is more likely to mention a winter storage suggestion than a recipe. They know we know how to cook. They know we’re buying to both use and store. And more than once have they helped me solve a garden problem that left me perplexed.

We’re their people, and they’re ours. 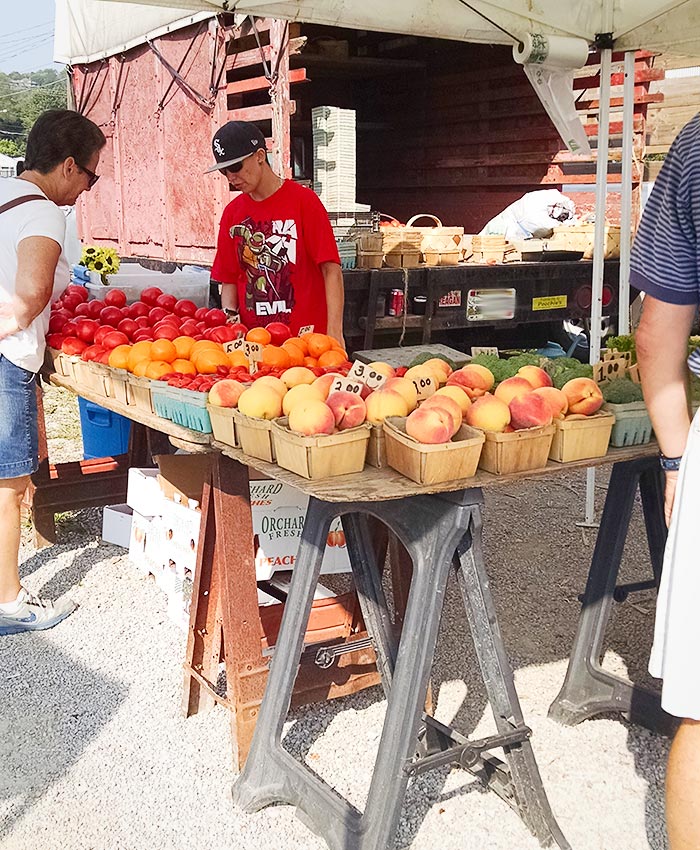 There is, of course, a place and a need for the modern community farmers’ markets. Those markets have driven the societal return to the kitchen and the rediscovery of homegrown, local produce. They’ve powered the cottage food industry, and provided income and customer bases for the small businesses that give our city character and quality. I have an enormous appreciation and love for those markets, particularly my own neighborhood market and the vendors who sell there.

But folks like me — and there are a lot more of us than you think — get quickly worn down by the crowds, the kids, the noise, the lines, and the general fussiness of the experience.

In late summer, when my own gardens are already producing most of what I need, I skirt the modern markets and head for the quiet of Lunken and the crinkly smiles of my very favorite farmers. 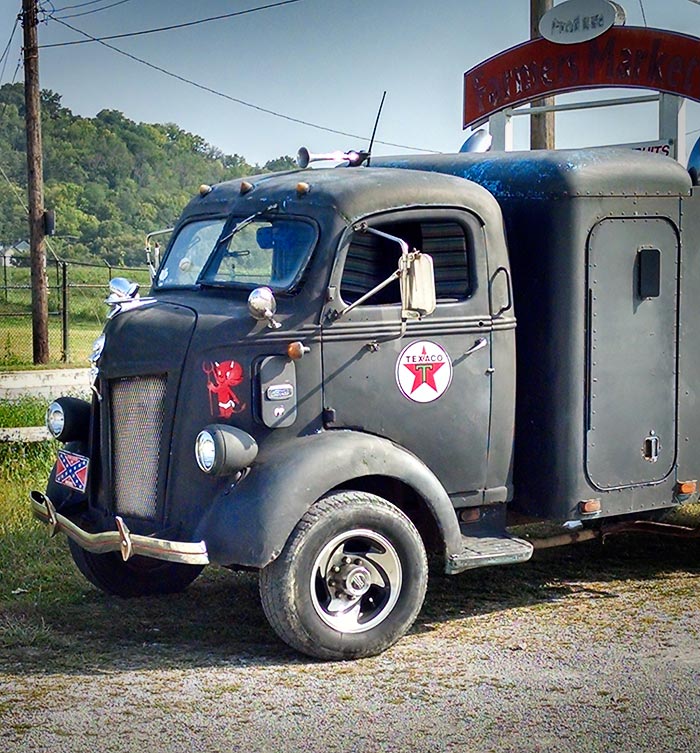 And you never know what you’ll find at the Lunken Market. I’ve never seen a truck like this before, and wish I had caught the driver (who left before I finished shopping) — there has to be a story behind this vehicle. 😉 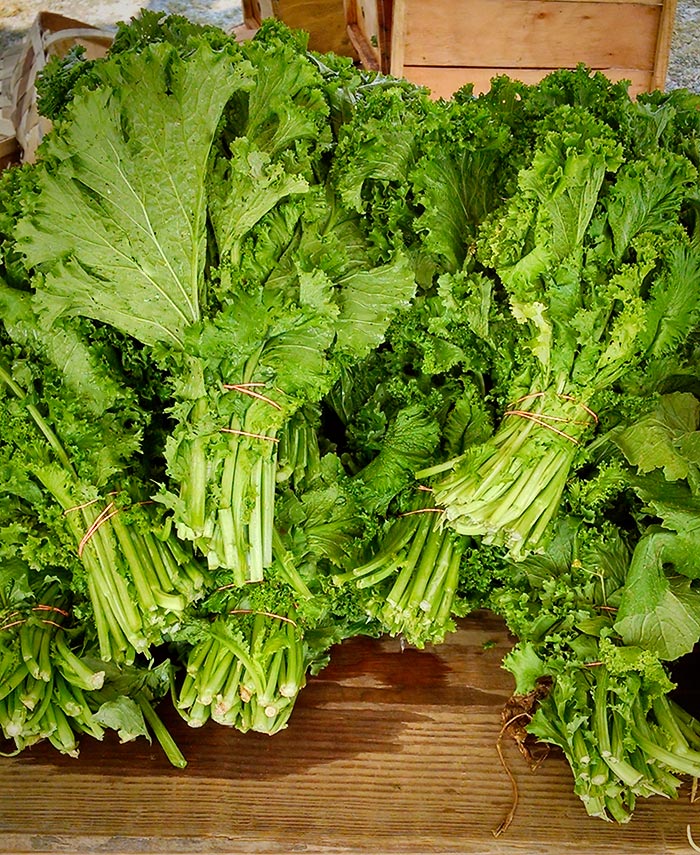 This old-timey market might be firmly rooted in tradition, but never say that these farmers’ don’t keep their finger on the pulse of the people. You want kale? Well, there be kale, by golly. 🙂 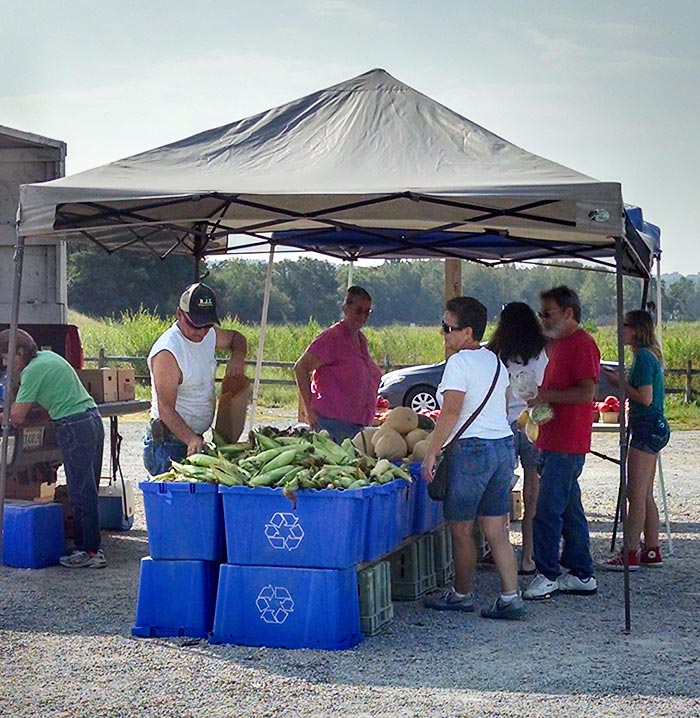 The Snyder’s are a fixture at the Lunken Market, and I have a soft spot for the family, who lost their patriarch, the kind-hearted and sweet-as-his-corn Walter, just last year.

There is no corn like Snyder’s corn, and I will drive out of my way to Lunken to get it. Look at those pearlescent kernels in the photo two below — yes, they’re as juicy as they look. 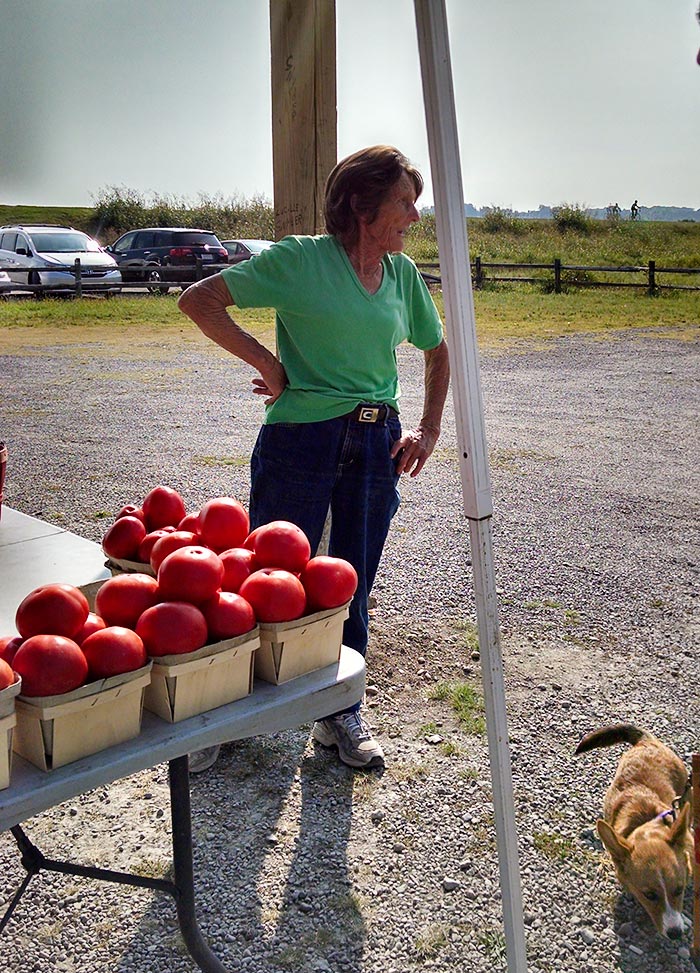 This is Lucille, Walter’s wife.

When I said the Snyder’s are a fixture at Lunken, I meant it. If you look closely over her right shoulder, you’ll see her name markered on the sunken wood post that borders her stall. That’s about as permanent as you can get at a farmers’ market.

Lucille sold corn, tomatoes, and melons at her husband’s side for all the years I can remember, and now does so with one of her sons. Although she must be in her 80’s, on the day I took these photos, I saw her sprint across the parking lot, delivering a bag of Romas to a customer who had left it behind. She’s spry and funny and generous and proud of her pink tomatoes (and rightly so).

There’s nothing like a life-long farmer — devoted to the land and family, working year after year in unforgiving conditions to bring good, healthy food to our neighborhoods. They’re kind, they care, and it shows in their food.

Fool-Proof Preserving: How to Freeze Corn

So what did I do with my stash of Snyder’s corn? I went home, shucked it, and prepared it for freezing, that’s what. More than any other summer vegetable — even tomatoes — I enjoy having access to summer corn in the dead of winter, when July seems impossibly and cruelly far away, and hot soups are crying out for something sweet and crunchy. 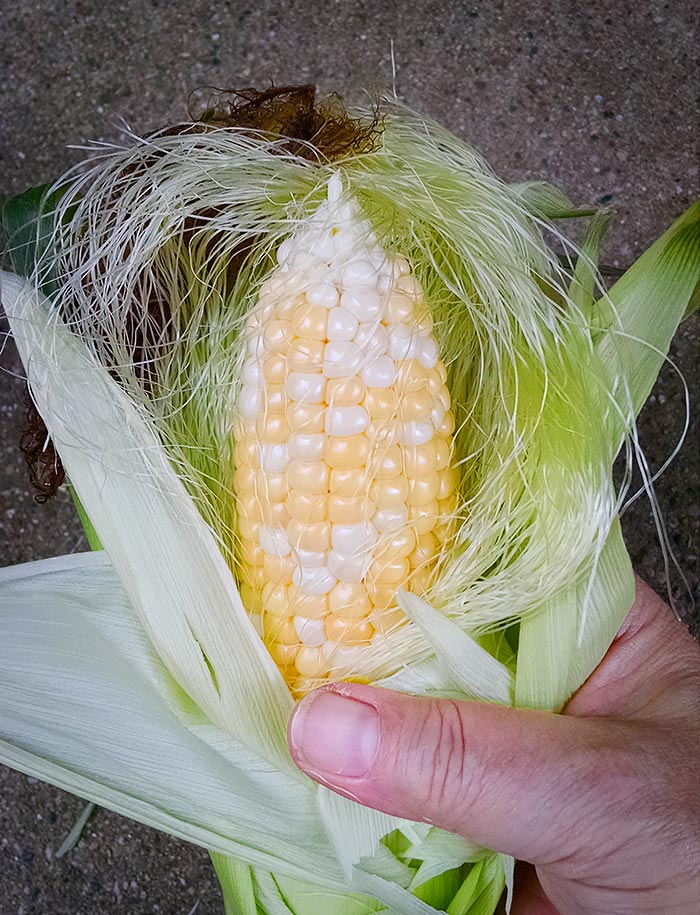 There are a dozen ways to freeze corn, including leaving it encased in its husks (after removing the silks), as though it just came straight from the fields. Or husked but still on the cob. 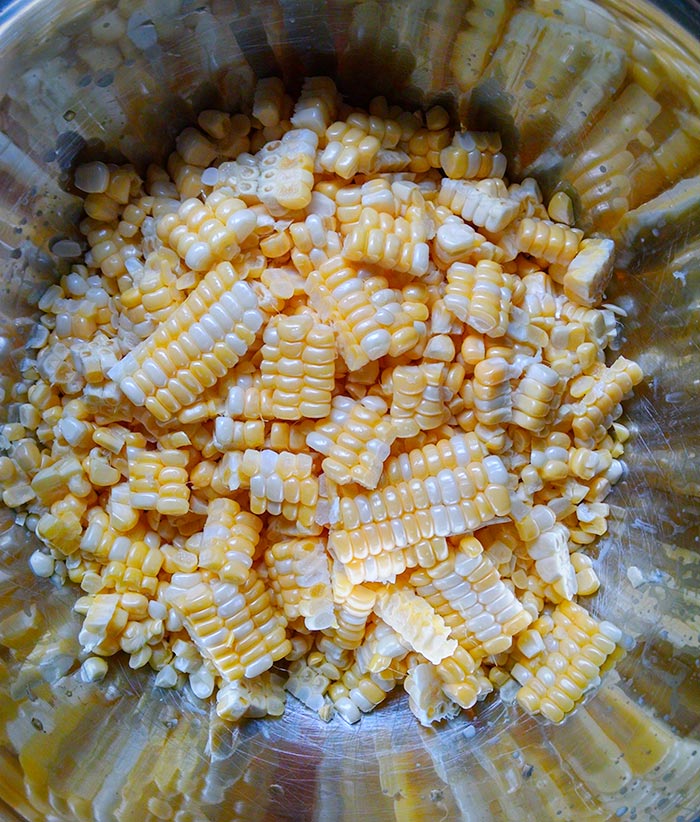 For convenience and freezer space considerations, I remove the kernels and store them in quart freezer bags. If I don’t need the entire bag for a recipe, it’s easy enough to crack off a portion without thawing the rest.

To further simplify the process, I don’t blanch the corn. Blanching kills the enzyme process that breaks down sugars while everything hangs out in the freezer and leaves frozen vegetables chewy and flavor-drab. However, I overcome that need by giving the kernels a room-temperature sugar-salt bath before bagging them up for freezing. The sugar adds sweetness and, along with the salt, acts as a preservative.

The resulting corn stores for months and tastes just as sweet as it went in to the freezer (plus, it still has that raw crispness that any amount of cooking would’ve stripped away – even a quick blanching). 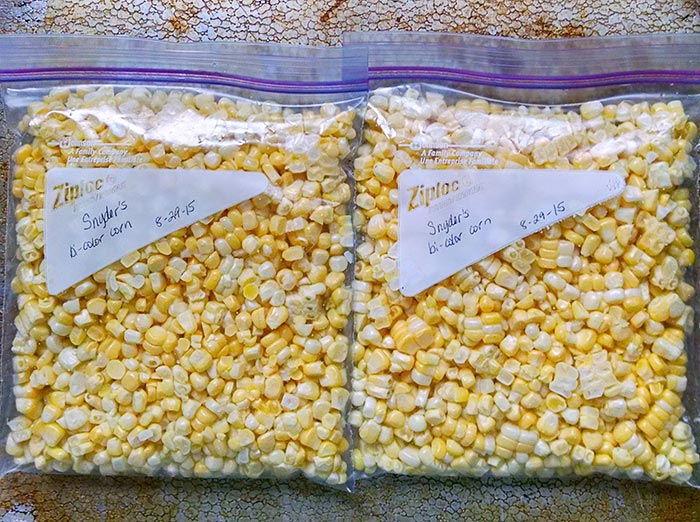 I have a feeling that there was more like three quarts’ worth of corn in the bag, but those luscious rafts of sweet, raw kernels kept disappearing from the bowl.

In Praise of the Old Ways, Plus Preserving Corn

Nutritional information, if shown, is provided as a courtesy only, and is not to be taken as medical information or advice. The nutritional values of your preparation of this recipe are impacted by several factors, including, but not limited to, the ingredient brands you use, any substitutions or measurement changes you make, and measuring accuracy.
213 shares
Click here to cancel reply.

LOVED this post! I can remember going to this market as a little girl in the 60s - there were several row of vendors then. They sold veggies by the bushel - evenings were spent on the porch trimming green beans and beets for canning. Such sweet memories of times spent with family before the days of internet and smart phones! Thanks!

I love everything about this article, Karen. Our farmer's markets here are not the old-timey kind, although I am grateful for what there is. My childhood memories of driving a couple miles out from Chicago to the best farm stand/field in the world for corn and tomatoes remain strong; the same people, the same delicious produce. You've made me nostalgic for all of it. And now I have tips for freezing corn, although, honestly, non-midwest corn is hardly worth the steps, by comparison. Thanks for this post.