A deeply-flavored homemade savory base highlights this lemongrass curry soup, made substantial with barley and topped with cashew cream. Naturally vegan, absolutely delicious!

When I was a full-on vegetarian, one of the things I missed most was chicken soup. Fake chicken soup just wouldn’t do it. I wanted chicken soup. It was and is, hands down, my favorite. I could eat mulligatawny or couscous chicken soup for every winter dinner between now and April and be happy as a clam.

Oh, I love vegetable soup, too — especially with homemade vegetable stock — but it just doesn’t quite hit the spot the way chicken soup does. Especially when colds and flu start flying around and, more days than not, you’re feeling slightly off (if not downright sniffly).

So as a long-time reader of Heidi Swanson’s cookbooks and blog, 101Cookbooks.com, I was moved to action when she recently shared a recipe for lemongrass turmeric curry paste. She has such a unique instinct for combining flavors for simple but inspired uses. I pulled up my shopping list app and started typing, imagining all the possibilities.

Because this: it’s more than a paste … it’s a soup base. A vibrantly flavored soup base with citrusy Thai leanings — lots of shallots and ginger and lemongrass and spices — that can be frozen for quick (or not so quick) soups, any time. The turmeric stains it a vivid yellow, and adds a good dose of its earthy nutrition to boot. Vegetable soup is yummy. But vegetarian — vegan, actually — lemongrass curry soup is vegetable soup with jazz hands. It’s uplifting and comforting, all on the same spoon.

How I wish I had had this magical brew in my vegetarian cooking repertoire! 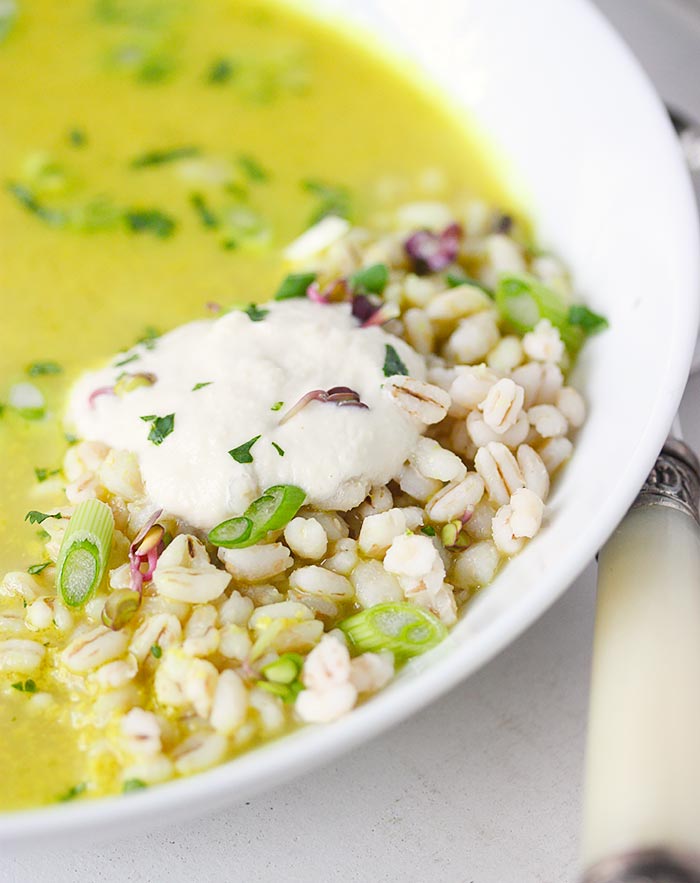 This brothy version of lemongrass curry soup is sippable comfort, with a nice amount of barley chew to make a satisfying lunch. I’ve frozen half of the batch of paste, and have been sneaking spoonfuls into different dishes, especially rice-based recipes. Such a flavor boost!

Here are few soups in my regular rotation where I plan to experiment with the lemongrass curry soup base:

for the cashew cream

for the lemongrass curry soup base

prepare the lemongrass curry soup base

This is pretty far from the usual flavours I use, but it sounds incredibly delicious. I'll have to try this soup! Looks fantastic!