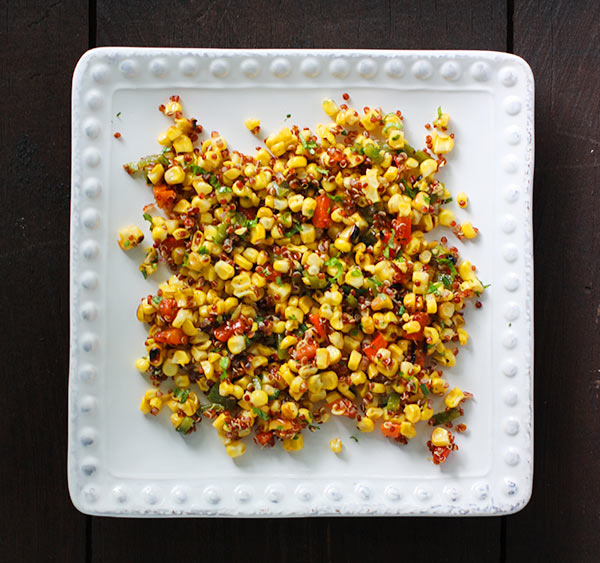 I know summer isn’t quite here yet, but, I’m already kind of smitten with summer produce. The spring stars and good gardening mojo aligned perfectly and my summer vegetable gardens just took off like a shot. I’m harvesting cherry tomatoes daily. (Okay, so it’s just one or two per day, but guys, it’s barely mid-June and Ohio Valley home garden tomatoes don’t normally begin ripening until after the 4th of July.) I have green bell peppers (plural) ready to pick (although I’ll let them fully ripen to a bright, sweet red). Poblanos, jalapeños, and serranos are close behind. My first cucumber is ready to pick. My herb garden has been in full glorious greenery for weeks.

It’s hard to give asparagus its due when tomatoes and basil and cucumbers are calling my name from my own yard. 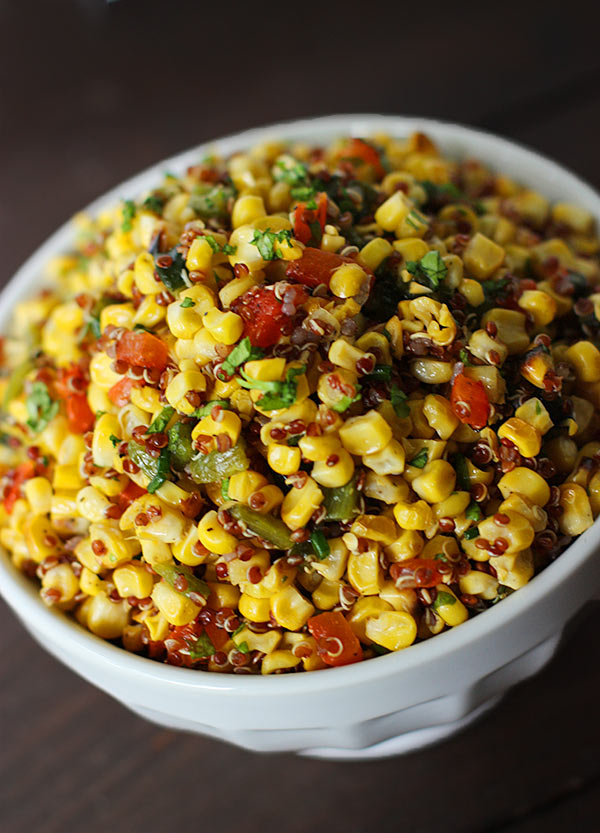 So, in my book, of the summery vegetables and herbs in this colorful salad, only corn is still slightly out of season at this point (shipped up from the South to a Kroger near me — thanks, South!).

I’m so excited for fresh, crispy salads like this one, full of grilled corn and peppers, protein-packed quinoa and fresh, pungent herbs. June and September are my favorite months to grill, and I’ve been taking every advantage of the fantastic weather. (Once sticky tropical August heat arrives, cooking becomes miserable both inside and out, unless I’m grilling something low and slow outside that lets me spend lots of time inside in the air conditioning.) 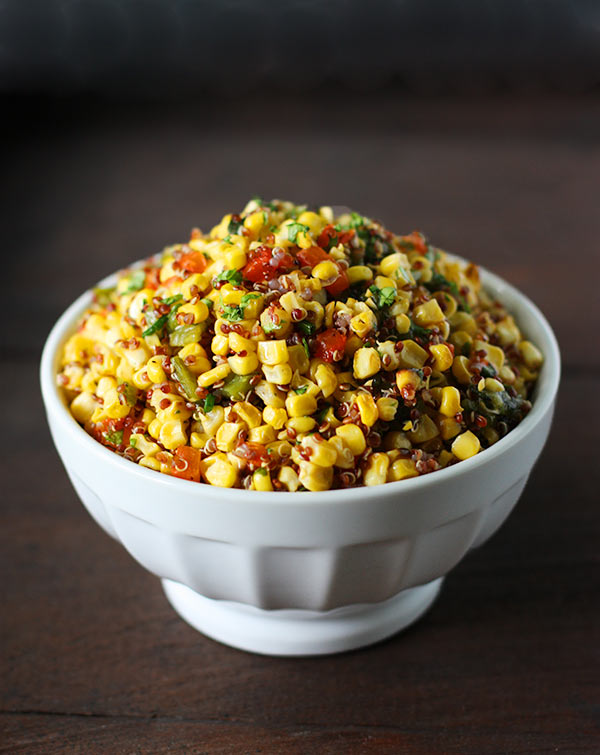 But, if you’re not quite up for grilling yet, you can roast the vegetables under the broiler. Or — as I plan on doing as summer heat progresses — you can prepare this raw: sweet corn, straight from the cob (uncooked!), chopped peppers, quinoa, and herbs, tossed lightly with olive oil and salt and pepper. Oh my crunchy yum.

And did I mention the citrusy sesame dressing? An unexpected nutty-savory twist, brightened with a splash of orange juice. The dressing is optional but takes mere minutes to pull together, and turns a satisfying vegetable toss into something really special.

for the optional sesame dressing

*This recipe is a great use for leftover quinoa, but if you need to cook some fresh: bring 1 cup of water to a boil and add 1/2 cup rinsed quinoa. Reduce heat to maintain a simmer, cover, and cook 15 minutes or until the water has evaporated and the curlicues have separated from the seed. I recommend doubling or tripling the amounts and freezing the extras.
Nutritional information, if shown, is provided as a courtesy only, and is not to be taken as medical information or advice. The nutritional values of your preparation of this recipe are impacted by several factors, including, but not limited to, the ingredient brands you use, any substitutions or measurement changes you make, and measuring accuracy.

You're harvesting something from your garden? Let me back up. You have a garden where things are growing? In this part of the country, planting before Memorial Day can be risky, as I've learned to my one-year-we-tried-three-sets-of-plants misfortune. *sigh*

I can, however, haunt the farmers' markets and still make this gorgeous salad, just not from the ground up. That counts, right?

That totally counts! :) The Ohio Valley is farm country - in normal years, I start planting my summer crops in April. This year, well ... this year was just all over the place. We had frost and upper 80 degrees in the same week in May. Tomatoes are such funny plants. They like cool evenings to recharge. They like very warm days to flower and set fruit. They like very hot days to ripen said fruit ... but then you need those [cooler] warm days again to set more fruit. Apparently, the crazy ups and downs were perfect for fickle tomatoes - the timing hit them just right on all accounts. And, for the first year in a long time, I managed enough restraint to plant only what I could handle, and all of my gardens are getting proper attention. (Although, I seeded corn (and spaghetti squash) at the last minute and am ridiculously excited about picking my own Silver Queen in August. Every morning I go out and the stalks seemed to have grown a foot overnight. Squee!)