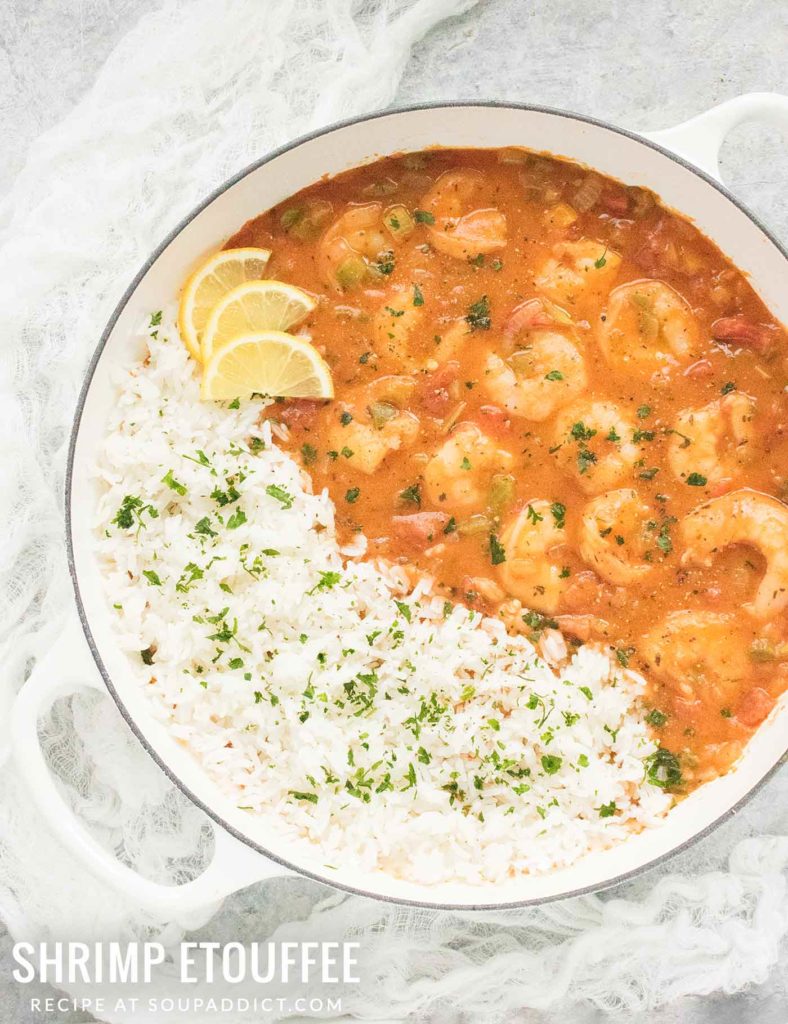 A classic Southern dish, Shrimp Etouffee is a winter cozy stew, with succulent shrimp and Creole seasonings, just in time for Mardi Gras and snowy evenings. Instructions for making a blonde roux included!

Mardi Gras’ timing in the middle of winter is so fortunate for us mere mortals, because those classic New Orleans dishes come fully and purposefully into season, just when we need cozy comfort and indulgence the most.

I’m not the least bit Southern, but I have an enormous appreciation of the Creole flavor palate, from the Holy Trinity of aromatics – onions, celery, bell peppers – to creole seasonings to the seafood focus (especially shellfish).

And the lovely thing about Shrimp Etouffee is that it’s a distinctly Louisiana dish, but, unlike its cousins jambalaya and gumbo, which have a little bit of hoopla involved (not much, but some), etouffee can be a weeknight easy dish, even with the roux.

Now, if you happen to be making this on the weekend, you can take the full-flavored Cajun/Creole “smothering” cooking route, which is basically just covering and braising the stew over low heat, like you might a bolognese.

But for this preparation, I’m skipping the braise, knowing that the roux and the Creole spices will add loads of flavor and a shortened cooking time that post-work me appreciates. “Etouffee” actually means smothered, so I know I’m bucking tradition, but it’s ever so lovely to have such a dish during the week that I hope I can be forgiven.

How to Make a Blonde Roux

I use a blonde roux for Shrimp Etouffee, the process for which takes just enough time to make you feel like you’re channeling the spirit of New Orleans, without the standing interminably behind the stove. It’s really easy, almost foolproof!

Eyes on the Roux!

And that’s your roux! Now you’re ready to continue the recipe, as easy as any soup!

If you have a favorite Southern hot sauce, you can add a few shakes right in there. That’s not my jam, but it’s perfectly traditional! 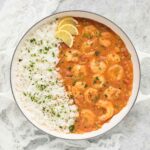 Calories: 310kcal
Nutritional information, if shown, is provided as a courtesy only, and is not to be taken as medical information or advice. The nutritional values of your preparation of this recipe are impacted by several factors, including, but not limited to, the ingredient brands you use, any substitutions or measurement changes you make, and measuring accuracy.
179 shares
Click here to cancel reply.

Do not include the extra salt. Your creole seasoning should have plenty, and additional salt can always be added!

Made this recipe last night and it was fabulous! I didn’t have any regular diced tomatoes in my cabinet, so I used a can of regular Ro-tel and it turned out quite tasty. I also added extra cayenne to bring up the heat and about 1 cup extra broth to make it a little thinner.